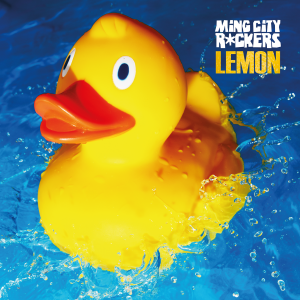 This is The Ming City Rockers second album after a rollicking good start with the 2014 garage-y self-titled album which I reviewed here.

They’ve clearly (and rightly) assumed that you can’t get too much of a winning thing and this new album, Lemon, takes off where the debut finished with added verve and a couple of years of experience flung headlong into the mix. The callow bouyancy remains, as does the ridiculously tight trousers, eye-liner and dragged-through-the-bush-you’ve-slept-under hair but they’ve spiced the songwriting up with a real cultivation of the three chord bluster and suicidal velocity of their debut album.

Taking themselves to Chicago and Steve Albini’s Electrical Audio Studios has been a good move; Albini is firstly a show-stopper of a name to be associated with, given his grunge pedigree, and secondly he’s probably the perfect producer for this type of grown-in-the-garage music. It sounds to me as if Albini has left the band to make their own decisions without guiding them too much and let them find their feet in the studio. Albini is not one for studio trickery and window-dressing; he has a way of capturing the rawness and ferocity of a band whilst never losing sight of the songs. Witness In Utero; Cobain’s songs were as raw as hell but the brutalist production gave that album a typical Albini edge.

The Mings debut album was a snotty, amphetamine rush of a record. It barely got to the thirty minute mark with its verging-on-falling-apart clattering songs. The sheer frustration and boredom, not to mention the casual violence, of small British towns was writ large across its sneering face and was easily one of the best debuts by a young band that year.

Lemon is definitely a more mature record. That is if you consider self-destructive anthems, sarcasm-dripping lyrics and scything guitars mature. The songs have a depth not heard on the debut and the production, while not being remotely shiny or sugar coated, has added a veneer of sophistication that suits the songs.

Sell Me A Lemon crashes in like an uninvited gatecrasher; sneering attitude meets pop smarts in a shabby shopping precinct off license. They’ve clearly been listening to a bit of Buzzcocks- no bad thing.

The cloying claustrophobia of small town England that coloured their debut remains; All I Want To Do Is Waste My Time With You is a malevolent presence wrapped up in a blistering pop-punk package. the beauty of The Mings is their ability to take suburban everyman themes and  craft them on to something that sounds like it makes sense wherever you are in the world.

There’s even a little bit of punky-reggae influence on Lemon with the Clash-like and fabulously titled Trying To Find Pixies. They even find time to cover Hawkwind’s long-lost Death Trap, making it sound like one of their own. Lemon channels their beloved Stooges and MC5 and broadens the bands influences to take them in a direction that’s less of the feral blaze of the debut whilst keeping their eye very much on the ball. There’s a finesse and worldliness about the band, now, that really suits the material.

Lemon is a real leap forward for a band that are going places. And I don’t mean Immingham bus station…