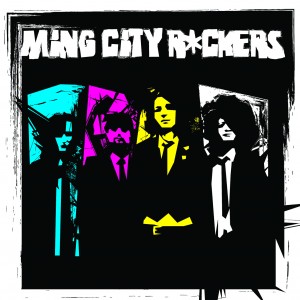 With The Dolls hair, The Manics attitude and a whole lot of lo-fi riffing, the MCR’s debut album does what it says on the tin. Joe Whyte reviews.

Without being too harsh, Ming City Rockers aren’t doing anything particularly earth-shatteringly new, but they are doing it with a whole lot of gusto, energy and that essential ingredient, fun. Remember when music used to be fun?

They’re natives of Immingham, hence the name, apparently a chemical-stained industrial wasteland that shrieks boredom, pound shops and cut-price casual violence. Rising above the torpor of their town, they’ve grasped the nettle of glamour, great hair and loud guitars and ran riot with it. This is their debut album, following a few well-received singles and it does exactly as you’d expect it to. Fast and furious for the most part, its ingredients are the punk-rock and roll staples of girls, cars, guns and guitars with a helping of drugs, drudgery and heartbreak to sweeten the deal.

It’s short and sweet; thirty minutes or so and you’re done, but it begs repeated listenings. Under the fairly murky production are some stiletto-sharp songs, all careening riffs and yelping vocals. If you’re a fan of garage rock played like it’s the last thing the youthful band will ever do before they self-immolate, this is for you. The Gun Club, The Ramones and The Hives are all touchstones but there is, most definitely, a very British sensibility throughout. 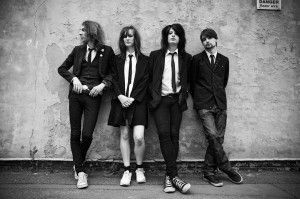 Take the groups’ cover of the Robert Johnston standard Crossroads; played in their own inimitable style of breakneck carnage, one can picture the crossroads being some late night suburban taxi rank with a chip shop on the corner and alcopop-girls walking barefoot rather than the titular deep South dust bowl. One can imagine them being at more danger from some shell-suited bonehead rather than ever having hellhounds on their trail. This is a good thing. It gives the song a bit of MCR identity and fits with their youthful exuberance.

Chic and The Motherfuckers was the earlier single from the album and it’s a great taster for their stock-in-trade. It’s rather good. And no, I’ve no idea what it’s about either…

Rosetta is the stand-out track for me and marries the MCR’s nuclear assault with some quite gorgeous melodic flourishes. For such a young band, they’ve absorbed their influences and while they’re never entirely far from them, they really make the sound their own through the sheer gusto of their playing.

As a debut album, this will do nicely. I reckon there’s a lot more to come from these young rascals.