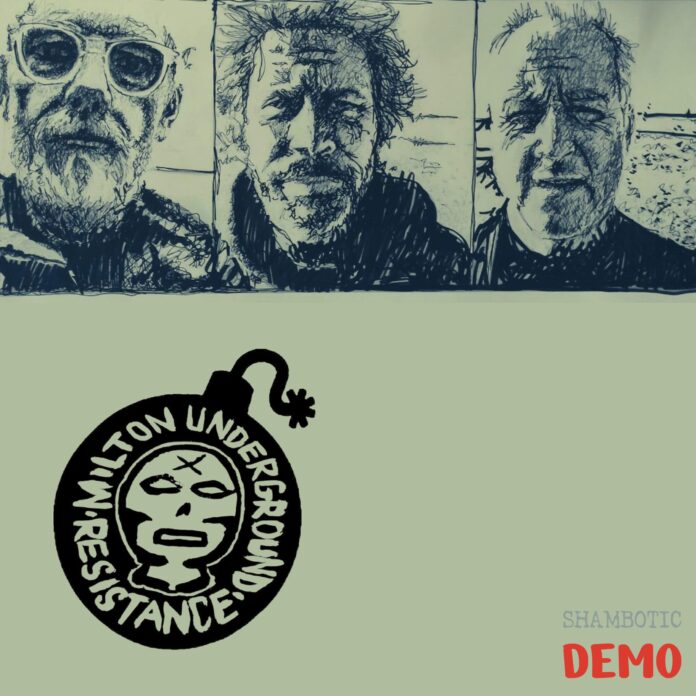 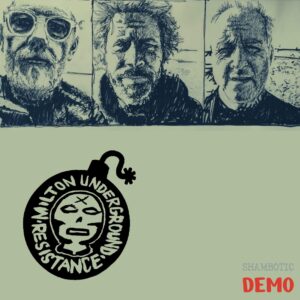 A new band of old-timers. An album entitled ‘Demo’. Lockdown jam sessions that have produced near-perfect alternative-pop songs.  Meet the Milton Underground Resistance. They have come to save us, says Ged Babey.

There…she…goes… There she goes again.  (The La’s).

No blind-spots in the leopards eyes….  (Wire)

What goes on in your mind, I think that I am falling down (Velvets)

Yeah, said it’s all right. I won’t forget, all the times I’ve waited patiently for you   (Love)

Yeah, I know. It does seem like a huge exaggeration to say that these eight songs compare with such utter classics as the aforementioned, but they do. Really.

Just read no further and listen to this one for example. The first one I heard, that got me hooked.

Must be a fluke. The others can’t be that good, can they?

Well, try this. Singer Simon Holliday is just in such great voice on this. It’s a bit Syd Barrett, a bit Peter Perrett but is just so perfect (Tries to think of an analogy that’s not the old -a voice like honey dripping off a spoon…)

I first met Duffield and Hutchinson probably thirty-five years back (jeez!) when they were in The Mild-Mannered Janitors – one of Portsmouths greatest bands. Duffield has seen active service since as part of the Steve Mason band, Beta Band, King Biscuit Time, Knave, Green Hornets, Rems….  Hutch has given up trying to compete with the over-achieving beard monster.

I’m always interested in what the former Mild Mannered Janitors are up to. (Singer & guitarist Steve Lymphany also posted some amazing bedroom recordings over lockdown) but I was seriously surprised at how immediate and excellent these songs are.

Third piece of audio-video evidence – I love the glam-style Sweeney-theme-tune guitar sound on this one!

Each song is different to the last, there is no formula to this band. The only uniformity is that every song is brilliant.

Put On This World is Chairs Missing era Wire with a world-weary Perrett style vocal.

Political Messiah channels the Stooges whilst Evil Eye rocks like an Aussie garage band. Rain People is kinda Beta Band, whilst Mockery has a jazzy time signature and is a Brel-like waltz.

Released on Tiley-Evills label Shambotic, home of the future cult hits, this is just a plain, simple work of natural genius.

No gimmicks, no trends followed, just great songs that are both immediate and interesting the more you hear them.  Despite my numerous comparisons to other bands, the Milton Underground Resistance have a distinct sonic identity and obvious chemistry. Join the Resistance…

My head is full of city noise, but I still hear your voice…  (MUR)

I can’t sleep, my mind is playing tricks-on-me…  (MUR)

Something from nothing, anything at all.    (MUR)

Buy from Amazon or Spotify