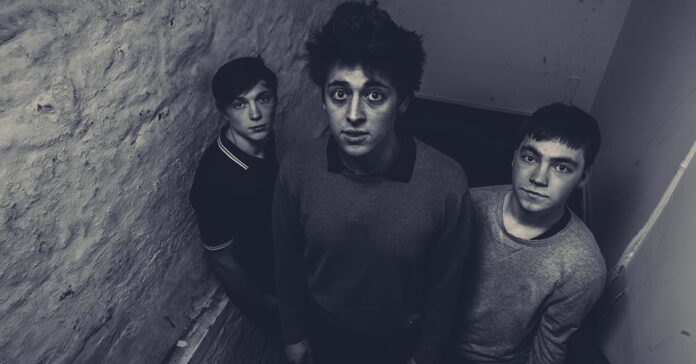 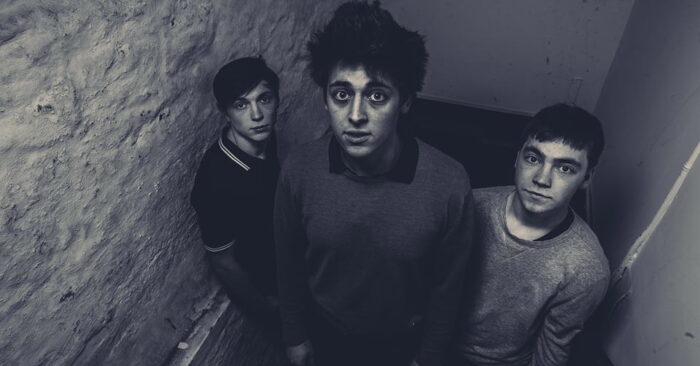 Following his perfect, 10 / 10 review for Milo’s Planes new – and excellent – album, Aural Palate Cleaning Exercises, Ben Tansey tracked the band down to their Bristol home for a chat about this remarkable achievement.

“Play whatever you like, just no slap bass.” Those were Joe Sherrin’s instructions to new bassist Charlie Horne upon his recruitment to help fill out the low end of Milo’s Planes’ live sound. Before Charlie joined in December of 2013 Milo’s had consisted of Joe (guitar, vox) and his brother Harry (drums).  Squeezed into Harry’s bedroom with a single mic and an old 16-track recorder Joe would lay down the bass parts himself, underpinning his own frenetic guitar lines. “The problem with recording at home was I couldn’t get a good distorted bass sound” remembers Joe.  The band’s debut album, ‘Aural Palette Cleaning Exercises’ (which I enthusiastically awarded 10/10 in a review back in March), was actually finished at the end of 2013 and is as lo fi as they come which, in my opinion, makes it all the more charming; the very definition of a diamond in the rough.  They’ve been working on the follow up at Bink Bonk studios with producer Matt Sampson, this time with Charlie behind the bass and lots of dirty, fuzzy low end to replicate their heavier live sound.

The year long gap between completion and release they attribute to trying – and failing – to organise a tour, looking – and, again, failing – to find a label to release the album and making a video for their single “Two Feet In a Crowd” on the oldest computer in the south west.  It’s the story of a band high on talent and low on luck, sending out a whirlwind of emails and getting nothing in response.

Joe has been part of the Bristol scene for some time, playing with Holy Stain and Let’s Kill Janice, the former being the first band to sign to the blossoming Howling Owl label.  One wonders how he finds the time to hold down a job (“something to do with mortgages” he tells me) as well as three bands.  With Milo’s Planes he’s brought his younger brother Harry and Charlie, Harry’s friend from school, along for the ride, leading them astray as all older brothers should.  “Their parents must be so proud” comes the sarcastic sample of a presenter from BCFM at the end of “Whilst It’s Precise“.  They should be.

The writing and recording of ‘Aural Palette Cleaning Exercises’ was mostly guided by Joe.  He recalls having to drive home in his lunch breaks to record vocal parts whilst the house was empty.  Album number two will see Milo’s Planes taking a more equal role in composition, and swapping the bedroom for the studio.  Of course the crux of the album is the brothers’ sharp songwriting and electric playing but part of the charm of ‘Aural Palette…’ is certainly its lo fi credentials.  I for one certainly hope the studio won’t be responsible for any drop in immediacy.

Keen to avoid another year long wait and to capitalise on their rising star Milo’s intend to release two cover songs for free in the coming months, one of which being live favourite “Sister Ray”, to give audiences a flavour of the new things to come.

It must be strange promoting an album when you’ve already played its songs to death and you’re more consumed with new material.  This occurs to me as, a week on, I’m at the Louisiana watching the band at their album launch.  Everyone seems to buzz with excitement, it’s the sort of receptive crowd every band wants to play to.  All the songs I recognise from ‘Aural Palette…’ zip along slightly faster than usual and much louder.  Whilst the more intricate of Joe’s guitar lines slightly lack clarity the energy is without question.  Harry kicks the shit out of the bass drum and doesn’t let the tempo drop for a second.  Charlie’s bass thumps underneath, with not a slap in sight.  The new songs, as the band promised, sound fuller and heavier.  The band close their set with the now obligatory of the Velvet Underground’s “Sister Ray” which seems to have about seven endings before starting back up, much to the joy of every sweaty audience member.

Back to the interview and I ask the lads what’s next for them.  Harry will be relocating to Manchester to go to university in October, whilst Joe and Charlie are hoping this will help the band infiltrate the north and break out of Bristol.  The new album is also on its way and they intend to perform it in its entirety at a show in Bristol before Harry leaves.

This separation could spell the end for some bands but Milo’s have weathered worse than this.  We’ll definitely be seeing much more of them in the future.

~
Milo’s Planes are playing Bristol Harbourside festival in July and they’re also supporting Pile at the Louisiana on Friday 12th June.
Milo’s Planes can be found on Facebook and they tweet as @MilosPlanes. Find out more about them – and / or buy the album at their Big Cartel.