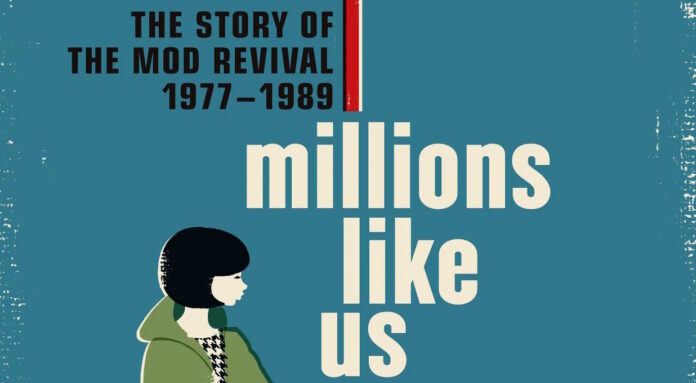 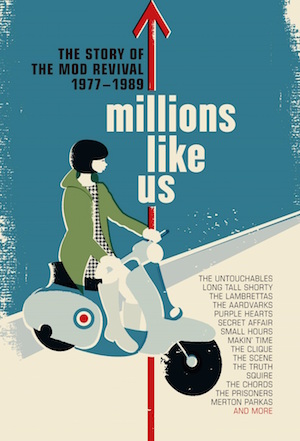 We are the Mods, We are the Mods…. 100 songs by smart young men with guitars. A definitive musical collection which should interest more than just people who were there in their parkas, fighting on the beaches, says Ged Babey.

Compiled by the people who brought us the Scared To Get Happy story of indie-pop, this is another beautifully packaged box set to sit alongside that one and the 1,2,3,4 Punk & New Wave box.

The Mod Revival and its followers was endlessly slagged off and slated at the time by the music press, the ‘opposition’ and the kids on the street who weren’t converts.  Bikers laughed at their scooters with their hairdryer engines.  Punks slagged off Mods for wearing suits hack-putt.  Skinheads thought Mods were poofs for always combing their hair.  Mods were ‘sheep’ who all dressed the same according to their detractors.

Despite being a fully-paid up punk-for-life, I personally had a grudging respect for Mods. My cousin was one.  This Is The Modern World was one of my favourite albums.  I loved the Purple Hearts Million Like Us when I first heard it. I even owned a couple of nice button-down collar Ben Shermans acquired from charity shops. Buzzcocks always had a touch of Mod about them and Generation X were probably as influenced by the Who as the Jam were initially musicwise.

(Later) I found The Exploiteds song Fuck A Mod a vile piece of pointless aggression aimed at an underdeserving target (on the back of a parka). By all means fuck the police, government and so on, but Mods were harmless and just kids too young for punk who wanted their own piece of the action. That said, Secret Affairs ” We hate the punk elite” line (which was about Julie Burchill/Tony Parsons specifically) didn’t help matters on the streets of provincial towns.

I can remember in about 1980 hanging around the precinct and an approaching gang of mods out-numbering us three ‘punk wankers’ so we ‘ad it on our toes.  As we were running thru the multi-storey car-park being chased by them my mate said “What the fuck are we doing?  They’re all about 14!” So we stopped, made ugly warlike faces and went Waaaahh!!! and charged at the Mods who shat ’emselves and legged it. (We were about 16 or 17 and the least ‘hard’ people we knew!) Enough small-town nostalgia… 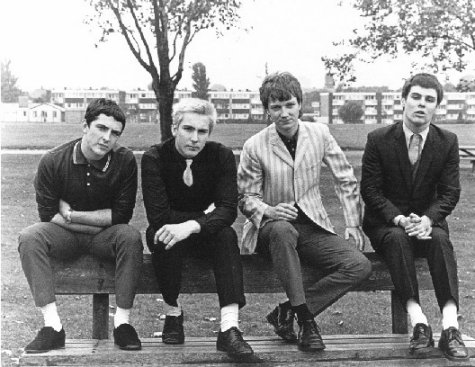 Everyone loved the Jam, a band undeniably as important, influential as the Pistols and the Clash, if not more so. Mod Revivalists were dismissed as bands who wanted to be the Jam.  Listening back now to these 95 or so artists, it is apparent how much  Weller and co were a huge influence on a sizeable proportion of these bands, but by no means all.  (By CD3 there are even a few Style Council clones!)   Covering a 12 year period as it does there are many flavours of mod on offer.  Some were not even self-confessed mods at all.

Shane McGowans the Nips went thru punk, Ted and Mod phases with each single they released before his Irish roots became his true calling. Gabrielle, included here, is a beaut.

Seventeen’s bank holiday-themed single was textbook mod but they became the Alarm once their hair grew.

There were many a punk-turned-Mod group but the truly buck-chasing trend-hoppers showed their true colours when they ended up in bands like Blue Zoo and Johnny Hates Jazz.  (I’m not naming names, you’ll have to buy the box and its booklet with extensive sleeve notes and potted histories…)

Disc One is arguably the best of the four as it features many of the punkier originators or bands that ended up mod-by -association. Strangeways were a shit-hot power-pop new wave band who seemed to yearn to be the Only Ones. They had a song relegated to the b-side about the original 60’s Mods called All The Sounds of Fear. Its an absolute corker.

The Reaction were Mark Hollis from Talk Talks punk band with Mod leanings who also appeared on the Beggars Banquet Streets punk compilation. Although by no means essential it is competent stuff and interesting listening and by no means an embarrassing de-closeted skeleton.

Speedball featured Guy Pratt on bass (who’s dad starred in Randall & Hopkirk Deceased) and sound fabulous based on this track, which has a touch of the Skids about the guitar.

The Donkeys were mullet-haired favourites of Peel – their What I Want an absolute gem.

The song which gives the boxed set its name by the Purple Hearts is pretty much unbeatable and would’ve sounded just as magnificent if it had been released in 1969 or 1989.  Along with the Chords (a band highly rated by several friends of mine, but who I never particularly got at the time) the Purple Hearts seemed to be the brand leaders as far as punk-inspired Mod was concerned.

Secret Affair seemed to reap the rewards as far as getting on TV, radio and in Smash Hits was concerned. Time For Action is undeniable anthemic and catchy but has become a totemic lightning rod for criticism of Mod.  For a band with a brass section they seemed to lack the soul and passion of Dexys and somehow you could always hear Strummer singing that line about Burton suits whenever you saw Ian Pages smug face.  Their later single My World with its lush, cheesy strings sounds like a Cilla Black song before the vocals come in!

The so called all-rans with names like The Scene, the Small Hours, the Parking Meters, the London Buses, (yeah I’ve made some of those up to confuse the obscurist collectors) all had their moments but the low-budget production and identikit themes of girls, dancing, looking good, Saturday nights start to grate after a while.  There are a few songs with a bit of social commentary but not many.

Young guns like Untamed Youth, Mod’s Eater, attempt to let their enthusiasm triumph over their ability, making Squire and the Lambrettas appear to be masters of their art.

The second and third cd’s sees a shift away from Jam influenced to bands with a bit more of a soul / motown feel, the odd Merseybeat revivalist, and a few oddballs like the Mod bands which seemed to have singers influenced by Ian Curtis and Marc Almond.  The Upset and their song Only For Sheep is a fantastic piece of Mod Post Punk crossover which was previously unreleased, as was a song called Fuck Art Lets Dance by the Name, which only came out in a censored version.

Red Beans and Rice, Q-Tips and Nine Below Zero’s contributions sound rootsy, fresh and surprisingly enjoyable up against the more Mod-by-numbers selections.

An early incarnation of Five Thirty  or 5.30! are included alongside Garage/Psych bands like the Prisoners and the fabulous Studio 68 on CD4.   Ed Balls The Times and some artistes signed to Dan Treacys Whaam label seal a connection with the C86 scene.

Three American bands, one Irish but its mainly UK bands and pretty much all-male apart from two female singers, one of whom was called Eleanor Rigby with a piece of Modsploitation called I Want To Sleep With You.

The James Taylor Quartet, the Cigarettes  and the Nips are bands whose priceless  back catalogues I’ve had and loved for years but now, thanks to this comp I wanna get hold of the Chords,  Clique, the Jolt, the Aardvarks, Speedball and Strangeways.  Proving that there was a lot of interesting bands within the Mod sphere as well as some quite dodgy ones

It is a mixed bag of delights and dodgyness but once you’ve set aside any prejudice about the whole Mod label these are simply a load of white-boy 4-piece guitar bands competing for attention in the post-punk years – with Oi, Two-Tone, Art-punk, early-Goth, Anarcho, New Jazz, New Romantic and electronic competition.  Its just astounding to think how much music there was around in 1979 -82. It certain was the time for action. (Boom-boon-tisk) and this collection is I would say as enjoyable and just as important as Lenny Kayes Nuggets.

Millions Like Us can be pre-ordered from Cherry Red here.

All words Ged Babey. More writing by ged on Louder Than War can be found at his author’s archive.