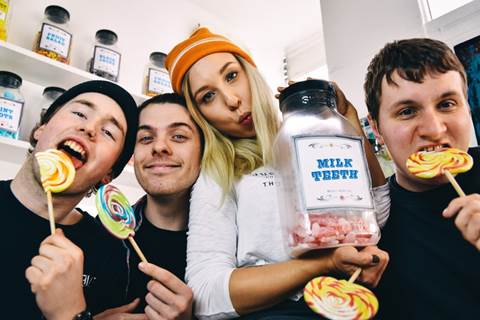 Oft tipped for great things in the alt-rock scene, Gloucestershire’s Milk Teeth have announced they’ll be sharing the stage opening for Good Charlotte this November and December.  they’ll be providing support to the Maryland punk rockers along with Against The Current and Nothing, Nowhere. This is a positive opportunity for the young band to gain a whole host of new fans.

Marking the announcement, Milk Teeth have shared a new rousing live video Fight Skirt from their Be Nice EP, released on Roadrunner records earlier this year. The video includes footage from a selection of their most recent shows, impeccably capturing the dynamism of the band’s auditory onslaught and performances that motivate crazy and chaotic fan scenes.

This year has been a fantastically frantic one for Milk Teeth not only did they complete their own headline tour; Their debut performances at the Slam Dunk Festival saw Kerrang!, Team Rock and NME all select them as one of the highlight of the weekend. The band also rocked 2000 Trees, Hit The Deck and Amplified. This latest support slot in November and December means Milk Teeth will be ending the year as they have experienced it from the start – on a high.

Milk Teeth will be performing on the following Good Charlotte dates;

Tickets are available from many of the usual tickets retailers including See Tickets.

Article by Katie Clare. More articles, reviews and interviews written by Katie on Louder Than War can be found at her author’s archive. Katie can also be found on Twitter where she tweets as @tokyo_katie.