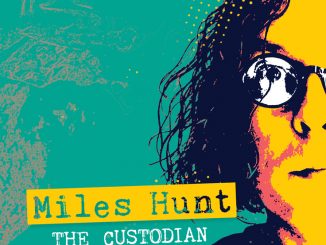 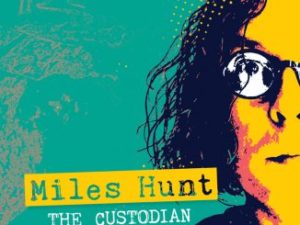 Miles Hunt, The Wonder Stuff and Vent 414 frontman, more recently having released material with Erica Nockalls, is soon to release a solo album “The Custodian.” The oft sneering and acerbic tongued frontman releases the double CD of 30 acoustic songs covering his entire back catalogue on October 5th.

In the run up to the release Miles is dropping a number of videos of tracks from the album. This week it is the turn of “I Think I Must’ve Had Something Really Useful to Say.” This pared back version of the song from Construction Time for the Modern Idiot era of The Wonder Stuff was previously released as a b-side to Hot Love Now! Miles has stripped out all of the brass and flourishes to give the song an more earnest feel than the original.

“Hunt says that the idea of becoming The Custodian came from a conversation with one of his musical heroes. “I was in New York a few years back and was invited to guest at a Tom Robinson solo show. Tom has long been an inspiration to me and given the opportunity to perform with him… well, lets just say I couldn’t polish my boots quick enough. During our brief rehearsal together on the afternoon of the show Tom asked me who I felt now owned the songs that I have written over all these years. I answered that whoever the publishing company I signed with probably did, but ultimately, I did. Tom was quick to correct me pointing out that all of my songs now belonged to my audience. Going on to explain that the songs I have written have been part of the sound track to thousands of people’s live and it is those people that now truly own them. He said that my position was now of The Custodian, the person whose job it is to see that the songs are treated and performed with the respect the audiences deserve. It was an incredibly important thing to have said to me and something I have not and will not ever forget.”

With this in mind Hunt has rehearsed over sixty of his best loved compositions to perform in chronological order on his upcoming UK tour. “There are a couple of songs from the back catalogue that I just couldn’t bring myself to sing again. Either a lazy or nonsense lyric, or just a rotten set of chords. When you’ve been at it as long as I have I don’t think anyone could expect a 100% strike rate. But really there are only two or three songs I would prefer no to revisit.” As well as performing songs Hunt will also be reading a handful of excerpts from his three acclaimed books, ‘The Wonder Stuff Diaries’. “I’m so very thankful to my younger self for keeping hand written diaries during the early years of The Wonder Stuff’s activities. I’m fortunate that I do have a pretty decent memory of what went on in those days, but to have the actual voice from the past, recorded on the page, to tell me straight how things were and how I felt about what was going on, well, I would like to buy that young man a beer for having the foresight to give such a gift to his elder self.”

You can pre-order The Custodian here

Watch out for a review of The Custodian on Louder Than War in the coming weeks.