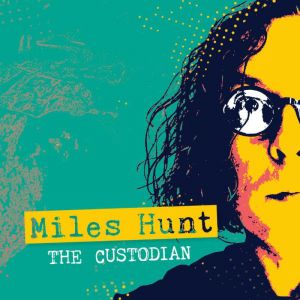 Who is The Custodian? He of the curly locks, acerbic wit and acid tongue, frontman of Black Country heroes The Wonder Stuff, Miles Hunt, releases a double album of acoustic tracks from across all incarnations of the band, and including Vent 414, solo material and collaborations.

This compilation will delight both dedicated Hunt fans and fans who thought The Wonder Stuff ended after they split in 1994 following Construction for the Modern Idiot. The 30 (count ‘em) chronologically presented tracks on offer here have been carefully selected by Miles and rehearsed (along with another 30) for the upcoming Custodian tour.

Why The Custodian? Well, apparently it comes from a conversation with Tom Robinson when Miles appeared as his guest. Robinson explained that a bands back catalogue belonged to the audience, songs that sound-tracked the life of their thousands of fans. Miles job was therefore now as “The Custodian” and had a responsibility to treat and perform the songs with the respect they deserve.

Given that The Wonder Stuff were a band that had an impact on my late teens/early twenties self and witnessed the band live on several occasions, usually with the ubiquitous Neds Atomic Dustbin in tow, along with another accomplished set of musicians such as Mega City Four or Senseless Things, this tale struck a chord with me.

Thankfully, this conversation has clearly struck also a chord and stuck with Miles, hence this double album of re-recorded Stuffies classics. This isn’t a greatest hits selection, though it does feature some of the band’s biggest hits. No, this is a specially selected set of songs, one or two from each album or incarnation/collaboration, each carefully chosen by Miles and given the due deference and sensitive treatment suggested by Robinson.

The vast majority of the songs here are instantly recognisable, despite being acoustic the bombast of the tunes and lyrics is undeniably The Wonder Stuff. However, many of the songs are almost unrecognisable. Don’t misunderstand me here though. When I make this statement I mean it in a positive way. I don’t mean you won’t recognise them, they’ve just been given a makeover and the result is a totally new take on some old songs.

Take one of the biggest hits by the boys from the Black Country, 1991’s Size of a Cow. Released in the same year as their collaboration on Dizzy with Vic Reeves, the song has always been a bit marmite. Over time, I grew to detest this song. However, the treatment the song has been given here strips away any of the overblown almost comedic aspects of the original and reveals it as it is, a great song that is actually fairly dark in its outlook and lyrics.

It isn’t the only song by The Wonder Stuff to be dark and each of these songs is treated with the respect they deserve with the stripped back nature of some of the tracks injecting them with a new lease of life. Like so many songs on this offering, On The Ropes has all the layers all peeled away revealing its very core and unearthing the essence at the songs heart.

There are plenty of highlights all the way through this album. It’s Not True from the band’s debut A Wonderful Day EP right through to The Sweetest of Bitterest Ends from We Came Here to Work and the eponymously titled Custodian. One of my personal favourites, Unbearable loses none of its twisted sneering fervour, while b-side I Think I Must’ve Had Something Really Useful to Say proves itself as deserving much more than its original status as a flip side. Vent 414’s Fixer also fairs exceedingly well in its exposed state and the impassioned plea of Everything Is Not Okay is fairly representative of the state of the world today.

If this release represents only half of the songs Miles has been rehearsing for the upcoming tour to support the release, I’m looking forward to hearing what other treats he may have in store in the live arena. A very worthy released which has re-ignited my love of all things The Wonder Stuff, Black Country and Grebo.