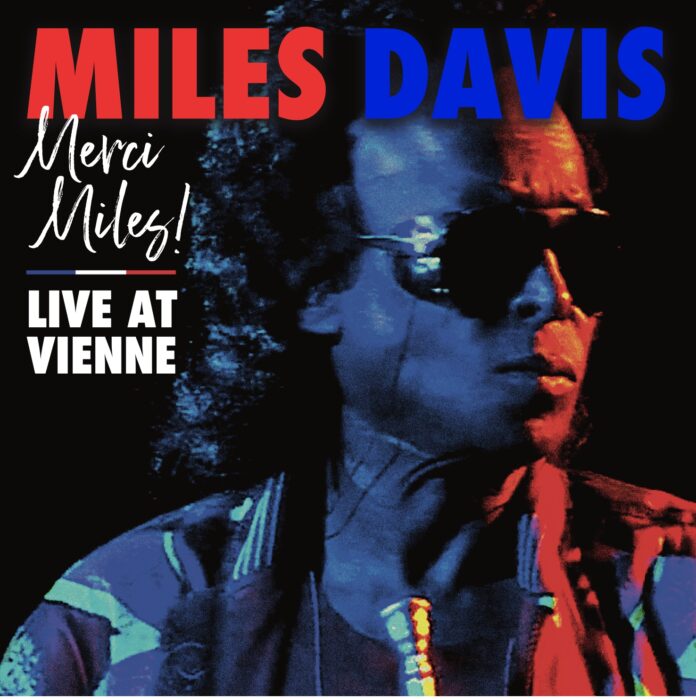 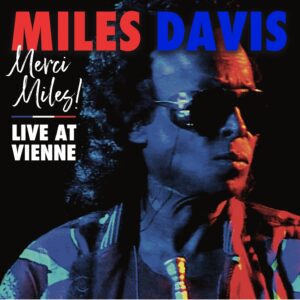 Almost thirty years ago to the day, Miles Davis headlined the legendary Jazz à Vienne festival. Tragically, it was to be one of his last performances. Now, finally, the tapes from that night are released and they are quite magnificent. Merci Miles! is a phenomenal reminder of just how special this artist was. Gordon Rutherford reviews for Louder Than War.

The setting couldn’t be more grandiose. We are in an ancient Roman amphitheatre, packed with thousands of music lovers fanning out from the stage. The mercury runs high on summer evenings in south-east France and the combination of the stone seats and the heat don’t make it too comfortable. But tonight, comfort is irrelevant. This audience have loftier contemplations because they are experiencing eighty minutes that will stay with them forever. Opening night of the legendary Jazz à Vienne festival is always a big deal and this renewal is even more special than usual, because the headliner is le roi de jazz, Miles Davis. It’s the 1st July 1991 and although they don’t realise it, those transfixed audience members are witnessing one of the maestro’s last concerts. A mere ninety days later, he was gone forever.

Everyone’s a legend now. It’s a throwaway term that has become utterly devalued. In the old currency, Miles Davis was a bona fide legend. He was an icon, one of a very select few. Just days after this concert, he was awarded France’s highest decoration, the Légion d’Honneur. When awarding him with this, French culture minister, Jack Lang, described him as the “Picasso of Jazz”. Nailed it, Jack. Now, at last, almost thirty years to the day after the event itself, we can actually hear this momentous concert as performed by this most crucial artist. Merci Miles! has been released as part of Rhino Records’ Black Music Month celebration and we should all be grateful for that.

Imagine the Manic Street Preachers headlining Glastonbury and only playing tracks from their last two albums. Merci Miles! is a bit like that. There’s no So What or ‘Round Midnight. Nothing from Sketches of Spain or Bitches Brew. Despite the magnitude of this gig, Miles stayed true to himself. One wonders how he would fare today, as festivals have become uber-commercialised forms of music tourism, where artists are ‘encouraged’ to “shut up and play the hits” (© LCD Soundsystem). Miles Davis, always looking forward, never was one for turning up and complying. But rest assured, the performance captured on Merci Miles! doesn’t suffer by virtue of that. He may well be sticking to relatively recent material in this set, but it’s still Miles and he proves that he is still more than capable of delivering an exhilarating, incendiary performance.

So, given the absence of old favourites, what do we have in their stead? Well, for starters, there are two semi-composed Prince songs, Penetration and Jailbait. Miles had become friendly with Prince and it’s absolutely intriguing to ponder how both of these notoriously challenging band leaders functioned when in the same room together. Remember, this is peak Prince we are talking about, a period between Lovesexy and Diamonds and Pearls, before he went a bit eccentric with the face paint. Miles takes those raw compositions and moulds them into something electrifying. Penetration is pure funk, with a popping, kicking bassline from Richard Patterson that you want to run away to Gretna Green with and marry. It’s reminiscent of another Prince song, D.M.S.R., with that same swagger and sex appeal.

As well as allowing Patterson to shine, it’s a track that really showcases the dazzling keyboard skills of Deron Johnson and that is a theme of this entire performance. Sure, it’s Miles Davis and this is unquestionably his band. Throughout the show, he never leaves the eye of the storm, but like all great leaders, he knows how to utilise his resources smartly. Davis knows how good his band members are – hell, he recruited them – so he’s going to make sure he gets the best out of them. He is more than happy to allow them to step into the spotlight and carry off their solo, just as long as they don’t deviate too far from the maestro’s vision. The second Prince track, Jailbait, has a jazzier feel and summons the spirit of Gershwin. It’s a fantastic piece of storytelling, like Porgy And Bess, with an intense sense of drama. Miles’s trumpet licks are like a cat creeping home past midnight and the overall vibe is one of an oppressively hot and steamy mid-summer night in the city, so much so that as you listen to it you feel your shirt sticking to your skin.

The Prince influence goes much further than the two tracks mentioned above though. The entire concert has the feel of one of those famous Prince aftershows, you know the ones he would perform in a tiny club at 2 a.m. after having played the hits in an arena for three hours earlier that night? It’s a very funky, explosive set and there is that constant sense that anything could happen at any given time thanks to the continuous improvisation of the musicians. Then you realise that Prince’s freeform shows in the wee small hours were actually influenced by Miles much more than the other way around.

Two of the centrepiece tracks from Merci Miles! come from his 1985 album, You’re Under Arrest. Sure, you know these tunes and when Miles begins with that instantly recognisable melody from Michael Jackson’s Human Nature, it feels safe. But there’s more than eighteen minutes of this and by the time four of those minutes have elapsed, Davis and his band are meandering in a quite different direction, each taking turns to improvise around the core. It builds and grows and creeps menacingly, until Davis, alto saxophonist Kenny Garrett and the piccolo bass of Foley are stalking each other. Garrett breaks off into the spiritual Joshua Fit the Battle of Jericho before coming back to lead the track on a quite magnificent groove. Like one of those pipistrelles that come out to play in those French twilights, his alto soars and dives in pure unadulterated glory as he ushers in sheer bedlam. By the end, you are aware that Davis has taken an iconic tune, from one of the most famous albums of all time, and basically made it his own.

Conversely, Time After Time stays much more faithful to Cyndi Lauper’s original, all centred around that oh-so-familiar melody. But don’t assume that it’s a straightforward recreation. How could it be? Miles plays it atmospheric and spacious, slow and sublime. Sounding supreme, vintage Miles, he makes every note pierce out with absolute clarity from that scarlet trumpet. The applause that rings around the iconic amphitheatre at the end says it all.

Wrinkle opens up with a whip-cracking snare beat from the late, great Ricky Wellman before it develops into an intense bubbling cauldron. Johnson’s keys wail whilst Foley chops at his guitar. Patterson’s bass playing defies the laws of physics as he pops and pings. At one point the utter frenzy on stage is akin to the motor racing they have down the road in Monaco. Amandla, taken from Davis’s final studio album of the same name, is a quite different beast. If Wrinkle is all Formula One, Amandla is the golden sands of the French Riviera. It’s laid back, birth of the cool Miles, allowing the maestro’s trumpet to flourish and lead the way. Notwithstanding that, when Johnson and Patterson take centre stage, they transform it into a hotter piece, reminding us that whilst the publicity around this album will be all about Miles, the performance itself is one that is delivered by an entire band. There’s a really nice touch that you pick up in the YouTube clips accompanying this review. Whenever a band member solos, or does anything outstanding (which happens quite frequently), Davis holds up a massive card with their name on it, encouraging the audience to give it up for the artist. And they do.

Merci Miles! is a remarkable album and the only surprise is that it has been kept buried for thirty years. Amidst all of the wonderful moments and outstanding tunes, one stands out. Also taken from the Amandla album, Hannibal opens up this performance in utterly epic style. The first three and a half minutes are all about setting the scene. Miles is toying with us. Playtime over, Davis and Garrett get to work as they conduct their own personal duel in the centre of the stage. Like two gladiators in this magnificent arena, the interaction and dynamic between the two is breathtaking and when it hits the six-minute mark, it feels like the song has climaxed, as though it has nowhere else to elevate itself to. Just wait. Garrett takes over and propels it to the gods. Like a flamethrower, his alto’s scorching solo eviscerates everything in its path and, as you comprehend this jaw-dropping performance, you allow yourself to imagine what it must have been like to be present on that hot balmy night in France’s vineyard region on the banks of the Rhone.

I would give anything to be able to travel back in time and be present in that amphitheatre on the 1st July 1991. To hear the great Miles Davis and this wonderful band of musicians perform these songs would have been one of those moments in your life that you never forget. Sadly, it’s not possible. Thankfully, however, we can now get the opportunity to hear how it sounded. And it’s magnificent.