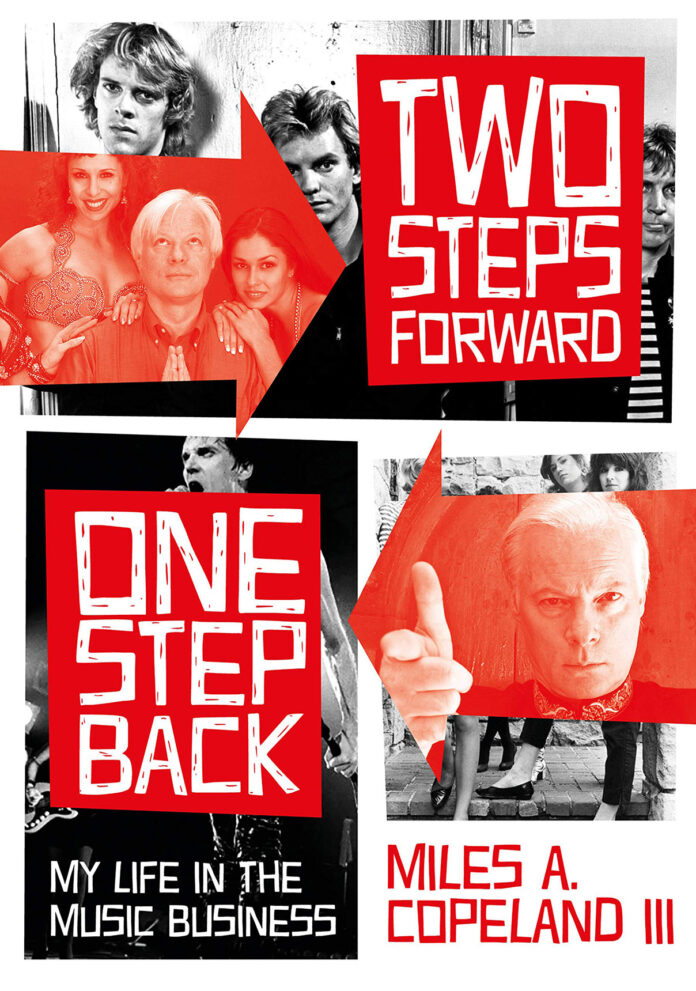 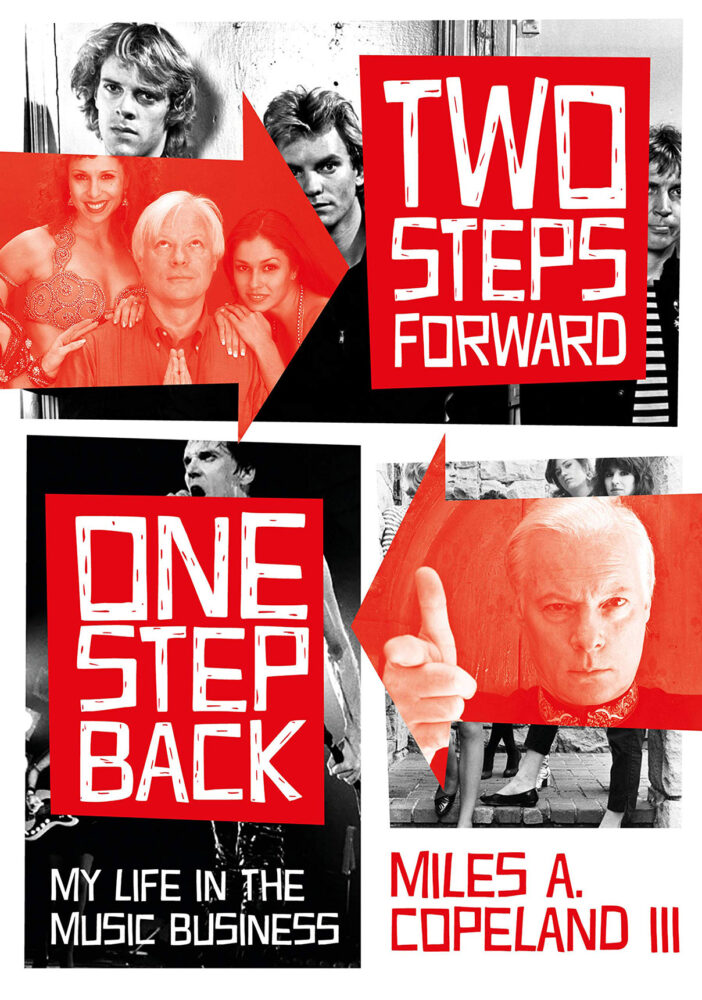 Two Steps Forward, One Step Back – My Life in the Music Business

Miles Copeland took advantage of Covid lockdown to write about his life and career in the music business. From his1950s CIA childhood in the Middle East to his involvement with many of the major players in the music business over the last 50 years, including The Police and Squeeze, it’s an intriguing tale of determination, resilience, bravado and luck.

Written during lockdown in 2020, this is a memoir that gives a real insight into the music business and its potential over the last fifty years. Jools Holland writes a rather tongue in cheek piece for the cover, praising Miles as only a good friend can, by comparing him to Shakespeare, Caligula and Solomon. One deceptively straightforward sentence jumped out at me. ‘It is an essential read for anyone considering a career in the music industry’.

Over the year that Miles Copeland wrote this book, so much has changed. The music industry has shifted in ways that could never have been predicted and the shake ups haven’t settled yet. It’s a time for maverick thinking, risk taking and fresh approaches. Very much the situation Miles Copeland found himself in back in the seventies, when everyone seemed to be making it up as they went along.

Miles Copeland’s father worked for the CIA and was a mover and shaker in many of the political manoeuvrings that still resonate in world events today. At university in Lebanon Miles took his first steps into concert promotion with Rupert’s People. He may have taken the occasional step backwards since, but he has never looked back. The title of this memoir reflects the unpredictable nature of success in the music business world, whether as a musician, manager, record company executive or promoter. Steps were also significant to Copeland because problems with his feet meant that he wasn’t drafted into the US army during the Vietnam war. Moving to London, where his parents were based in the late sixties, he and his brother Stewart were soon absorbed into the music scene of the time, Stewart as a drummer and Miles as a promoter/manager. Wishbone Ash were his first band. Finding his feet in the tail end of the Swinging Sixties, Copeland established a successful method of working with student union entertainment officers and the college circuit. The first major step back was when the StarTruckin touring festival in 1975 failed to deliver. An updated version of the sixties package tours, it had seemed like a good idea at the time. Losing money on that scale meant Copeland found himself sharing an office with Mark P, founder of the fanzine Sniffin Glue and in the same building as Malcolm McLaren. It was an opportunity to leave the past behind and to be associated with not only a punk approach to music business management, but also to market the music here and in the States as new wave. It gave him a credibility he could easily have lost.

Squeeze and The Police come into Copeland’s life at this time. Reading his version of events answered a few questions for me and filled in some of the gaps. Copeland takes a lot of credit. He doesn’t underestimate himself and we shouldn’t either when we see his connections and impact. Through his long career, with its steps backwards and forwards, it really does seem like truth is stranger than fiction. There is definitely an honesty in the way he presents his decisions and actions. He has a penchant for using acronyms, perhaps influenced by his CIA upbringing. His companies have included IRS Records and FBI (a booking agency). He introduces us to a music business accounting entry, SWATU. Standing for Something Will Always Turn Up, it could have been the title for this book, because it recognises the unpredictability of success in what is essentially a creative industry, however much it is managed by executives.

With his family background, it’s possible that he had an approach to life and business that was more calculating and manipulative than people normally admit to. The rumours around his association with the CIA must have given him a certain edge in the music business. Some of those rumours became reality when eventually he was called in by the Pentagon to advise on using music to gain ‘hearts and minds’ in the Middle East. At the same time, he doesn’t give away secrets. There are no sensationalist stories of bad behaviour from bands and he is very philosophical about those who fired him, including Sting in 2001. He quotes the phrase ‘No good deed goes unpunished’ in relation to that. He gives himself praise where praise is due, but he doesn’t blame anyone else when it goes wrong. Some of his successes were familiar to me, but I hadn’t appreciated that there were connections with Buzzcocks, the Fall and The English Beat. The Go-Gos, The Bangles, Squeeze and The Police are his best known associations and members of those bands have written their own versions of events.

The arrival of MTV coincided with opportunities for films, documentaries and branding via commercials. Copeland’s vision around these possibilities had a huge impact on the careers of Jools Holland and Sting which continues to the present day. Tracking down Hasil Adkins so a version of one of his songs by the Cramps could be used on a commercial has to be one of the most bizarre showbiz stories in print. Projects later in his career are equally fascinating. Recognising the market for music for belly dance classes, he promoted acts and musicians on the festival circuit with the Bellydance Superstars. His youthful Middle Eastern experiences helped him make connections. He has also promoted Rai music. His songwriting retreats in his château in France, Chateau Marouette, have attracted the best songwriters of more than one generation and created huge success for some of the participants. He is still working, and a documentary about the legacy of IRS Records, We Were Once Rebels, is planned for release this year.

From a personal viewpoint, there’s a real sense of ‘six degrees of separation’ with some of the stories in this book. It was good to see Albertos Y Los Trios Paranoias mentioned though I have to disagree that The Police stole their thunder as the opening act! But as Copeland quotes his father, elsewhere in the book, ‘Never let the truth get in the way of a good story’.

Two Steps Foward, Two Steps Back – can be purchased here

All words by Nicky Crewe. More writing by Nicky on Louder Than War can be found at her author’s archive.