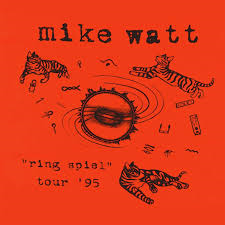 Solo live outing from ex-Minutemen and Firehose bassist extraordinaire, with a stellar backing band including 3/4 of the original line up of Foo Fighters, plus Pearl Jam’s Eddie Vedder. Ian Canty looks at how Watt was exactly flying the flannel in the mid-90s…….

By 1995 Mike Watt found himself in the unaccustomed situation of being a solo artist on a major label. Having battled his way through the US Alternative scene of the 80s and 90s in two of the best combos of that era in the Minutemen and Firehose, he released his first album for the Columbia label under his own name in “ball-hog or tugboat?”. After the record’s completion he took to the road with an ad hoc backing group featuring Pat Smear (ex-Germs), Dave Grohl and William Goldsmith – most of the Foo Fighters who were just beginning their rise to fame and who were in the strange position as it now may seem now of opening the show. In addition Edie Vedder from Pearl Jam was along for the ride. It is this unlikely but now legendary tour that is documented on disc here.

Though circumstance and time meant that by 1995 he had obviously moved on from both his previous bands, he patently still carried the feelings and emotions of those outfits on with him still and often played their material. The title of this LP and the tour itself was a clear marker to his past – the name references the Minutemen’s “Tour Spiel” EP (also featured on the “Project Mersh” mini-album) of ten years before. Though Watt obviously paid his dues in the US underground music scene, to me his style and writing have more in common with the classic New World outlaw song-smiths likes of Willie Nelson and Woody Guthrie than the more modern voice of say Jello Biafra. It easy given his bass and lyrical prowess to forget his voice, a dense mix of a gruffer Bruce Springsteen and a more lucid Tom Waits, which is perfect for the kind of dustbowl stomps, bitter recriminations and spirited noise that is “Ring Spiel Tour 95”.

This is a great sounding, full-throttle live recording. It is a massive cliché of course but Watt is one of the hardest working and most down to earth musicians you could ever wish to meet and that work ethic resulted in some fine gigs. Here it does sound as though a fine old time was had by all at the Metro in Chicago on the night documented here, thrilled by a band on red-hot form. Starting with a couple of covers of Daniel Johnson and Blackbird tunes (it is easy to see the Kinman brothers as kindred spirits to Watt, despite a more Jazz and Funk influence in Mike’s work as opposed to their update of Country-Rock), the power of this loose aggregation is clear enough. Of course there is plenty of material from the LP this tour was promoting, but he also touches base with his past on Minutemen classics “Political Song For Michael Jackson To Sing” and the part instrumental jam “Forever…One Reporter’s Opinion”, both from “Double Nickels To The Dime” and the later featuring two drummers as Grohl takes up the sticks.

Eddie Vedder turns up to scream through an early take of “Habit” and Joe Carducci of Saccharine Trust (who co-wrote track eight “Chinese Firedrill” with Watt) , Kira Roessler of Black Flag and Watt’s much missed bandmate D. Boon are all namechecked. Many songs rattle by with that trademark thumping, twangy bass, so ingrained with American culture that you can almost hear the dust and the heat, so much so that when the near-Mod tunefulness of “Piss-Bottle Man” arrives halfway through the set (dedicated to Mike Watt’s dad) the burst of pure Pop is at first a jolt to the system and after that, simply joyous. Which is not to demean the other material, intense and real reflections on the grimy side of the American dream which keeps the listener enraptured throughout.

Finishing with the bass only as accompaniment on “Powerful Hankerin'” (which was a track on the DOS album “Justamente Tres”), this collection stands as a moment in time not to be repeated as the Foo Fighters and Pearl Jam soon went onto stadium-sized stardom. Watt’s career path proved more low-key. He was to move on though to famously playing bass with the reformed Stooges and many other projects both solo and in tandem with others besides, but this period in time was special, very much a one-off and perfectly captured here.