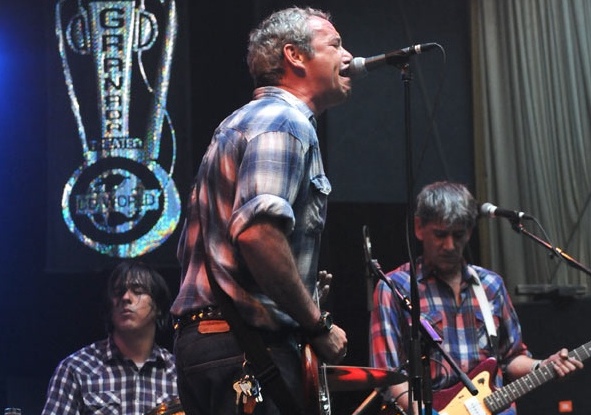 During the interview we recently conducted with Mike Watt we got sidetracked an awful lot. Mostly we were trying to talk about his upcoming projects, but invariably we ended up talking about the 80s and the Minutemen. Rather than include those sidetracks in the original piece (which ended up at 3,500 words anyway) I’ve broken them into little tidbits from Bother Mike which you can find below. There’s stuff on Minutemen, The Jam, The Pop Group, touring, flyers, downloads and Louder Than War!

“Bristol has a big importance to the Minutemen. Without The Pop Group I don’t know what The Minutemen would have sounded like. Like Blue Oyster Cult or Creedance. There was a band in London too, Wire, who had that Pink Flag album. Those two bands … I know it’s called a US punk thing, but the reality is, we were very influenced by these two bands from England. That we never saw even … we just heard on records.”

Mike Watt on The Pop Group, Wire, The Jam and UK punk:

Late 70s – the gigs we saw were Hollywood punk bands; Dils, Germs, X and The Bags, Alley Cats, stuff like that. But what we heard on records was The Fall, Blurt, Alternative TV, Lemon Kittens, really interesting, wild wild stuff. In England, punk got big with Jam, Clash but it was really only the first few bands we liked, in England they just turned into regular rock bands who got really big really fast. These other bands (Wire and Pop Group) were making music that we were kind of inspired by and interested in, we didn’t want to copy or anything but we thought “if they can do that then we shouldn’t be afraid to try this wild stuff. They made it ok to go crazy (laughs). These other cats, it seemed like it was econo, y’know, it was coming out of garages, just taking chances and we related to it. They gave us permission to try to find what we were about. The Pop Group said “let’s take Funkadelic and put it with Beefheart. Why not? Wire says “lets have a 35 second song and there’s no chorus” … ok! You just do what you do.

Mike Watt on The Fall:

Mark Smith, yeah, y’know, Dragnet, incredible album. It’s hard to believe but before there was arena rock in the 70s  and no one even wrote their own songs, the culture was really weird. (Music) wasn’t used as expression, we didn’t know about that yet, it took a lot of cats over here (England) and some trippy people we met in Hollywood (to change things).

My pop was a sailor – you go to sea, there’s a reason … it’s the same (for me) – you go out to play, there’s a reason … actually there’s a lot of opportunity when touring, you get to learn about a load of places. They call them vacations – people spend money to do this shit, so you’re never going to hear me bellyache about it. This is my 67th tour over 34 years.

Mike Watt on why he’s always so busy:

“I love doing them (proj’s) and making them unique, y’know, there’s no point doing re-runs of the same shit cuz you don’t learn anything. In my middle years I’ve come to understand or believe that everyone has something to teach me – I’ve just got to put myself out there.

Mike Watt on gigs and flyers:

I mean, I’m into gigs and I always will be, they’ll always be the main thing … you can divide the world into two things, there are gigs and there are flyers and everything that aint a gig, that’s a flyer to get people to the gig. Albums were fucking flyers – we thought they were totally disposable.

Yeah, but, y’know if we didn’t make those recordings I couldn’t hear D. Boon play anymore and y’know, I’m gunna leave some day soon and rather than a grave or a tombstone I’d rather have a record. So for that it’s kind of neat, and they can also be like diary entries…

I don’t have any problems with downloads at all, that’s just the way it is. The record company did it to themselves, I’m not feeling bad for them. You look at the history of music it was only for that little blip, a hundred years, that they got to sell it, it was always performed before that.

Mike Watt on arena rock in the 70s:

All punk from the 70s was a lot of reaction to arena rock, I was 13 in 1970 so my whole life was spent as a teenager, no clubs took punk and you just couldn’t talk to people, you couldn’t even see that the strings on the bass were a different size. In a club you could take chances, y’know, experiment and throw things.

Mike Watt on playing with The Stooges:

Ig has helped me become much better on bass. He has an incredible work ethic. He reminds me of D. Boon in some ways, believe it or not. Stooges have an incredible legacy and they deserve my best playing. I don’t think we’d have a punk scene if it wasn’t for The Stooges.

Mike Watt on recording the Minutemen’s magnus opus, Double Nickels on the Dime:

It cost $1100. Me and D. Boon were working in a hamburger place for $1.65 an hour. We did the whole thing in one night, 45 songs. The Hüskers came to town and said they’d done a double album so we said we’d do one to – take that Hüskers! That’s how we inspired each other. Punk rock was never a style of music … it was a fever you got, if you wanted to find your own voice, get together with your buddy, play with some other bands … it was never about anything orthodox, homogenised, or military in a way – everyone was wearing the same clothes … it was a reaction against that.

Mike Watt on calling the Minutemen a punk band:

I have no problems using that word punk to describe us. Now maybe I use it differently to how other guys do cuz they think it was a haircut or style. I’m not saying I invented it … actually I see traces of it going way back to Dada and Woody Guthrie and all kinds of stuff, it’s about people making their own world. I’ve had marketing people tell me you gotta watch out using that word – i said you watch out … you let them think what them want.

Mike Watt on meeting Black Flag for the first time:

Black Flag were putting out flyers in Santa Monica and they couldn’t believe there was a Pedro punk band and we couldn’t believe they were trying to put a show on on Pedro and they said why don’t you open up for us? And then we became SST 02. That’s how small the scene was!

Mike Watt on Kira Roessler, Black Flag bass player who also wrote or co-wrote songs for the Minutemen’s final album, 3-Way Tie (For Last) and is the other half of Dos:

K’s a huge hero with the riot girrrls as she was the only lady in the hardcore scene.

30 years after New Alliance (me and D Boons label) I made a label called Clenched Wrench. First release was Hyphenated Man, second release was Dos (this band I’ve had for 29 years with this lady called K, two basses) and the third was Spielgusher; me and Yuko Araki (drums) – Hirotaka “shimmy” Shimizu (guitar) we put together this music for these poems that Richard Meltzer made, 10 of them were the ones he brought to us as Minutemen (and which would have made the next Minutemen album if it hadn’t been for the car crash that killed him.)

Mike Watt on “The Politics of Bass”:

Politics of bass that I’ve learned is that you look good making the other guys look good, so even though it’s my band and my songs I’m still pushing my guys. I’m the grout in between the tiles. Y’know, D Boons mum, I can’t thank her enough for putting me on bass, it’s an interesting place, specially as composer, coz you have to leave a lot of room for your guys to express themselves. There’s one or two bits Tom improvises, but most of it comes from me. Raoul comes from hardcore, but he’s one of the softest hitting hardcore guys I’ve met.

George Hurley was a muscular drummer, a lot about the hi-hat and the little splash cymbals. Georgie man, 14 years I got to play with him. It’s sad, well, it’s not sad, but he got out of it …Late period George Hurley, that’s not just jamming, he used his composing skills which are singular, Georgie hears different to other drummers, George plays different to other drummers, he’s fucking great. But y’know, he’s now raising a family and he kind of fell out of playing …

Mike Watt on his father and having children:

…I know from my father being a sailor .. i never knew the guy, he was always at sea, so that’s why I never had children. In a way my life feels like a sailors…

Mike Watt about Fanzines (then) and Websites (now):

Back then fanzines were great, but it’s the same now with social media, it’s people sharing stuff with no middleman. The Flipsides … and the Slashs … that’s how you knew about other scenes without waiting for the rock critic god from Rolling Stone to come down and say “this is good.” Websites are the same fucking thing – they can be personal, passionate and shit. People used to think it was a purer time, but it many ways it’s the same now. It’s the fabric that bound our fucking scene together.

Scritti Pollitti were this band who turned into a disco band, but their first records were great, intense, really bizarre; the guy listed on the record how much he paid for the labels, the cover, the mastering etc no one did that! I thought it was very empowering, inclusive. Like someone said “it’s like a big wagon, you got an idea, get on”.

That band (Crass) was intense, it was an English kind of music, it sounded really rock and roll, but they were trippy … and the other band were Chumbawamba. He (I think it was Boff) turned me onto English rebel songs from the 15th and 16th century, this old tradition, and i think Crass are a bit like that. It’s that rebellion thing.

When it comes to music, it’s a way for humans to connect without anyone being on top or on bottom. If you don’t like it you turn it off, if you do, you buy another record, same with writing, art, poetry, they’re all ways to connect … Music can be a fucking happening, happening thing.

And saving the best for last…

Mike Watt on Louder Than War:

Keep up to date on all things Mike Watt via his hoot page: hootpage.com. Mike’s on Facebook as well and he tweets as @wattfrompedro.