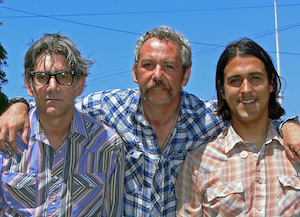 Mike Watt and the Missingmen

Mike Watt, he of fIREHOSE, The Minutemen and the current incumbent on bass with The Stooges, is out on tour just now promoting new (ish) album Hyphenated Man. Joe Whyte catches the Glasgow show.

One of the best thing for me about going to see bands, and has been since I started age 13, is the anticipation just before the band take the stage. Doesn’t matter if it’s a huge, cavernous venue (although I rarely go to those), a festival or a sweaty noise tunnel like tonight’s. Just those few moments when the crowd are tense with excitement, the amps are switched on and the hum of electricity takes hold of the air, are often worth the price of admission alone.

Given that tonight’s venue, Broadcast, is a tiny basement with a stage about six inches high, the crowd are at a distance from the band that would constitute an invasion of personal space elsewhere and that it’s Mike Watt and chums, it’s hard to feel anything other than the pulse quickening as the band casually stroll on. I doubt those at the back would have seen much, but the ceiling is all peeling gaffa tape, loose chipboard and torn up pipe insulation and it’s hovering just above the band members heads – it’s unlikely that Broadcast’s owners will be able to do much for the short of stature as regards visibility. No matter.

We’re here for Watt’s current (well, 2010) release which they play in its fifty minute entirety. Hyphenated-Man is something of a concept album. Watt describes as his “third part of a punk rock opera” and it’s (apparently) a treatise on his own health scares, his time in The Missingmen and a musical scattering of the paintings of Hieronymous Bosch. Not your typical punk rock album, then.

Watt and cohorts are a tightly drilled machine; the constant tempo changes and swerving turns of the music baffle at times, but it’s never anything other than intriguing. He plays his bass like Jaco Pastorious; dipping runs and jazzy fills amidst the sheer thunder and volume. Guitarist Tom Watson fills the songs with trebly scree and shrapnel-sized power chords. Drummer Raul Morales, sitting stage front, is a blur of sticks and hair as he leads the cyclical grooving charge.

Watt interacts easily with the audience who are engrossed and the band seem to have a telepathic understanding as each two minute-or-so song slides into the next.

There’s a little of The Pop Group in Arrow-Pierced-Egg Man (all the song titles are hyphenated, obviously) and Belly-Stuffed-Man recalls Watt’s first band. It’s punk rock, sure, but filtered through a lens of free jazz, acid funk, Captain Beefheart and fucked-up performance art.

I hear someone describe the set as “if Frank Zappa wasn’t shit…” which is a fair summation, but Watt and his men are more than that. Returning after the too-soon-done first set for a run-through of some old favourites, Watt rolls back the years with a blistering set of classics: The Pop Group’s Amnesty Report seemed just right for the beatnik-jazz themed funk that preceded it and proving that he still “Jams Econo” whilst The Politics Of Time screams the set to a fitting end.