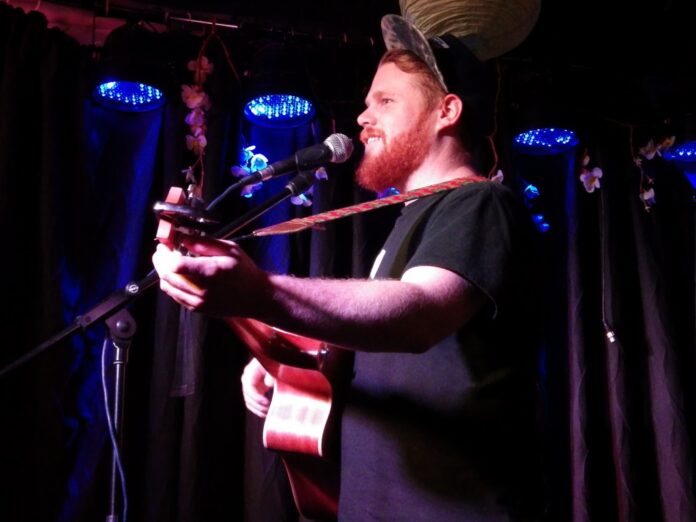 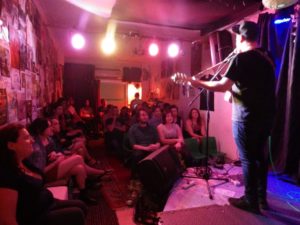 He makes his UK live debut next month but Louder Than War were there in Sydney to catch Mike Waters’ intimate Sydney show.

Sydney is going through a renaissance in live venues. After years of continual closure due to the twin evils of poker machines, they make a lot more money for pubs than musicians do, and property developers, they make too much money full stop, new venues are popping up all over the harbour city.

There is a big difference to the beer barns of twenty years ago, many of these venues are BYO (bring both your own food and drink), and are in some of the most unlikely of spots. Warehouses are ideal, big spaces, easy to throw up some artwork on the large walls, and no neighbours to complain about noise. Camelot in Marrickville was one of the first, although its popularity caused problems with the council and fire regulations, required a move to new premises. On the north side, the Acoustic Picnic regularly has great acts at night, performing inside what is a piano factory by day.

Tonight it is the Newsagency. It is what is says, an old newsagents which has been transformed into a venue by adding a small PA, stage and clearing out most of the old magazines. Slightly bigger than my front room, the audience sit on cushioned milk crates or school chairs. A maximum of forty people make any gig an intimate affair. BYO meant the music was accompanied by a slightly chilled Clare Valley Riesling and a fresh pizza from the shop next door. It does not get much better than this.

The night was part of a national tour for Mike Waters new single ‘Feel like Home’, a fitting venue for the song. Ditching ten years in the corporate world to bring his music to the masses, Waters does have a knack for writing a good tune. His first single ‘Gambling Man’ has become a hit on German alternative radio, as well as London’s XFM. Even Perez Hilton tweeted how much she liked the song. Any publicity is good publicity, right?

The audience was particularly well behaved, there was nowhere to hide for hecklers or talkers, and you could hear a pin drop during the performance. Waters made the most of the attention, performing a rapid-fire set of his originals, and dropping in a beautifully played cover version of ‘Youth’, by Daughter, before he finished up with ‘Gambling Man’. One of those songs that tends to stick in your head, whether you want it to or not. Luckily for Waters it is a good tune.

With space at a premium in the small venue, after the final applause had died down, and with nowhere else to go, he came and sat down with the audience. You can’t do that at the Metro.

An original, and very snug venue (you can just about swing a cat, although you would probably hit the performer) which is a must for Sydney music goers, but book your tickets well in advance. And Mike Waters? The venue was made for him and his music; his well-crafted songs filled the tiny room and provided great entertainment. With just a guitar and his voice, it will be interesting to see how he brings his music to larger rooms.

All words by Simon Proudman. You can read more from Simon on Louder Than War here.