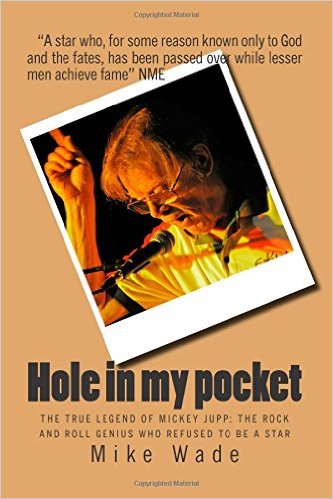 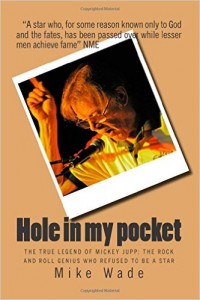 Biography on the legendary Southend musician Mickey Jupp that manages to treat its subject with great respect without becoming an hagiography. Louder Than War’s Craig Chaligne reviews

Mickey Jupp, probably one of the UK’s best rock’n’roll singer and composer finally gets an overdue biography with this excellent tome by journalist and musician Mike Wade. Best known for his short spell at Stiff records in the second part of the seventies with his landmark LP “Juppanese” and his participation in Stiff’s 1978 “Be Stiffs Tour” that saw an eclectic batch of artists (Mickey, Jona Lewie, Rachel Sweet, Wreckless Eric and Lene Lovich) criss cross the uk by train all the way up to Wick in Scotland (not many acts play there nowadays…), Jupp had produced a formidable body of songs, some of which were compiled recently by Repertoire on a compilation entitled “Kiss Me Quick, Squeeze Me Slow“.

Wade charts Jupp’s story from his childhood in Southend all the way up to his 70th birthday celebrations that happened in his (now) home town of Boot in Cumbria in 2014. Far from being an hagiography, the book is a “warts and all” portrait that doesn’t shy away from the rather temperamental nature of its subject. Jupp comes out as man determined to do things his own way. A reluctance to play the games of the music industry cost him several big breaks that some of his less scrupulous colleagues would have probably seized at the first opportunity. A constant in the book is Mickey’s love of songwriting and words. He never seems more happy when he’s creating his tunes in his little studio in Cumbria, all that comes after that (the recording process, touring) he’s slightly less enamoured off. Mike Wade moved with his family to Southend in the sixties. He was a session drummer and singer for several years and saw several of Mickey’s performances with legendary “Sarfend” combo The Orioles. Wade’s insider account of the Southend scene coupled with numerous interviews of its main actors (notably Mo Witham, John Bobin and Bob Clouter, all ex-Orioles) enable you to get a real feel for what was happening musically in this town at the time.

The book puts Jupp’s story in the bigger picture as it also gives us accounts of what was happening musically and sometimes socially in England at the time. I must admit I had my doubts about such a process at the start but Wade gives just the right amount of extra info on the general context of the time without overshadowing the story of his main subject. Chapters also contain in depth commentary about Mickey Jupp’s albums and far from being a torrent of praise, they come out sometimes quite scathing in their criticism (the “Long Distance Romancer” produced by Godley and Creme takes quite a battering), criticism that is usually comforted by Jupp’s own harsh comments on some of his records. Of particular interest to Jupp Fans will be the less documentated episode when Jupp had temporarily retired from live performances in the mid-eighties to concentrate on writing songs for other people (including a failed attempt at co-writing with Ry Cooder).

Mickey Jupp can be found on Facebook and there is an excellent Mickey Jupp Facebook fan page too. The book can be purchased directly from Mike Wade at the following email address : juppbook@gmail.com or through Amazon. I would recommend going through Mike as a bigger share of the profit goes to Mickey that way.