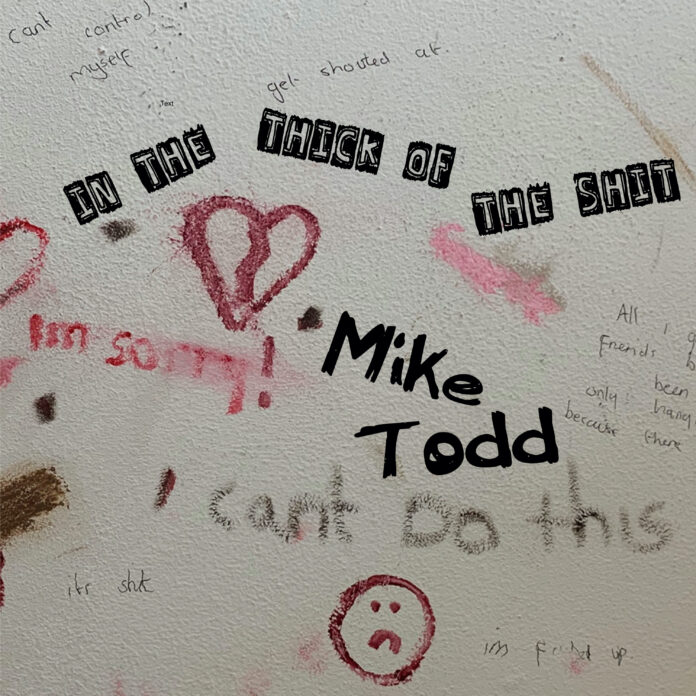 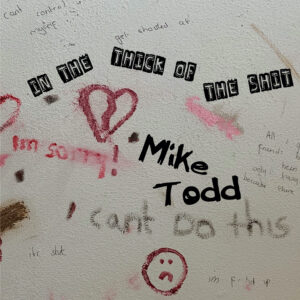 In The Thick Of The Shit

Suburban troubadour from the deep South (of England) with urban campfire songs of positivity & experience.  It’s all a bit folk’n’ country thinks Ged Babey initially until he gets to the line which quotes Springsteen  “I learned more from a three minute record, than I ever learned at school…” and declares Mike Todd a man to be taken seriously.

I imagine that every town and city suburb, all over the UK has a ‘Mike Todd’ kind of character….

Young at heart older dude. Long hair, tied back. Plays guitar. Football coach for local kids. Do anything for his friends. Lover of Dylan and the Clash. Part old-hippy, part-semi-retired punk. Left-leaning. Soppy old romantic at heart. Can’t remember the 80’s at all – a blur of addiction. Hasn’t had a drink for 20 years now and retains a lust for life and music… probably the nicest bloke in his-part-of-town.

No?  Then maybe Shirley (Southampton ‘burb) is lucky then and they’ve got the one and only Mike Todd.

Previously a drummer, he formed his first band as frontman (Eat The Document) at the age of forty, with kids less than half his age.  He ran a cafe/music venue in Shirley High St  (Cafe Reflections) for a couple years -which hosted some amazing memorable gigs.  I’d lost track of what he’s up to lately until this new EP/LP dropped on my doormat.

In The Thick of the Shit in itself is a typical Toddy title. A mixed metaphor but you know what he means. In the thick of the shit there’s a flower coming thru… Which sums up his irrepressible positive attitude.  Times are hard but ‘count your blessings not your money’ … all you need is love and family...  It’s homespun wisdom and tales of experience of life’s ups and downs.

Bob Dylan and the Clash are his heroes and influences, but Woody Guthrie and Johnny Cash and a country and western campfire singalong vibe seems to be what this mini album/maxi EP is about.

Mike’s Hamp-shurr accent and voice make him sound a bit like John Otway which tends to mean his less-serious songs with a bit of swearing and comic-verse go down well live, but he’s going for a more serious feel with this collection of songs.

The titles kind of tell you what to expect: You’ve Got Something To Say.  The Man I Was Before.  Golden Years ( no, not the Bowie song!). If You Aint Got The Money.  It’s Not Right.  What Goes Around.   Songs of freedom, songs of regret, song of unity and songs of protest, resignation and a belief in natural justice.

The title track sets out what is to follow, but personally, it is only when it gets to the final song. ‘Leave Me Alone’ when Mike comes into his own. I know he’s a fan of Patrik Fitzgerald so, the fact this song has a rhyme-scheme and dynamic which is a bit Patrik is probably why I like it so much.

I asked if he had a video on YouTube of the song and he didn’t, but he made one especially. For a first-time attempt, ‘I used an app’, it’s actually not bad.  It’s bloody terrible!

If it wins any awards, it will be for the worst, low-budget, out-of-sync, grown-men arsing-about, video EVER!  But, it showcases the song, which is utterly brilliant and shows Mike and friends as they are: unpretentious, camera-shy, fun-loving music-lovers and makers.

So here it is, Mikes own F-bomb laden, Subterranean Homesick plea for peace and solitude…

I’m just a little crazy, unpredictable and wild, I’m an over-active lazy sod who will always be a child, you won’t amount to anything, you aint got a hope..  You know that I won’t read your books and follow down your path / I’m an uneducated smart-arse who just wants a larf…

I particularly like the miming drummer, when there’s no actual drums on the recording and the accidental miss-spelling of school! The end shot of Mike with his covid mask over his gonads is a classic too.

I am not a fan of acoustic hillbilly folk’n’country musics as a rule, but I make an exception when I know the person behind it is a diamond-geezer and his intentions are to bare his soul, entertain and be part of a community of musicians with something to say and to kick against the pricks who impoverish our lives.

When the immediate future of live-music looks like being small-socially-distanced local gatherings for local people, it’s artists like Mike Todd who will be a valuable and viable choice.

The album is worth the investment if only for the opening song with its emotional ‘There’s good people going to work and not coming home... and the closing song which manages to cram in more words per minute than is strictly necessary and includes that great line …  There is a Bruce Springsteen quote which stands way above them all which says, “I learned more from a three minute record, than I ever learned at school…”

There is only one Mike Todd….  he’s a one-off. And this is the best album he and his mates Jonny ‘O’ and Ian Conford have made this year!

*The use of the phrase ‘take it up the arse’ in the song featured in the video, I am aware could be misconstrued as homophobic. Knowing Mike I am 100% certain that it is not intended that way at all, and should not be taken as such. It is merely part of a stream of consciousness, using everyday clichés, speech and colloquialisms about how the underdog is treated in society. If I had any doubt whatsoever about this the review would not have been published. (GB)