Home News Mike Peters from The Alarm gets an MBE 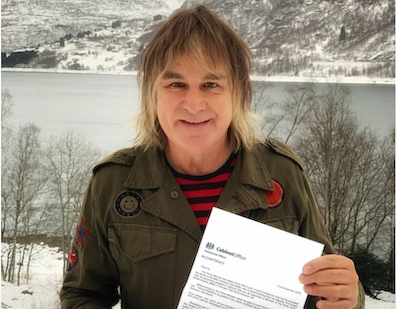 Not that we believe in these kinds of things (it should be called a Citizens medal – and ever winner should have merit like Mike has)  but it’s great to see Mike Peters get an MBE for dedicating his life to giving hope for families affected by cancer through his Love, Hope Strength Foundation.

“I am completely overwhelmed and just so grateful to have been included on the New Year’s honours list,” said the three-time cancer survivor. MBE must stand for a multitude of brilliant efforts, because that’s what lies behind everything that I’ve achieved. Not my own efforts, but other people’s. I found out the night after we had played London,” he said. “I was in the tour bus when I got a phone call from my wife Jules’ parents who had been to collect some mail from our house. There was a letter from the cabinet office amongst it all, so I asked them to open it just in case I was in trouble,” he laughed. The letter said I had been given the opportunity to receive an MBE. I had no idea. It was totally out of the blue. I was not expecting anything like this. It was right on the deadline to send a reply, so it was a bit frantic getting everything together, especially as I was on tour,” he added. “So Jules’ dad had to take photographs of the letters and send them in and I could fill them in digitally on a laptop and get them into the Cabinet Office. Luckily I was able to turn it around quickly and I was able to confirm my acceptance. I have to be honest at first I didn’t quite realise the urgency of it all. I thought it was for next December. I was very touched, because it’s not bestowed by the monarchy, it’s approved by them but its from all the people who have put my name forward for this,” he said. “I feel very humbled. When you receive something like this it makes me think of my mum and my dad who are not here anymore. It makes me think of Jules’ parents, and The Alarm fans and all the people who have been in hospital with me, who aren’t here anymore.