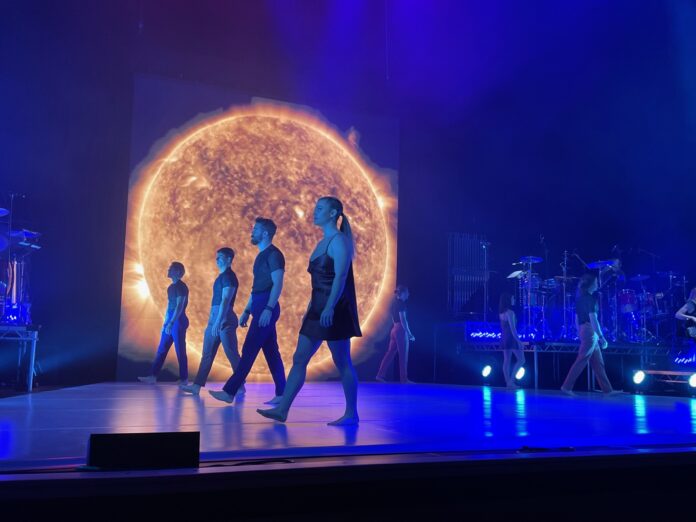 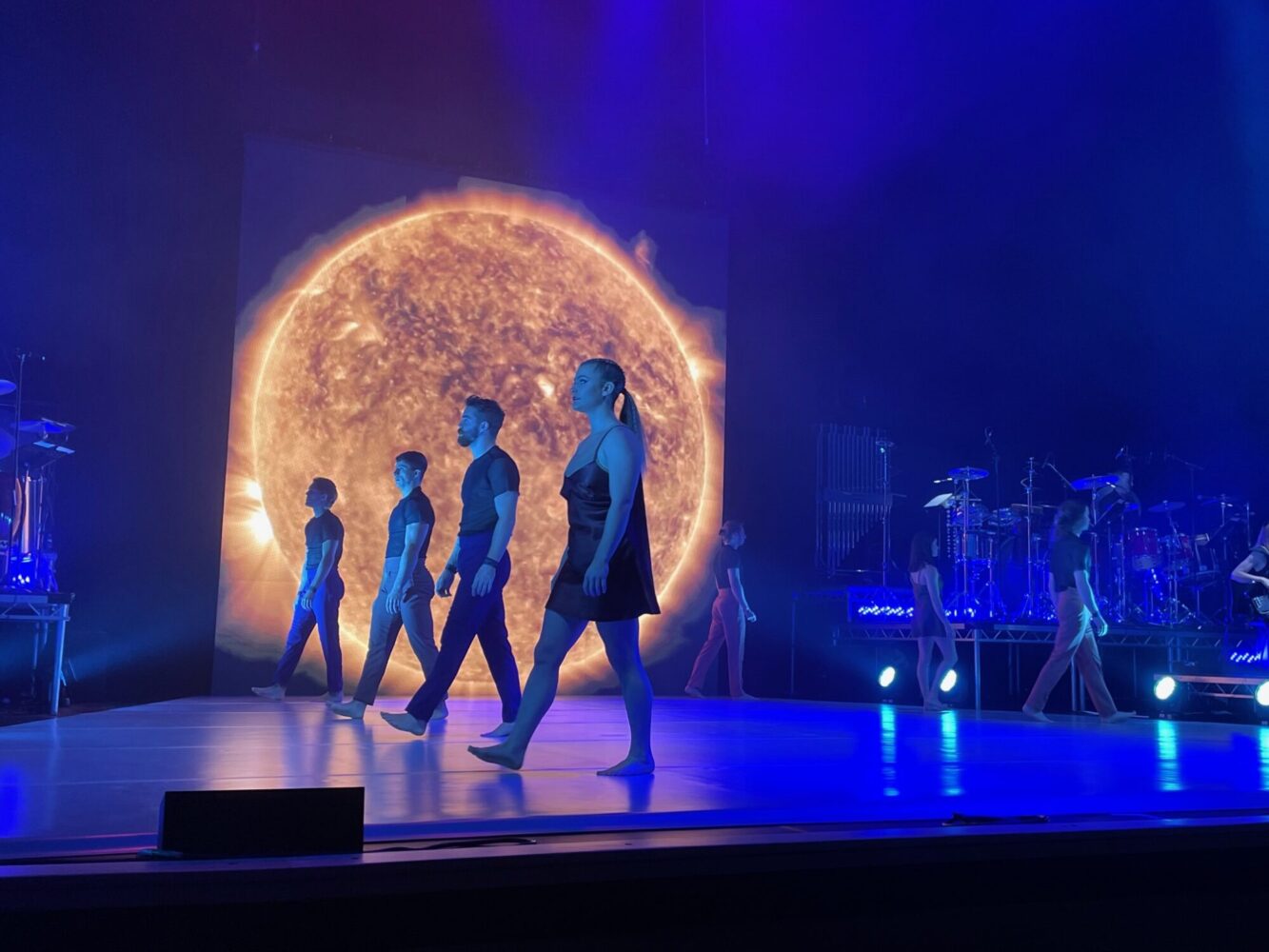 As a long-time music fan, I have witnessed a few live events in my time. Even since lockdown ended, I have seen around twenty live bands, so I’m hardly a newbie when it comes to watching live music. It has come in a variety of forms too, from the troubadour wit of John Bramwell to the aural assault of Document. Looking back, I’ve seen most of the greats, Pink Floyd, The Rolling Stones, The Who and Genesis, so I was really looking forward to seeing Mike Oldfield at his 50th Anniversary concert at The Royal Festival Hall in London.

Who can forget the original broadcast version of Tubular Bells live on BBC in December 1973? An ensemble which included Gong’s Steve Hillage and Pierre Moerlen, Soft Machine’s Mike Ratledge, Henry Cow’s Fred Frith, Rolling Stone, Mick Taylor and a smattering of other virtuoso performers, including of course Mike Oldfield himself and brother Terry on cello.

It was a fabulous show; faithful to the original and something that brought the seemingly impossible to life. With Mike playing all the instruments on the original album, it was a monumental feat. A triumph of its time, and a feather in the cap of the BBC for capturing and broadcasting the whole event live. The album was still riding high in the charts and Oldfield was the darling of the music press.

He would go on to have a string of hit follow ups; Hergest Ridge in ‘74, Ommadawn in ‘75 and various ‘Bells follow ups – II (his fifteenth solo album) in 1992 and III in 1998, none of which would match the unexpected inventiveness of the original.

Recorded at The Manor in Oxford, with the late, great Vivian Stanshall as acting MC, (introducing the instruments one by one in the climactic close to side one), the album was a triumph – melding progressive rock and classical music in an explosive genre mash up that was a hit with young teens and grown ups alike.

The 50th Anniversary show was much anticipated by me and my wife. We booked it back February, a full six months before the show was to take place at The Royal Festival Hall in London. It was not cheap, but bearing in mind that none of these performers are getting any younger we booked it anyway, as it may have been the last chance we would get to see Mike Oldfield live.

We got to the Hall soon after 7.15 and the show started at 7.30 sharp. We were three rows from the front so had amazing seats.

The show started with what sounded like a long, drawn-out guitar driven dirge. We quickly scanned the programme to find that it had been written by Robin A Smith. Quite what it had to do with Mike Oldfield was unclear, except it had been written in the style of some of his later works. We wondered why the main man wasn’t playing and assumed that it was because he hadn’t written it and that he would come on to play ‘his stuff’.

As the night wore on and some of Oldfield’s later works were introduced into the set – Summit Day, composed by him in 1999 followed by Moonlight Shadow from 1983 – we began to realise that we were watching what can only be described as a Mike Oldfield tribute band – a fucking expensive tribute band at that, as we had paid more that £112 for the privilege of seeing them.

We desperately scoured the extensive programme (with multiple photos of Mike Oldfield and a timeline of his releases, as if to rub it in) to try and establish what was happening, only to find on page 10, buried in the section About This Performance Of Tubular Bells the line: “Mike really loved the idea and although he couldn’t be part of the actual performance, he has been encouraging me all the way” –  (Robin A Smith – Musical Director & Arranger).

There was nothing else, certainly not at the time of booking, and frankly we hadn’t been near any website. Why would we? We’d booked to see Mike Oldfield for £226.63 (including booking fee) and expected to see him. Nothing gave us the impression that we were going to see a covers band.

The first half finished with Moonlight Shadow. Remember the enchanting original with vocals by Maggie Reilly? Well, this was nothing like that. What we got was Lisa Featherston belting out a theatrical version – straining her vocal ability to the max – shouting into the mic, completely murdering the original. I found myself looking the other way, seething inside that I was witnessing such a travesty.

The band itself, frankly, wasn’t that bad – Jay Stapely, a competent guitarist from Tubular Bells Live, a Mike Oldfield tribute band (who say on their Facebook page that they are ‘not affiliated with the ‘official’ London shows’!) was good, but he was not a showman and more importantly, he was not the person I had come to see – the man who stood proudly atop a platform at the 2012 Olympics and reminded us just what a milestone the original Tubular Bells really was. His incredible guitar playing sent shivers down your spine. No, this wasn’t him, which is no disservice to Jay – he just wasn’t the man we’d come to see. 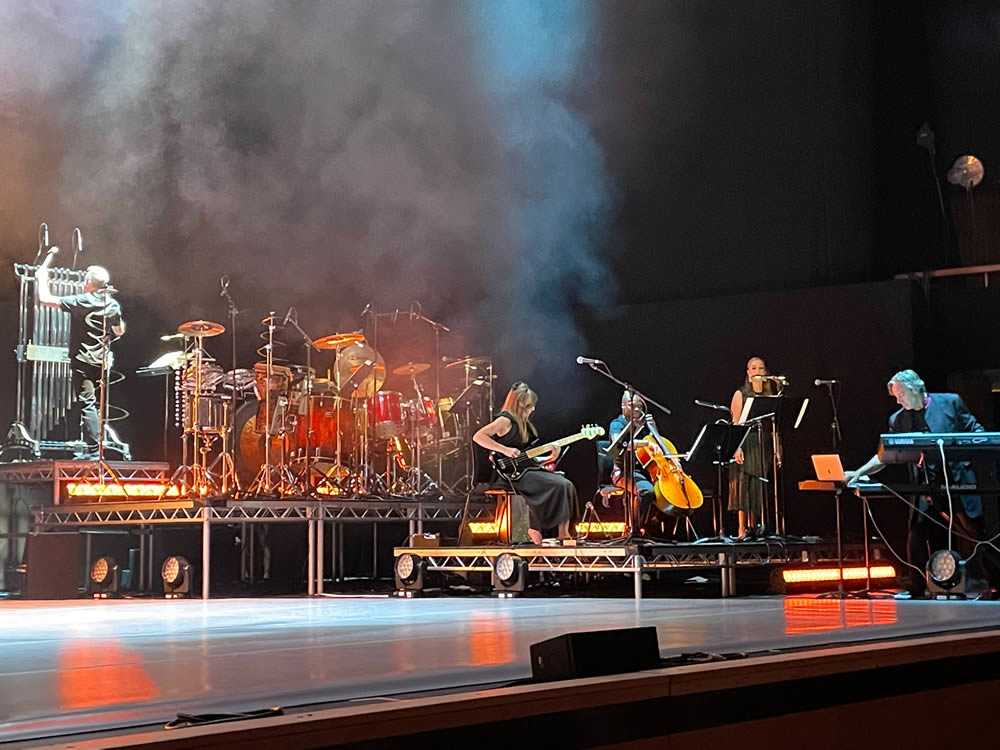 We broke for the interval and a chance to complain. ‘There’s no one here to complain to’ said the steward outside the door to the auditorium, despite the programme informing us that ‘We have a duty manager available at all times’) . ‘But take this email address and tell them how you feel’ she added. (more of that later).

When we came into the room there were some, what looked like, the local sixth form limbering up in the middle of the stage. Apparently we were in for dance show – as if Tubular Bells needed the extra visuals to enhance it.

The band cranked into action and the old familiar piano notes tinkled into our ears. Who can forget the shiver we experienced when hearing them for the first time? Later used in the opening sequence of The Exorcist, they have become almost as recognisable as the original Microsoft start up sequence (written by Eno no less) or the first Nokia ring tone – so iconic. Well, that’s where the magic evaporated.

I saw Cirque De Soleil’s Quidam in the early ‘90s – an enchanting show with world class acrobats and dancers. They thrilled with their aerobatic dance sequences; expertly climbing up ropes, dropping within an inch of the stage, all with incredible flair and grace – mystical and above all, totally convincing and absorbing.

What we got was a troupe of wobbly acrobats who jumped and pranced around the stage, shakily climbing on each other’s shoulders; first one on one, then two on one; the poor unfortunate one at the base shuddering under the weight, and in the words of my wife ‘they look scared to death, as if they are totally relieved that no one fell’. It was painful to watch and almost obliterated any chance of concentrating on the music which was playing behind them.

So focused was the show on the performance, the musicians were secondary. The two guitarists were hidden behind the piano, so that any interest we may have had in the Tubular Bells performance itself was obscured. It was dreadful. All the while, a single unimaginative burning sphere rotated on a filmed backdrop.

…and Mike Oldfield was not there…

When it came to the finale, the keyboard player (I think it was Robin A Smith himself), stage right kept throwing his arms towards the guitarists and pianist, as if to claim some kind of credit for the notes they were playing. He hadn’t conducted anyone else. He’d remained fairly static throughout the performance. But it was clear that, as it came to the close, he wanted to garner some reflected glory from Mike Oldfield (did I say he wasn’t there?) himself by jumping around in a kind of ownership ritual.

The show ended with the Sailor’s Hornpipe with some of the more easily entertained audience on their feet clapping along like deranged seals. I upped and left.

So I paid £226.63 including the booking fee to see a tribute band. Not only that but it was fucking dreadful. Not because the individual members of the band were particularly bad, but because Mike Oldfield didn’t turn up, and rather than anyone make it clear at the time of the booking, or during the six months that preceded the gig, they went ahead and produced the concert without him without telling me. Worse than that, what could have been an adequate but very expensive performance, was turned into an absolute joke by the terrible display of inelegant junior acrobatics on show.

I complained by email to the venue. The email didn’t work. I found an alternative email and this was the response:

“As your order was made via Ticketmaster you will have to pursue this matter with them. We do thank you for your feedback. This will be passed on to the producers of the show and will be kept in mind for any future shows where the composer is still living and may be expected to appear.”

Where the composer is still living!

I told them that their response was unacceptable and got the following:

“I am sorry for any confusion over the Tubular Bells event; however this was not our intention. Following feedback from the first few shows, the majority of people have enjoyed them. We are unable to offer a refund in this case, however we do thank you for your feedback. This has been passed on to the producers of the show and will be kept in mind for any future shows”.

The show should have been billed as “Robin A Smith’s Tubular Bells” – like “Roger Water’s – The Wall” – so you know exactly who is playing and you may not be getting the original – or better, in this case ‘Mike Noldfield’ – just like Noasis!

Words by Nigel Carr. More writing by Nigel on Louder Than War can be found in his Author’s archive. You can find Nigel on Twitter and Facebook Listen to Nigel’s show on Radio Alty – Wednesdays 9-11 pm