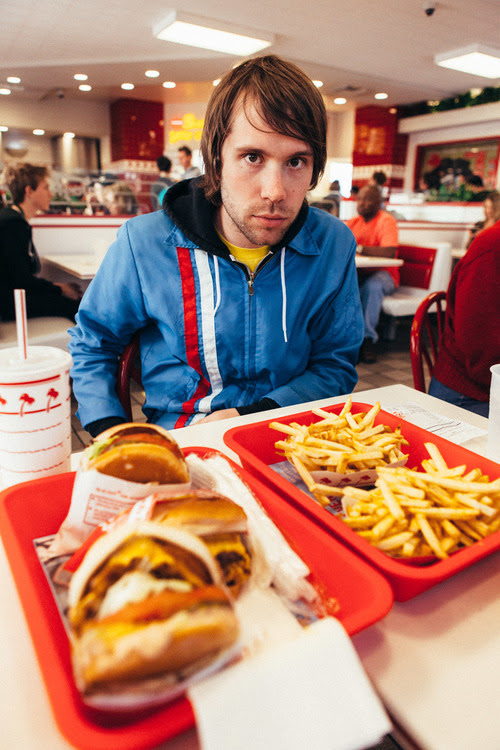 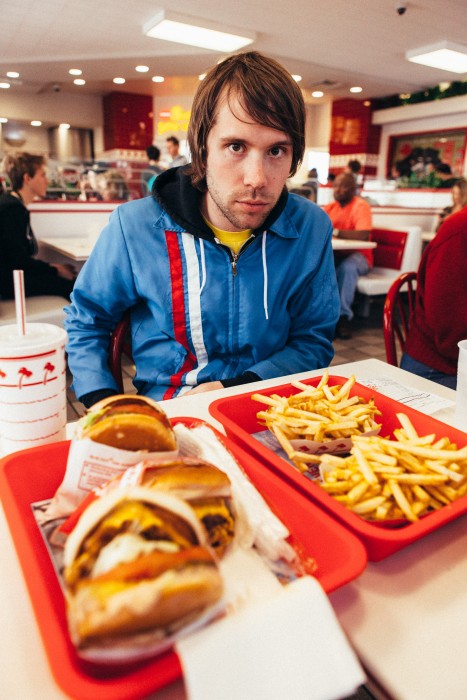 In anticipation of Mike Krol’s awesome Merge Records release, Turkey (Out on August 28th) Mike talks with LTW’s Lisa Sookraj about how he ended up in LA, his self-designed album cover and his thoughts on ‘garage rock,’ amongst other things.

Mike Krol follows up his highly underrated Trust Fund (2013) with his debut on Merge records, Turkey. This solid collection of sharp, fast songs delivers tight, fun power-pop from start to finish, as evidenced by one of its strongest tracks, the well-chosen first single “This is the News”.

Krol’s sound this time around is thicker (piano works in Krol’s favour) and fuzzier all while Krol continues to dig deep and bare his emotional soul in a sincere and sweet manner that makes you want to give him a hug. Intimacy is furthered by interjections from Krol and bandmates that make the listener feel like they’re in the studio with them. The album is upbeat and emotive, with a sticky, feely early Weezer touch meets the in-your-face energy of bands like the Hives. Krol may be going for a bit of a slacker image or at least one of informality, but the spot-on production and delivery give away the effort exerted here. It’s a late summer release primed to warm you into the coming cooler months. 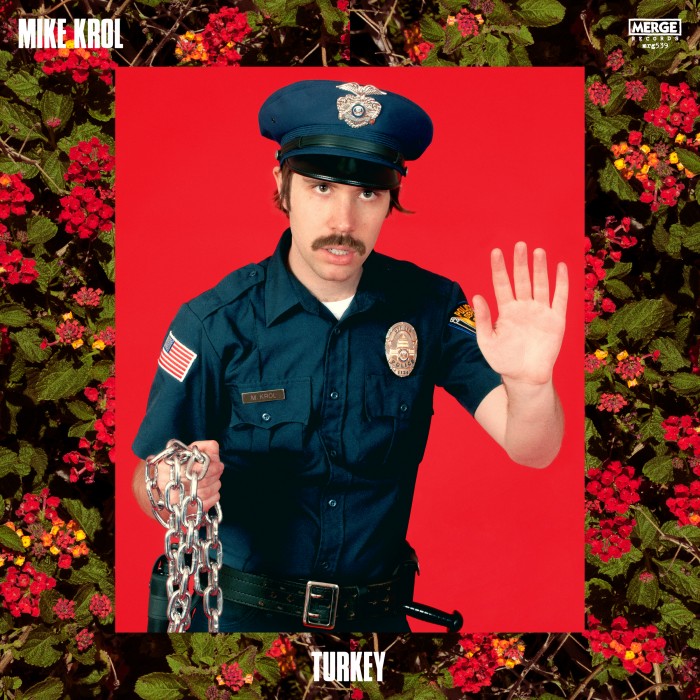 Which instrument did you start playing first (guitar, drums, piano)? Which has been most crucial to your songwriting?

I took piano lessons when I was very young, but it always felt more like a chore than something I wanted to do. My older brother Justin got a drum set when I was around 7 years old, and that was the moment I started to have an interest in music. I began messing around on it when he wasn’t using it, and that lead to joining the school band as a percussionist, and eventually taking lessons. Some time during my early high school years, I borrowed a cheap electric guitar from a friend and taught myself how to play bar chords and power chords. Never took a lesson or figured out how to play it better than that.

I will always consider myself a drummer more than a guitarist/singer/whatever. When I write songs I start with drum beats first and then build guitar parts around them. Even on guitar I think about rhythm and how a riff is spaced more than the actual notes.

My middle name is Frederick, but I go by Fred cause it sounds funnier. I only add “Fred” when the other Mike Krols of the world take my name on social media (i.e. my twitter and facebook)

“Left out” is about stereotypes and feeling disconnected from music scenes where one lives. Has this been your own experience?

Yeah, absolutely. That song (and all my songs) are super personal and based on feelings I’ve experienced. Living in LA and being interested in garage rock can be a frustrating affair. The scene is pretty much dominated by rich kids from Orange County who have never had to work a day in their life. Do drugs, skateboard to your friend’s house, record a crappy song with non-coherent lyrics on a cassette tape, close your eyes and draw a pot leaf on the cover, and then play a show at a venue so obscure that no one can even find it. And guess what? You’re now the hottest garage rock band in Los Angeles.

That situation is all too common, and  is pretty much everything I try to fight against. Maybe it’s because I’m from the Midwest, worked my ass off at several jobs to make rent and press records. I’ve lived in several cities before ending up in LA which helps to not take for granted how good we have it here. I have never felt included in the LA scene, and I’m totally fine with that.

What do you think about ‘garage rock’? How would you describe your sound in your own terms?

I have mixed feelings even about  the term “garage rock.” I feel like it gets thrown around way too often, and a lot of times when I hear bands that are labeled “garage rock” and I can’t turn it off fast enough. To me, garage rock is stripped down and simplified pop music using basic instrumentation and recorded in a bare-bones manner. I hope that my contribution to that world is proof enough that you can be a normal guy/girl and make music if you want to. I wouldn’t say that I set out to play garage rock, but more that I wanted to make music to express my feelings. And because I’m not a very good musician or recording engineer, the songs were simple and recorded poorly – therefore generally classified as garage rock. If I had to give a description of my sound, I normally say “American Lo-Fi Power Pop.”

You crush the emotion. How does it feel to be a guy with a heart on his sleeve? How has it been a pro and/or a con as a musician?

Thanks! That’s a fantastic compliment! I think having an outlet to express feelings and things that you don’t necessarily want to talk about is extremely important. Songwriting has always been something that I’ve used as a form of therapy. After I do it, I feel better. Because I do wear my heart on my sleeve so blatantly and my music is so personal to me, it’s a little nerve racking to think about how people will respond to it. Like, it’s hard not to take criticism or a negative review of my music as a serious attack on who I am as a person. But I don’t know how to write a song other than have it be a true, factual account of what I’m going through at that time. I’ve never been good at writing fiction.

If you were curating a music festival with artists living or deceased, who would you want to play alongside?

That’s a tough one. I guess I’d throw all my favorite bands together: Superchunk, Cheap Trick, Violent Femmes, Weezer, Descendents, Grandaddy, Elliott Smith, Quasi, Rocket from the Crypt, Guided By Voices, The Who, The Kinks, The Beatles, The Ramones, The Pixies, Buzzcocks, and Devo.

If Mike Krol was an alcoholic beverage what would it be and why?

Cider. Cause it’s sweet/sugary and not very popular.

What were some of the ‘wrong turns’ you’ve mentioned you took after moving to LA and how do you like living there?

I’ve wanted to live in LA since I was very little. Growing up in Wisconsin and dealing with snow and cold weather for 8 months of the year made me want to live in a place where I can see the sun all year round. But ultimately, it was a bad break-up in Connecticut that made me flee to the West Coast. The ‘wrong turns’ I took post-high school were moving to the East Coast, then back to the Midwest, then back to the East Coast. Working at jobs non-stop, and never really focusing on my own personal projects. I regret not taking the jump sooner into focusing on music full-time. I really have no complaints about LA at all. I’ve made some amazing friends and have had nothing but the best experiences of my life since I moved here. I definitely found my home.

Can you tell us a bit about the album cover for Turkey? Did you design it?

I did design it. I’ve been wanting to do something with cop imagery for years. No reason really, other than Terminator 2 was one of my favorite movies as a kid and I thought T-1000 looked awesome in the police uniform. But really I just wanted to do an homage to the era of music packaging I like (60’s/70’s) when bands posed on the cover in costumes and didn’t take themselves so seriously (Devo, Cheap Trick – Dream Police, Rolling Stones – Their Satanic Majesties Request, The Beatles – Sgt. Peppers). I like creating whole themes/concepts that I can carry throughout the whole package and with all the imagery around the tour, even if they don’t necessarily relate to the music at all. When it comes down to it though, I’m just trying to do the opposite of what everyone else is doing or what is expected. I can confidently say that I’m the only indie rock musician who is embracing cop imagery at this moment.

Do you have any pets? Or if you were going to get one, what would it be?

I don’t have any pets currently, but my family had a dog (shih-tzu) when I was growing up. It just passed away (18 years old) about a year and a half ago and the song “Less Than Together” on the album is about that. We had a difficult relationship: the dog and I. But my Dad loved the dog like crazy and when he passed away my Dad took it really hard. It kind of put a lot of things into perspective for me. But if I were to get a pet, it would be a dog. Probably something small and adorable like a pug.