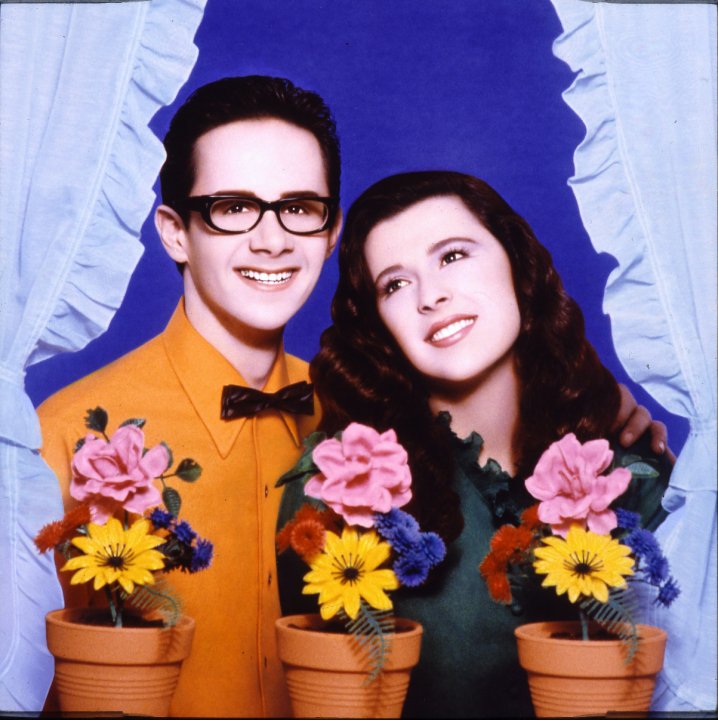 Before Air, before St Etienne, there was Mikado. Consisting of chanteuse Pascale Borel (previously with Pop outfit Lala et les Émotions) and synth boffin Gregori Czerkinsky, they emerged from France’s capital in 1982 with their first single Pas Hasard, issued on Les Disques du Crepuscule. It was an instant classic. This outfit were finely crafted and stylised, but also marked by a sly sense of humour. Capturing the imagination, they swiftly picked up a fanbase in their homeland and also Japan.

The attention to detail in their work betrayed their art leanings, with high kitsch photo sleeves by Pierre et Gilles housing their delicately concocted recordings. Pierre also worked with the band in their videos and short film presentations. There they just ooze Parisian cool, posed in artificial surroundings a bit like a New Wave Gilbert and George. Gazing through beautifully constructed flower heart bouquets, pale and happy but seemingly distracted, Mikado appeared a more human alternative to the “Man Machine”/Robot image.

In 1985 they issued their self-titled debut album which boasted a production credit for Yellow Magic Orchestra’s Harumi Hosono. After a fair amount of success with that LP, a follow up did not appear and after releasing a number of popular singles the band split in 1991, with both participants going onto solo careers.

Midako are a new name to me, but listening to this new compilation it appears that their fellow countrymen Air owe them a bit of a debt. Borel’s breathy delivery and the spartan electronic accompaniment mean that certain tracks could have come straight off of Moon Safari. For all their posing in artificial collaged landscapes, Midako were clearly something more than mere avant-garde Pop preening, displaying a warm and sometimes cheeky approach to minimalist electro and indeed their own public image. They seem to be sending themselves up in fine style, whilst pitching up with some very listenable and catchy material.

Par Hansard, which kicks off this compilation, is a lovely statement in restrained spell-binding – a perfect but hazy artificial world created in the space of four and a half minutes (it is also reprised in its English version Romance among the bonus tracks). Mikado occupy some sort of middle ground between Young Marble Giants and Depeche Mode, but that’s only half the story. There’s a hint of their approach being an update of Serge Gainsbourg’s partnerships with Brigitte Bardot and Jane Birkin and on occasion they veered towards more standard synthpop (like on In Naufrage en Hiver). Even then there’s a sense of the strange and a peculiar assertiveness in Mikado’s typically low-key pathway.

Always seemingly near-whispering at close quarters, Borel’s vocals act as the perfect compliment to Czerkinsky’s pared down proto-electronica. Like the aforementioned YMG they existed in their own world, with in their case Parisan late night drinking clubs replacing Cardiff’s coffee bar scene.

For the most part of the first disc Mikado stick to delicate, chilled electronica Pop. Ce Garcon-la has a beautiful sense of wonder in its plaintive voice and works well backed by minimal electronics, encapsulating what this duo did well. Though Trois Beaux Soldats is lengthy it doesn’t waste a second – military drumming and a delicious, confessional-style vocal, moving on to verge on Psychedelia (there’s a hint of Strawberry Fields Forever near the end). More in the synth pop mode both Attends ou vas-t’en and Les Enfants du Piree contain some nice vibes/glockenspiel work and the fast and buzzy Les Fleurs de L’ete features Mikado at their most upbeat.

However, things get stranger on the bonus tracks, where the “Pop” version of Mikado meet their more experimental edges head on. There are hints of Klaus Dinger’s excellent La Dusseldorf on La Fille du Soleil and Czerkinsky’s voice is employed well in duetting with Borel on it. Night Of The Hunter represents their most outré offering, a bit like the soundtrack to an imaginary David Lynch French New Wave flick. The CD ends with two English language versions, Mikado Game and Romance, showing the pair at least a match for the vast majority of 80s Pop, let alone most synth duos.

On Forever Mikado reveal hidden depths that one might not have considered amidst the perfect heart-breaking synth-pop they evidently were dab hands at. In addition to their obvious skill in seductive, a bit naughty electropop, the second disc here shows that they were a more well rounded and experimental proposition at times than one might have thought on first impressions. The English language versions appended to the second disc show that US and UK music fans missed a lot in not placing Mikado close to their hearts.