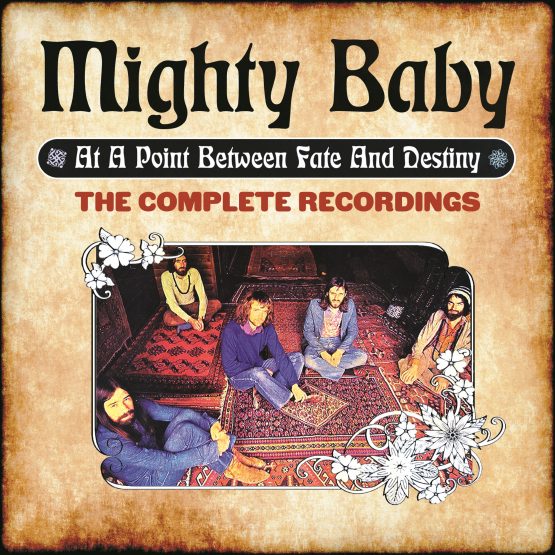 Mighty Baby – At A Point Between Fate And Destiny 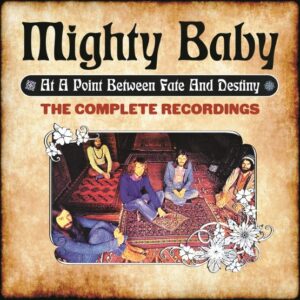 6CD boxset with the complete recordings of Mighty Baby, the psychedelic/prog band that emerged from the last days of mod heroes the Action……LTW’s Ian Canty swaps his parka for a kaftan (with an RAF roundel on it)….

The Action were a top draw when it came to live work in the mid-60s, with an unbeatable, energy-filled and truly soulful stage show that had young mods dancing the night away. But they found it difficult to bottle that lightening, even with the Beatles’ producer George Martin behind the studio desk. As the flop singles mounted up, fashions fluctuated and the furious r&b/soul that was their trademark fell out of favour with the hip young things. The mod scene was being gradually usurped by all things hippy. Added to that the Action had their internal troubles to deal with, whilst they tried to adjust their sound to the changing times.

Soon Reg King, the band leader and singer, found himself increasingly marginalised, the soul music that suited him down to the ground slowly drifting out of their live set. For the longer jams the band now employed he was limited to sadly bashing a tambourine. It was during this downtime Reg had away from the microphone that the incident occurred which led to King’s expulsion from the Action. He unwisely climbed an ornamental tree at a gig in Newquay during the extended jam of India (a John Coltrane tune – it still featured in the Mighty Baby live set in the 70s, as witnessed by the Live At Malvern disc on this set). This tree wasn’t built for such adventures, so Reg and the tree came crashing down, the bouncers chased the singer from the venue and the management withheld some the band’s fee as a result.

King was sacked after this disaster and for a while they continued as the Action, being signed to Blackhill Enterprises and recording five tracks which are included as extras on disc two of this set. Soon after they changed their name briefly to Azoth (apparently meaning either a make-believe solvent used in the alchemy or a cure all medicine). After one gig a switch back to the Action name was required for live work, but after signing to the Head record label boss John Curd (an ex-Action roadie) decided to repackage them under the Mighty Baby moniker, making their debut under the new name at Middle Earth very early in 1969.

The newly christened band got down to work hard on a new batch of songs in the studio, sessions which were supervised by DJ/Producer Guy Stevens (who produced Mott The Hoople and later the Clash). His methods didn’t bring results that made the band happy, but their self-titled debut album which emerged is still pretty good to these ears. Nicely presented in a mini-gatefold sleeve, Mighty Baby is the sound of classy late-period UK psychedelia crossing swords with progressive and country rock.

Egyptian Tomb, which kicks off the debut LP is a delightful piece, skittering, horn-led pop psych with the fresh feel of a cool breeze. The next track A Friend You Know But Never See is another sweeping psych wonder, but I’ve Been Down So Long dips nicely into country, signposting the sound of their next LP. There’s a neat chill to the guitar on Same Way From The Sun and I’m From The Country (the flipside to Egyptian Tomb on Mighty Baby’s first single) is a fine piece of freewheeling folk pop with a good dollop of country-fried guitar.

Closing number At A Point Between Fate And Destiny ends things on a slow and lovely note, the band construct a beaut of a musical landscape with some sweet harmony vocals. Overall this debut didn’t quite connect with the fans, but Mighty Baby couldn’t have done much more on what was an attractive package indeed.

This disc concludes with some early versions of the album songs and a couple that were recorded at the same time but not used. Of those that didn’t make the album Messages is riffy with a tight backing track at odds with the band’s looser approach at the time – perhaps it was a leftover from the Action days? Whatever the circumstances, it works well alongside Ancient Traveller, another that remained unreleased, as quality late in the day psychedelia.

The band’s second album A Jug Of Love found them much further into the country rock influence that featured in part on their debut. Martin Stone’s hand in this was extensive and his honky tonk soloing is present for a large part of the running time. It is something he would further explore with his pub rock band Chilli Willi And The Red Hot Peppers. At times they display a cool pop tinge oddly reminiscent of 10CC, which I have to say personally I dig more than the more C&W stuff. But the two differing styles work in tandem pretty well during the course of the six long tracks which made up the album.

The Happiest Man In The Carnival begins with a ghostly flute hovering over bass, percussion and keys, before becoming a little like the Rolling Stones more c&W efforts, but Keep On Juggin’ has more of the Beatles’ back to basics sound circa Get Back about it. Virgin Spring is another expertly rendered near-pop confection, but both Tasting The Life and Slipstreams end A Jug Of Love on a country rockin’ note. The band’s second and final single Devil’s Whisper/Virgin Spring follow, the a side’s speed picking did not trouble the charts, but it’s sprightly enough. After A Jug Of Love was released the band split up for good, leaving behind a whole load of potential and two very good albums.

The last five tracks on this disc were actually recorded in the band’s final days as the Action in 1968. Logically enough, they form the perfect bridge from the Reg King days to Mighty Baby’s first phase. Psych pop/rock with occasional references to their r&b days and a little light dabble in country too. My Favourite Day almost starts like a spacey ballad before the band unexpectedly thunder in and the sparky riff and attack of A Saying For The Day is a pure late 60s joy.

Following on from this we get a disc full of A Jug Of Love Rehearsals. As you might suspect, these are instrumental early takes of what would be refined on the LP proper. There’s a really nice organ sound throughout (and, it has to be said, some bum notes too) and you can see what Mighty Baby were striving towards before they added words into the equation. Even so I can’t imagine many would want to hear it over the finished versions. This disc ends with both sides of the first single Egyptian Tomb/I’m From The Country which are very fine and the short jazz curio entitled Christmas Jam.

Disc four provides us with a genuine oddity in the punningly-titled Day Of the Soup album. This LP was readied for release in 1970 before being junked by the band in favour of starting again with the A Jug Of Love material. It’s not hard to see why the decision to pull the LP was taken, but that isn’t to malign the efforts of the band here. Apart from Winter Passes, the album is really one long track Now You Don’t split into four part which segue into each other. During each part they jam around the musical motifs in ok fashion, showing each players’ instrumental skills nicely. But it was hardly going to set the world aflame, even in 1970 when side-long tracks were in fashion.

After the album we get four live offerings, the sound on which are probably the pick of the concert recordings here. The lengthy Now You See It is essentially the themes of Now You Don’t from the Day Of The Soup LP distilled into one piece. A country rock instrumental Stone Unhenged powers by, but Sweet Mandarin is a real driving ace that sadly never made it to the recording studio.

The two live discs which bring this set to a conclusion are of indifferent sound quality….decent bootleg level really. The set from Glastonbury was captured on cassette from the crowd, with the band having to play in a nearby field as acts on the main stage overran. This selection has a fair amount of audience/stage chatter (including a request for a toilet roll/durex from the stage) and tuning up and it becomes apparent over both discs that the band didn’t have a natural frontman after the exit of Reg King. A Blanket In My Muesli/India, which as mentioned above the band had been doing since their Action days, is the mainstay of both sets, clocking at well over 30 minutes at Glastonbury. For me Mighty Baby were much better heard in the studio, but these two live sets are nice to have to complete things.

Mighty Baby’s two official albums were quiet different, but satisfying. This set wraps up almost everything else, though I think there was a 1969 Peel Session which featured tracks off the first LP, but there’s more than enough here for any fans to happily lose themselves in. Though along coming in at the tail end of psychedelia they presented a convincing amalgamation of that sound with progressive rock on their debut. To their credit they didn’t rest on their laurels, turning in an effective country rock opus with their second album. Being both a link back to the sweaty all-nighters of the mods and a glance forward to the rough and ready pub rock of the mid-70s, Mighty Baby excelled for a brief but highly creative time. You can hear it all on At A Point Between Fate And Destiny.