Home Blogs ‘ In The Midnight Hour The Life and Soul of Wilson Pickett... 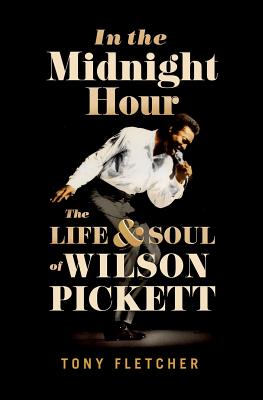 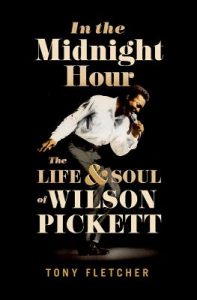 In The Midnight Hour The Life and Soul of Wilson Pickett

A long overdue and forensic assessment of arguably the greatest of all soul singers.

Unsurprisingly, Tony Fletcher assumed that a biography of Wilson Pickett must already exist and only when searching fruitlessly did he realise that no such book had been written. Therefore, we have the perfect match; the music biographer with an eye for the fine detail and a gift for making songs come to life on the page and the multi-million selling Soul legend with the addictive and often violent personality, with a story that is crying out to be told.

This is an authoritative study of the development of one of the finest singers of any generation, set against the backdrop of developments in both the Civil Rights Movement and in the identity of Soul music. Fletcher research is meticulous such as when he clarifies ‘Sign of the Judgement’ by the Violinaires as Pickett’s debut recording, rather than ‘Christ’s Blood’ with the Spiritual 5 as claimed in a BBC Radio Documentary. He is also a skilled narrator, effortlessly weaving together the ever shifting line-ups of vocal combo’s and song credits in the cut-throat world of publishing rights.

However, arguably one of the most revealing moments of the whole story is in the second chapter. Fletcher writes that it was common custom, as Pickett was growing up in Prattville Alabama, for a white person to be able to walk straight into the home of a black without knocking. This fact, difficult to comprehend as it is, perfectly encapsulates the harsh everyday realities of life in the South for blacks in the 1950’s. It’s no great surprise to learn that Pickett eventually took exception to this practice, which may partly explain why he headed North to Detroit. Also, he was never likely to settle to work in the cotton fields under the injustice of the sharecropping system. Everything we learn about the young Pickett suggests a man apart; a prodigiously talented singer and a volatile personality who may have found real trouble in a society that still demanded blacks did not answer back white men, or even talk to white women.

In Detroit, Pickett’s singing career began with the Gospel Group Sons of Zion and his talent was so formidable that the biggest vocal combo in the city, The Violinaires, felt the need to poach him as he was upstaging them in support slots. Pickett credited his time on the Gospel scene as crucial in the development of his voice, “his ability to hold that tuneful scream”.

Pickett agonised over the choice to move from Gospel to the Falcons, often credited as the first Soul group, on religious grounds. Finally, the need for money, and growing disillusionment with the level of devotion of some congregations he was singing for, saw him opt to join the Falcons, despite his misgivings about their “peanuts and popcorn music”. They however, had their reservations on the grounds that they considered Pickett “too black” but, after being turned down by Marvin Gaye, they accepted him.

However, his talent was such that it was never going to be constrained by the format of any group, even if they were the best around of that type. Formidable live performances cemented his growing reputation and Fletcher emphasises that even his screams were in tune, a note of their own. This is in contrast to Pickett’s main rival, James Brown, that dynamic vocalist with a live performance that left the viewer breathless but who, ultimately, couldn’t match Pickett for screams. The two men were rivals as top dog on the soul scene and there is an interesting contrast between Brown’s growing political stance, linked to black consciousness, and Pickett’s preference to keep his own counsel and lead by example.

There is a typically illuminating and informed account of the recording of ‘In The Midnight Hour’ in Memphis, co-written with Steve Cropper. Fletcher brings every note to life and you almost feel you are there, peering through from the mixing room as this all-time classic takes shape. However, possibly more revealing is the account of the recording of ‘Hey Jude’ a few years later with Duane Allman (who Pickett had mistaken for a “gorgeous blonde” on first sight) who had a hunch that the song could work for Pickett. Everything was pointing against covering a recent smash hit by The Beatles of all people but Pickett was persuaded during a lunch break to try it. The outcome tends to prove conclusively that Allman knew his stuff.

Pickett’s musical talent brooks no argument, however a character like him was never far from controversy. Never slow to resort to violence and the hardest taskmaster with his band, Fletcher is nevertheless able to find many musicians who worked with him who speak of him in the highest terms. However, the darker side is plentiful with drink-driving offences, assaults and even shooting at his brother. There is no doubt that as his career went downhill, ‘Wicked’ Pickett’s tendency to aggression and lawlessness went in the opposite direction. Opportunities to possibly comeback with a forceful relaunch of his career were left untaken as Pickett was content to coast on the established live circuit although the prominent references to him in The Commitments ensured he returned to the forefront of the public consciousness in the 1990’s. However, alcohol and illness took its inevitable toll in 2006 and it is hard to resist the conclusion that, for all his towering achievements, there could have been one last hurrah left that he just could not shake himself to deliver.

Tony Fletcher has delivered a long overdue and forensic assessment of arguably the greatest of all soul singers. It is highly recommended as essential reading for anyone with an interest in not only the flawed genius himself, but also the society that made him and the developing music industry within which he carved out a unique niche.

Tony Fletcher is on Facebook and tweets as @tonyfletcher

Super Furry Animals Return – Live Dates In May Announced Alongside...

Louder Than War Interview: The Hurriers

January 15, 2014
We use cookies to ensure that we give you the best experience on our website. If you continue to use this site we will assume that you are happy with it.Ok