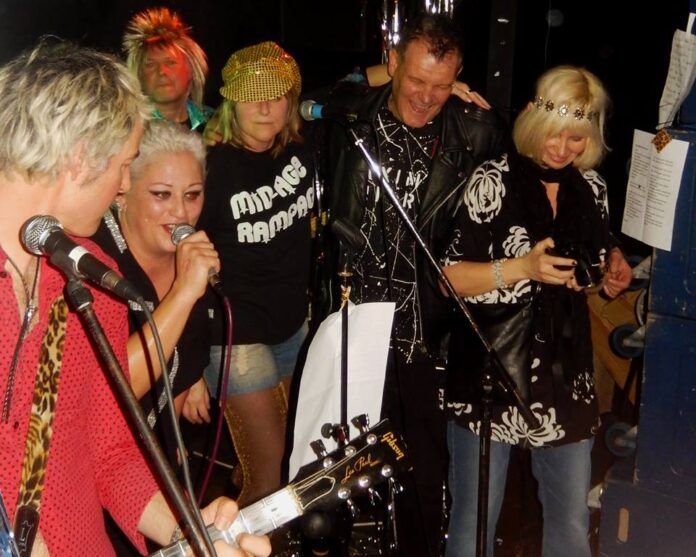 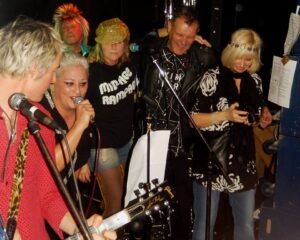 The Final Nite of cheap and nasty punk rock nights at the Barn (back of the Milton Arms, Southsea) Portsmouth saw a capacity crowd say an emotional, well, drunken, farewell to the venue. Ged Babey got off his sickbed to attend.

You really can’t put into words what a shame it is that the Flash and Lamb Punk nights at the Barn have to come to an end. There will be other venues perhaps and the regulars: bands, audience, liggers, photographers, pissheads, nutters, cool-cats and dudes old and young will still meet up to drink and party somewhere, but it won’t be the same. 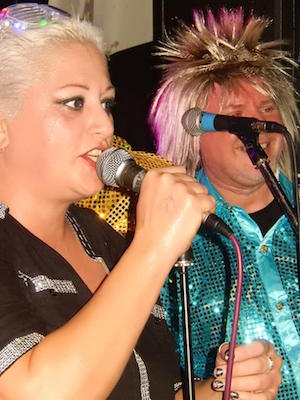 The felt-tip on the back of the hand, a heart for the final night, one loyal punter was having tattoo-ed into her skin the following day as a permenant reminder of the place. I have a reminder in the chunk taken out of the arm of my expensive spectacles after they went flying into the moshpit, to be retrieved buckled and scratched after being moonstomped on.

I missed Pinkie and Jon Lambs acoustic / ukulele set but caught the end of Richies Second Hand Citizens, complete with the best / worst cover of Hurry Up ‘Arry ever. Purposefully chosen and played to include the line “We’re going down the Barn!”

Shooting Fish just get better and better. Rather than repeat myself you can re-read my previous reviews here and here.

Pussycat & the Dirty Johnsons I also wrote about recently here. They closed the night in their inimitable style, kicking out the jams like no other.

Mid-Age Rampage were, for me, the surprise of the night; a Glam covers band made up of various punk veterans, Steve Kirk (from Night of Treason)  Lizzy Lastic  Chris Corvette and Albert Awful ( previously from a band called Dirty Love). The songs they cover are not all the obvious glam favourites, so for every 20th Century Boy there’s a L–L-Lucy  ( by Mud). They dress the part, Lizzy fires a bubble-machine-gun at the audience and rouses the rabble, and they sound like the Pistols and Heartbreakers having a laugh and camping it up. With some of the punters dressed the part and invited onstage to do backing vocals, this really was a lot of fun. They are the ideal party band. With Bollocks(y guitar).

And so … the Barn under its present management came to an end. God Bless her and all who drank, danced and rock ‘n’ rolled in her. We will not see her like again. 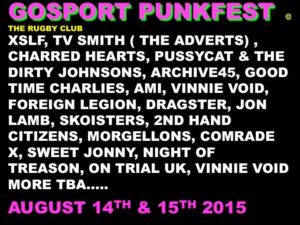 “Right hand man and stage manager Jon Lamb,  Tara Rez from The Duel and Keef Bubba, Vinnie Strevens – resident DJ. Too many bands to mention them all, but some like The Black Bullets, Second Hand Citizens and Mid-Age Rampage played their debut shows there.  Other great bands like Dirt Box Disco, The Bermondsey Joyriders, The Fallen Leaves, dragster, First Wave, Brassick Charred Hearts, The Featherz, Healthy Junkies, Tango Pirates, East Town Pirates and so many more played Pompey for the first time … and all the great local bands, Night of Treason, The Good Time Charlies, The Flying Alexanders, Shooting Fish, Archive 45 and Bullybones.  Thanks to everyone at The Milton, Max Edwards, Helen Angel T Smith , Ben and John, Tasmin Jane for doing the door, Helen Goss for pompeypunks,The Brummie gang, the Chi gang, the Crawley and Bracknell contingents, the local locals, everyone who ever came and supported us, Tel Hibberd Naylor for putting up with me, and anyone Ive forgotten.”

Coming up in August 2015 at Gosport Rugby Club is the self-explanatory Gosport PunkFest 2-dayer (poster above right) but before that in May, the Legendary Bash The Bishop affair in Worthing on 24th May (see Facebook Event Page.)

Previous  reviews from the Barn are below…