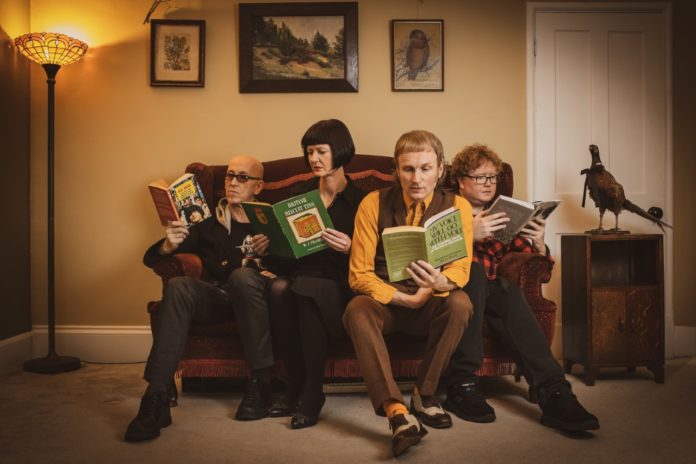 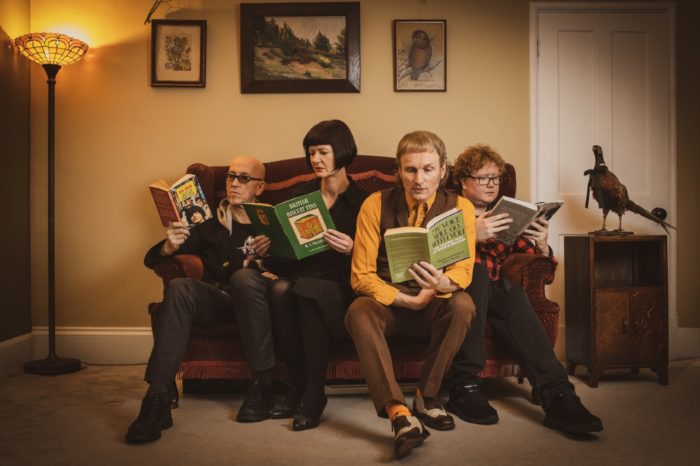 Micko & The Mellotronics uncover the other song on the double A side of their forthcoming single, ‘Noisy Neighbours’, set for release on Landline Records on 17 April 2020.   We told you about You Killed My Father already and previously The Finger, but this is the best one yet.

‘Noisy Neighbours’ is a riotous example of the lean, spiky guitar-driven sound that the four piece have been perfecting with an explosive production fizz by ex-Banshee Jon Klein and Micko.

Westmoreland, portrays seething paranoia, dark thoughts and strange goings on – possibly imagined, possibly not – all bubbling away behind the closed doors and apparent calm of suburbia.

Absolutely cracking guitar-playing from Jon Klein -formerly of Batcave superheroes The Specimen as well as serving in latter-period Siouxsie & the Banshees) and a nifty bass-line akin to Elastica’s Waking Up -played-on-all-the-wrong notes – from Queen of Frowns Vicky.  Bodes very well indeed for the debut album by the band due before the year is out.

Micko says of the inspiration for the song:

I used to live in a housing co-op with a number of serial complainers. It never ceased to amaze me the amount of endless energy certain individuals would have for complaint. There was one particular woman nicknamed ‘The Dragon’, her histrionics were noteworthy – rich source material for a budding songsmith.

‘Noisy Neighbours’ comes backed with the previously shared AA-side ‘You Killed My Father’, featuring inimitable piano touches and a fine string arrangement from the late, great Neil Innes, in what would prove to be one of the Rutles/Python/Bonzo Dog legend’s final sessions.

Here it is again. Micko’s vocal having a similar tone / intonation to the late Genesis P Orridge to my ears. He actually covered Godstar five years back on this album.

That is a great photo portrait by Ashley Jones of the band on a settee, each reading a book,  But what are they reading and what do their choices say about the band? I asked Micko.

(Guitarist) Jon is reading Nik Cohn’s ‘I Am Still the Greatest Says Johnny Angelo’, which is inspired largely by the author meeting PJ Proby and got Bowie going with Ziggy Stardust reportedly.

(Bass player) Vicky is reading a book about British Biscuit tins, author unknown, which takes first prize I reckon; she found it at work as forgot to pack one on the day.

I’m reading ‘My Voice Will Go With You’, the teaching transcripts of Milton H Erickson the father of Hypnosis.

(Drummer) Nick is reading Debbie Harry’s biography. What is says about us I can only hazard a guess, that’s one for the viewer to decide…

Personally I’d say that  – character and imagination in Rock’n’roll, vintage British style & design aesthetics, the mysteries of the mind and psyche, and the unexpurgated story of a glamorous pop icon – are all vital elements which make up Micko & The Mellotronics.

If you are currently self isolating lets hope you don’t have titular Noisy Neighbours, but if you do you can use the track to crank up and give them a taste of their own medicine.

Live Dates in  Brighton with David Devant & His Spirit Wife and London with Lara Smiles have been postponed – new dates will be confirmed in due course.

All words by Ged Babey with press release content/quotes in italics.