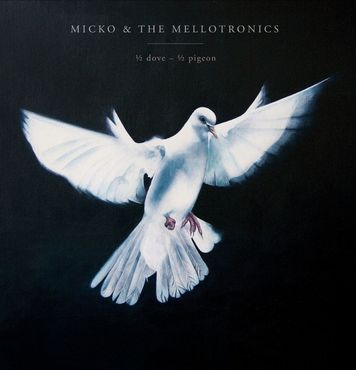 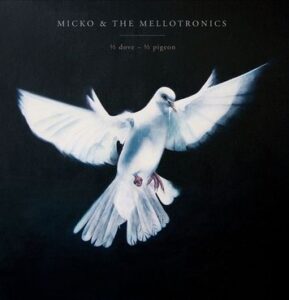 Shipwreck of the streets/  set the world alight / With your powerful imagination..

There has not been an album quite like this for years…  A faultless, bewildering, literate, clever album full of strange and unusual art-pop songs.

Nor has there been a new band quite like this: fronted by an individual who has that oddball charisma and aesthetic sensibility once commonplace with pop-stars: – Jarvis Cocker and Pulp.  Luke Haines and the Auteurs. Steve Harley and Cockney Rebel…  that kinda thing, y’know?

In partnership with a guitar-hero with a classic-style and a strong, cool rhythm section -the Mellotronics do seem to hark back to earlier times.

Musically they are simple yet complex, with gleaming riffs and hooks re-appropriated from old glam and psych. Classic Motown and Motor city rhythms.  The Bowie-influenced, artier side of Britpop which was in turn inspired by smart-punks and post-punk, but relocated thru time and space to the timeless Now.

It has taken Micko Westmoreland, actor, dreamer, artist years to get to this point. He needed a right-hand man to handle the musical muscle so he could concentrate on the tumble and flow of ideas and words from his brain.

He found Jon Klein – masterful, under-rated guitarist (the Europeans, the Specimen, Siouxsie & the Banshees latter-period.). With founding member Nick Mackay (drums) and the enigmatic addition of Vicky Carroll (bass) the line-up was complete.

Matching their infectious art-punk sound with lyrics that are erudite and entertaining, Westmoreland crams in innumerable references to pop-culture, philosophy, history and more throughout. From punk-rock ditties about Filipino dictators (Imelda) to philosophical fantasies about the work of eminent psychologist Georg Eifert (The Fear) and life imitating art in New York City (Halcyon Days), to blowing apart the petty and mundane in life with rollicking ripostes (Noisy Neighbours) to reflections on the passing of time (You Killed My Father), ½ Dove – ½ Pigeon is an education of the most eccentric and electrifying kind.

Micko enlists the help of some mates who play on the album and include The Specials’ bassist Horace Panter (on shoulda-been-a-hit single the Finger)  the extraordinary Terry Edwards (on a few numbers) plus the late Bonzos great: Neil Innes -on the suitably strange psycho-drama ‘You Killed My Father‘.

I slipped in a sly reference to playwright Alan Bennett into the intro because Micko does share some of his characteristics as well as birthplace and accent. It’s in the vocabulary and language he uses in his lyrics: the net curtains twitch in Noisy Neighbours, there’s a scout hut and Leeds market in Psychedelic Shirt.  A member of the clergy accepts free cups of tea and biscuits at a jumble sale in Sick and Tired.  Whilst You Killed My Father is a whole ‘Talking Heads’ synopsis in itself in song form.

It’s not a great rock’n’roll reference point really, Alan Bennett, but it’s his observational wit and knack for finding darkness in the everyday that is key. That and a Devoto-like detachment.

Klein on the other hand is a semi-retired hedonist, co-founder of the Batcave and guitar-playing alchemist. He turns the Mellotronics into a magical realist proposition. There is some utterly brilliant guitar-playing on Imelda and a beautiful solo towards the end of Sick and Tired.

I can’t believe there hasn’t been a song called Halcyon Days before now. Suede or Sparks have missed a trick, but it’s the Mellotronics piece de resistance.

Halcyon days and exotic ways /  You’re a walking work of art / So party like New York City, / Until the daybreak’s apart.

It would’ve been a better album title than ½ dove – ½ pigeon also, an album which has that classic old-school thing of having one side of catchier upbeat songs and the second of darker wallow-deep growers.

The Fear despite sharing a title with Pulp has a similar gait to Cockney Rebels Mr Soft, echoes of Transformer and is a great piece of psycho-analysis you can tango to.

The Now is a glam-rock mindfulness bossa-nova epic and Good Friend is the letter-best-not-sent and a practically punk-rock steeplechase: They sound kinda like Wire reassembling glam whilst Terry Edwards blows up a storm.

Imelda was inspired by the extraordinary story of Filipino politician: Imelda Marcos; politics, deception and a massive collection of shoes: perfect source material for Micko.

There’s fun to be had spotting the riffs and ideas seemingly stolen from other songs:  Lucifer Sam and Waking Up are close calls but seem to have less than seven consecutive notes in common to avoid litigation.

Once you’ve acclimatised to Micko Westmorelands wavelength – there are hours of fun and contemplation to be had submerging yourself in his songs.

Face the music of your own demons...  He sings at one point and at another:  I don’t exist to impress the world, /  I’m here to make myself feel good /  Try to see life as it is / Allow myself to live as I should.

This is Pop – as a cool band once sang, but has a depth and a gorgeous musicality about it.

This is a proper album like the first Suede and debut Auteurs albums, not to mention Magazine’s Real Life, Piper at the Gates of Dawn or any of your odd New Wave or Psych favourites which never quite fitted in with prevailing winds.