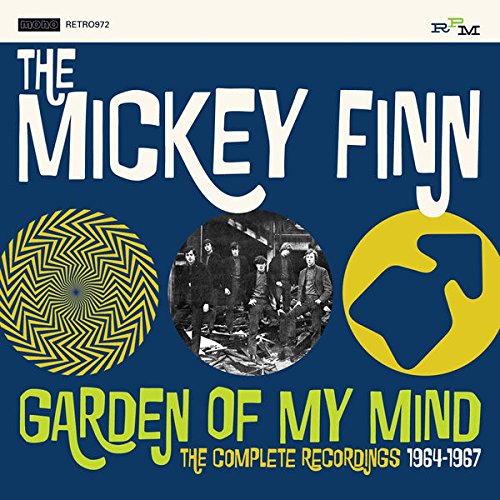 ‘60s Mod band’s entire recorded output available for the first time, with production by Shel Talmy and a guest appearance by Jimmy Page.

Not to be mistaken with the Marc Bolan collaborator, this British cult band with Mod leanings, The Mickey Finn only put out a handful of singles, and it’s the first time that these (plus a couple of previously unavailable demos) have all been collected together. They were arguably the first British band to try their hands at ska- with their cover version of Bo Diddley’s Pills, included here. A very different interpretation to the rock & roll version by New York Dolls a few years later, this is also the band’s true debut, credited to Mickey Finn and The Blue Men, and also featuring a pre-Zeppelin Jimmy Page on harmonica on both sides of the single. (Although Page played some live dates with the band and was photographed with them, he was never an official member).

Before it was abbreviated, the same band name was also used for their false debut, the instrumental Tom Hark, another ska number (which was made famous a decade and half later by Piranhas, who added lyrics to it). It’s false because the band claim they had no involvement in the making of this record. Despite this, it is still included in the collection, probably because their name is on the original record. Elsewhere we have the R&B stomp that is I Still Want You, the cracking Mod-psych banger that’s the title track of this set, and my personal highlight, the freakbeat head-spinner, Time To Start Loving You.

The Mickey Finn covered a lot of musical ground in their short-lived career, and despite their modest vinyl output. It’s a shame they didn’t record more. An album would have been nice, but they never got around to actually making one: so in the absence of this, it’s good to have the singles all in one place. And the sleeve notes feature an insightful interview with the surviving members of the band. Another great release by Cherry Red’s RPM offshoot, who also gave us the cracking Mod box set, Keep Looking, released last year.

~
All words by Arash Torabi. More writing by Arash can be found at his Louder Than War author’s archive.