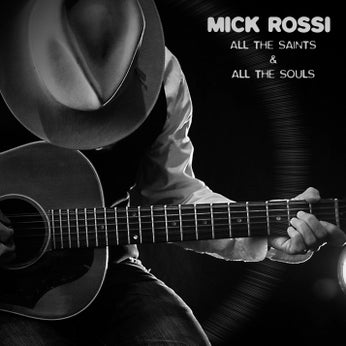 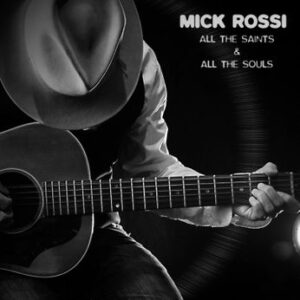 Mick Rossi – All the Saints and All the Souls

The latest artist to release an album created during lockdown is guitar empresario, the mighty Mick Rossi. Like many people, the worldwide lockdown has provided Mick with a period of self-reflection. Time to sit and think. The resultant debut album from the Slaughter & the Dogs guitar hero, very much reflects these often very personal contemplations in the fourteen songs proffered in this sumptuous release.

The last time I saw the talented gentleman in question was at a gig (remember them?) I was fortunate to be at, given more recent events, in Glasgow’s Audio as part of the late Walter Lure’s band. The night in question was one that will live long in the memory for many reasons, and in no small part due to the quality playing from Mr Rossi. Prior to that, it was as part of the Scotland Calling line-up playing with Slaughter.

A Punch with a Different Power

Fans of both bands may be surprised at All the Saints and All the Souls. Don’t expect any in your face debauched punk rock n roll here. There may a hardcore of dyed in the wool punk fans who will hate this record, but that is entirely their loss. The album is a triumph. Stripped back, raw, and emotional – the mostly acoustic guitar-based songs proving you don’t need to be loud and brash to pack a punch. And that punch is one that hits you with a different sort of power, the power to tug at your heart strings, the power to reach out from the speakers and give you an aural hug, the power of human spirit, love & hope.

Of the fourteen tracks on the album, there are thirteen originals and one cover. A cover that strips back the original and re-invents it. Rossi’s version of the Wings classic, Jet, sheds the ska tinged guitars and the vivacity of its soar away chorus and turns the song into a delicate ballad to great effect.

Rossi has gathered together a handpicked list of musicians and vocalists (links with names such as Black Crowes, Death Cab for Cutie and of course band mates from Slaughter) to help create this masterpiece along with Craig Parker Adams to record and engineer the album. These have obviously been inspired choices as the resultant collection of songs hits the mark perfectly, and I’m sure the effect the songs have on this listener is exactly what I imagine Mick and Co would have hoped.

The album opens with the title track, and from the off Rossi’s guitar sings, the subtle layering of acoustic and electric, and the addition of strings adding to the spirit of the song. The chorus lodges itself firmly in the psyche and lays down the expectations for the remainder of the album.

Singing With Angels is as joyous and uplifting as it is raw and emotional, and while Mick had Bowie in mind while writing, the listener will undoubtedly add their own visions of who else is now giving “the gift you gave to all the world”. Both a glorious celebration and an emotional packed tribute to the loss of a legend.

Such is the subtle beauty of many of the songs on this album, it feels like we are intruding on some deeply personal heart-breaking moments. There is a delicate melancholy that pervades the whole album adding to the poignant feel of the tracks, making them as thought provoking and emotional as they are beautiful. Why Must I Cry is a case in point. An unencumbered track, with acoustic guitar backing Micks lament “you don’t even know something is wrong”.

Shout it Out Loud

Don’t get me wrong, the album is as inspiring and uplifting as it is raw and emotive. Songs like Shout it Out Loud encouraging you to let it all out by shouting/singing out loud what you feel, an encouragement to stay “true to yourself”. There will be an end to what we are all currently going through is the message continued later on the album on “Hang On” – another track that manages to be tinged with an element of sorrow, but at the same time fills me with a warm glow instils a sense of hope.

There are a few musical reference points that I can hear on the album, the inspirational Butterfly is more akin to the likes of epic Big Music of Mike Scott and The Waterboys than Slaughter or their punk ilk.  While elsewhere on some tracks Rossi’s vocal is occasionally reminiscent of the wonderful Ezra Furman. Both massive positives in my book.

Music is a form of therapy, and this album came just at the right time for me. A reserved brilliance and an unreserved triumph.

Order your copy from https://mrwhippyproductions.co.uk

100% of the profits from the first 200 pressings of “All the Saints and All the Souls” will be donated to the front-line workers of the NHS in Manchester.