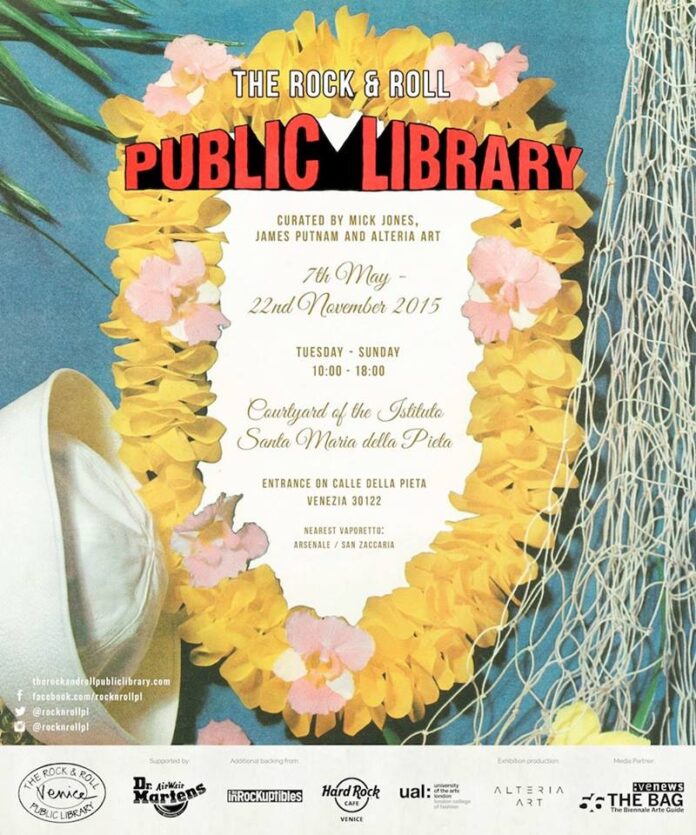 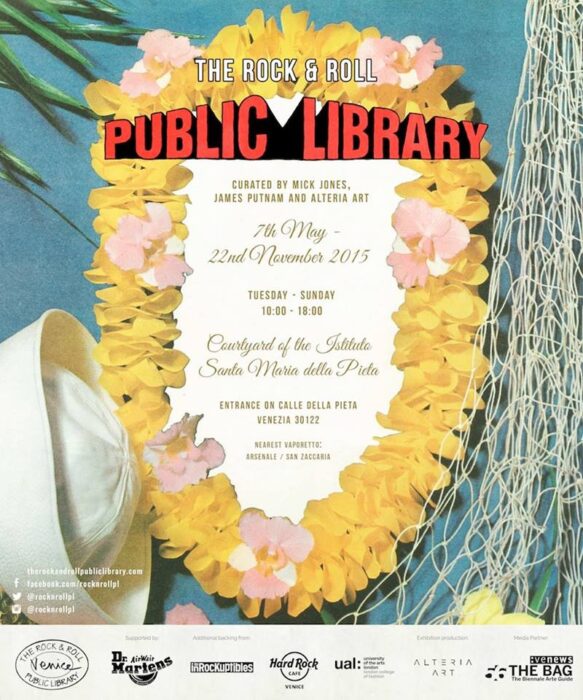 A treasure trove of popular culture has washed up on the banks of Venice’s grand waterways this month following the opening of The Rock and Roll Public Library during the 56th Venice Biannale. A site-specific installation exploring the notion of archive as art, the library is an impressive collection taken from the impressive archive of iconic musician and producer Mick Jones of The Clash collected over the past forty plus years.

Housed across four huge stores in West London, the archive is an Aladdin’s Cave of popular culture brought together by Jones. Comics and cartoons from his childhood sit alongside American icons gracing the covers of Time Magazine, newspaper clippings, music magazines, punk fanzines, trashy pulp fictions, record covers and posters, an epic cacophony of the past lining dusty warehouse shelves.

These relics of the last century, capturing a significant slice of British music history as told through Jones’ eyes and experience, trace a spark of imagination in service to the idea of continual creativity. “It’s a personal, cultural and social history of our times” says Jones, “and through that it extends beyond the local to the global”. The library stands as a testament to pop music and pop art, to the importance of finding that spot “in the gap between art and life” to employ the celebrated Robert Rauschenberg phrase.

The Rock and Roll Public Library is situated at Instituto Santa Maria Della Pieta, Venice a short walk from the Arsenale venue for the Biannale and next to the Hotel Metropole until November 22nd. The instituto is a charitable cultural centre that will also be hosting the National Taiwanese Pavilion amongst other collateral events.

Curated collectively by Jones himself, James Putnam and Lauren Jones (Alteria Art), the library represents just the tip of the iceberg of The Clash songwriter’s full archive. Spread over three rooms the exhibition features wall mounted installations of books, comics and other printed matter, as well as a 1970s listening booth allowing visitors to listen to music from the period. Display cases decorated with vibrant collagesof visual material torn from the archives house more valuable items, whilst vinyl records, stage outfits and other punk-era garments hang from the ceiling.

The final room is an installation that recreates Jones’ living room, offering an insight into how the archive itself has materialised. Visitors are able to interact with the archive from its collector’s perspective, sit in his chair, touch and pick up items, read and relax – as if in the home of a good friend.This physical interaction with the materials evokes memories and recollections, personal emotions and unique attachements in each visitor.

This personal relationship with the library is explored by celebrated British artists Tim Noble and Sue Webster, who will make their own curated selection of items from Jones’ archive, a personal edit of objects that speak to them and will be displayed within the exhibition.

In collaboration with The Vinyl Factory Mick Jones released a limited edition record coinciding with the opening in Venice on May 8th. The vinyl, called ‘Ex Libris’ features all new tracks written and recorded by Jones in his studio at the start of 2015. Artwork has also been produced by Jones and features a booklet of images.

This edition of The Rock and Roll Public Library is supported by Dr. Martens, with additional backing from Les Inrockuptibles and London College of Fashion, UAL. The launch event, featuring performances from Sugarmen, Tom Bright and Mick himself was kindly supported by The Hard Rock Cafe, Venice.