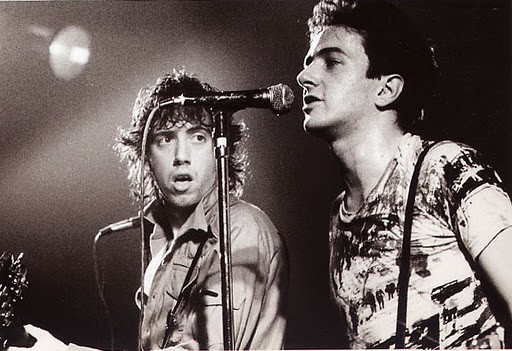 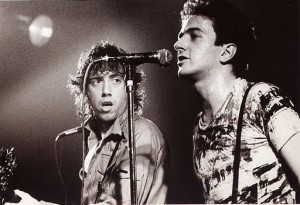 Mick & Joe in The Burning Of Acton Town Hall

I never saw the Clash. I loved them so much though. They made me pick up a guitar, want to throw a brick through a window, go kick a copper up the arse and jump up and down with fire in my belly and adrenaline coursing through my veins.

From the second single I ever bought (English Civil War) through to Combat Rock and back again, the band help shape the way I looked at life and put an electric shocker through the system every time I came into contact with their music.

Unfortunately by the time I started going to gigs around 83/84, Mick had left and I didn’t fancy seeing a 5 piece that looked like a bunch of Rock and Roll rejects with shit haircuts that would have fitted in more with some sort of mutant film shoot than the sportswear that me and my mates were rocking.

We would have enabled a right old off with the dog on a string Camden market punky tramps that would have been at Brixton Academy. Cut The Crap Joe…… 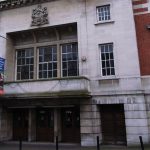 Joe Strummer and the Mescaleros are playing Acton Town Hall in a benefit for the striking firemen who were risking life and limb for shit money and a cut in service and public safety. The first strike by this union in 25 years. It had the hallmarks of a return to a more potent past in more ways than one.
Never a more deserving cause but such an apolitical landscape would never get these boys and girls the Nation’s backing they so richly deserved.
Having seen The Mescaleros a couple of times and seeing Joe’s pumping left leg back in full flow the gigs had been absolute celebrations.
I wasn’t missing this and neither were the team.

As we started drinking in the bar and checking out the fire-fighters union banners from all over the country a buzz went round that Mick Jones was in the house. Two minutes later Mick comes into view and a load of old Clash nonce’s are on him like flies round shit. (That’s not to say, that I didn’t get a little tingle watching the geezer greet everyone with a smile and handshake).
My long standing pal, Al says to me – “Do you think he’ll get up later?”
“Naaah fuck that, he’s just here for the crack” 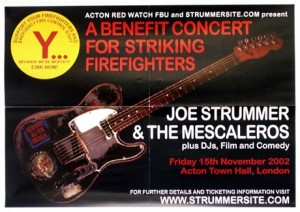 After a few cans (yes they entrusted us with cans, and at a decent price) and meeting mates from my old manor we go and listen to Mark Steel the social comic do his bit and basically die on his arse.
He hated doing rock and roll gigs as he believed no one was there to listen to him witter on (too true) but he did pay tribute to The Clash and the effect Joe had on him as a kid.
Then after a few more cans, the FBU main man Andy came on and did a magnificent speech reminiscent of a calmer Scargill and rallied the crowd ,the fire-fighters and their families (loads of kids there as well, hopefully who’ll take the inspiration of the evening on into the future).
Like Mark Steel, Andy told us about the effect that The Clash’s Rock Against Racism appearance in Victoria Park had on him growing up and how quickly Joe agreed to do this gig to help us in the fight against the rancid/warmongering government.
By the time the band hit the stage, everyone’s well hyped and ready to party like its 1978.

Now the Town Hall must have held 500 tops, and was ideal for a gig.
Well those 500+ will remember this night forever.
The band walk on to a football crowd roar and the low lighting works wonders for the hall’s atmosphere.
Into Shaktar Donetsk and the groove is clearly bouncing back to the band who look assured and confident.
Then third song in Joe announces Rudie Cant Fail!!
That was it; we’re off stepping beats out on the floor like we’re 13 again and jumping up and down on each others shoulders. Everyone was in it, no posing, posturing, just sheer love and enjoyment of the moment.

Then Tony Adams was a moment for more cans and as I walked back in the room as I hear
“MIDNIGHT TO SIX….” Joe’s supposedly fav song and there’s plenty of us who’d agree that White Man In Hammersmith Palais is arguably one of the greatest songs ever written. Carnage!
A rip through a mix of classics and newish anthems reaches another high when suddenly Al bombs to the front for Police On My Back.
To watch my long standing pal going barmy with his fist in the air to the Equals number fired up shouting “Sunday, Monday, Tuesday….WHAT CAN I DO??” is even more remarkable as his only employer has ever been the Metropolitan Police.
Me and Simon are in hysterics, and Sean is shaking his head laughing.
Coma Girl is followed by a riotous I Fought The Law and breather for everyone involved.

The encore….. Bank Robber, again we’re in group hugs being silly as arseoles,
“Some is rich and some is poor, That’s the way the world is..” and there’s movement stage left and Mick saunters on, plugs in and just starts playing??!!!

Joe’s been gone now over 7 years, The Clash’s legacy hasn’t been tarnished (as if it ever could) by a reunion, but the resonance of that moment Mick declared his public love for Joe which obviously didn’t have the impact until Joe’s untimely demise is stuff of legend .
I’ve heard the likes of Robert Elms and Billy Bragg would have given their right arms to have witnessed the return of the old team for the first time since that massive festival in the US in 83, where they were so far away from each other on the stage they were in different postcodes.

The thing that I remember more than the man love, the fire fighters collecting buckets, the Northolt mob in the back corner like naughty schoolchildren smoking spiffs and cornering credit cards, the old bill outside in case, the kids dancing to Police and Thieves, the sound of cans hitting the floor in a frenzy is the smile and the size of it on Mick’s face as he looks at his mate of who he conquered the world with, changed lives with, encouraged new bands to be like with and rocking the house with as he hits that groove…

Wide and high the gaff is grinning, burning, in a heartbeat the band the have gone up a gear and as the cheers ring …1234 …WHITE RIOT!!…You can imagine the rest! I think I had a little chuck up after paging on 12 cans of Carling.

And then there could only been one finale…. LAAAANDONS BURNING!!!!!
As I was born within the sound of the Westway (just) it has always made me think how a strip of road can be such an iconic landmark and why I’d give a fuck about it?
But thinking about Wilmcote House (the tower block where Mick lived with his Nan) and its importance in the early days of the Strummer/Jones partnership, I can never go in or out of West London without thinking about The Clash or specifically this song.

Never has the sound of a teenage boredom sounded so celebratory and as quick as it started, it was over in a flash. “Didwefuckingdreamthat??” was one shout I heard as we were wrestling through the doors.
Another of”ÂThey got to get it back on!” was another.
As we excitedly hit the chilly High St drenched in beer, sweat, fucked from the bouncing and hoarse from the shouting (I don’t sing) and smiling at the obligatory Socialist Worker seller (which I hadn’t seen since a Redskins gig in 1986) and work our way back to the suburbs and home counties little did we know that we had witnessed the first and last reunion of Mick and Joe.

How the death of Joe affected me is another story but what I and most other people love is that , Joe and Mick didn’t reform for the tens of millions that always seemed to be on offer, but they reformed to help brave upright working class people in their hour of need. 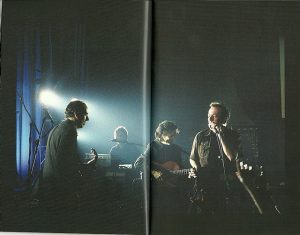 LET FURY HAVE THE HOUR, ANGER CAN BE POWER
DO YOU KNOW THAT YOU CAN USE IT?!