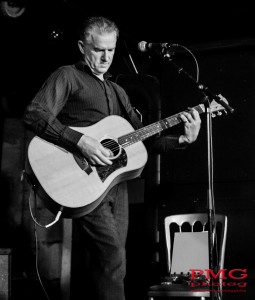 Mesmerising return by former Bad Seed Mick Harvey, the multi-instrumentalist who served as the musical arranger on all The Birthday Party albums and with Nick Cave and the Bad Seeds until 2009. Youthful compatriot Suzie Stapleton makes her mark with a stunning support set.

Mick Harvey might not be a household name like his former school friend and band mate Nick Cave, but for those who have taken a close interest in the work of The Birthday Party and the Bad Seeds, it’s readily evident that Harvey played a pivotal role in the two groups that had evolved out of their high school band The Boys Next Door. On those bands’ classic albums, Harvey often played an analogous role to that of John ‘Drumbo’ French in Captain Beefheart’s Magic Band, fleshing out Cave’s initial musical ideas into fully-fledged songs.

In terms of his solo work, Harvey is probably best known for his two superlative albums of Serge Gainsbourg covers, ‘Intoxicated Man’ and ‘Pink Elephants’, yet he has recorded a series of solo works in recent years which have generally remained under the radar.

Thus, when Harvey appeared in Glasgow on his current tour, it was in the intimate surroundings of Oran Mor’s basement concert hall in the converted church on the corner of Byres Road and Great Western Road. The seated audience consisted of a nice mix of age groups, perhaps reflecting the ongoing appeal of Harvey’s work to a diverse range of music fans.

The evening was kicked off in fine style by Suzie Stapleton, a singer-songwriter who recently relocated to London from Sydney via Melbourne. Stapleton made a dramatic impact with her opening number, ‘Hit’ and had the audience won over as she introduced ‘Song of the Artesian Water’, a set highlight which contained a reference to Glasgow’s illustrious engineering history. 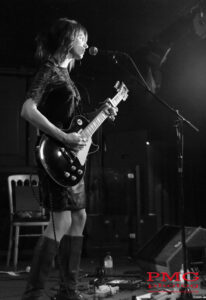 It’s rare that a new artist comes along who genuinely defies easy description, but this is certainly the case with Stapleton. Her songs seem to inhabit the dark, intense corners of the soul in a manner not dissimilar to Nick Drake or even Elliott Smith, yet Stapleton’s guitar-playing is at once raw and tender, at times evoking the elemental spirit of Link Wray or ‘Sister’ era Sonic Youth, especially when Stapleton twists a song into an untrammelled solo.

Utilising resonant open chords on her overdriven Gibson Les Paul, the effect is somewhat akin to PJ Harvey liberating her deepest emotions through fiery eruptions of No Wave folk-blues. Stapleton plays with great feel and spontaneity, coaxing controlled feedback with the judicious use of an e-bow and tremolo-picking ferociously like Dick Dale’s spiritual daughter. The sheer visceral intent of Stapleton’s playing is a reminder that she comes from an underground music community that spawned Penny Ikinger and Charlie Owen, bloody-minded guitarists who make every note count. And yet, Stapleton plays with great sensitivity, varying her right hand attack from tender caress to brutal gouge as the song demands.

While Polly Harvey is perhaps the most obvious reference point, that only tells a fraction of the story. Stapleton’s lyrics are dark, intensely personal and poetic, but her voice is perhaps the most arresting aspect of this captivating performer’s repertoire- a deep, expressive contralto that hints at Nina Simone, Shelby Lynne, Lucinda Williams and Patti Smith, yet remains utterly distinctive. Truth be told, Suzie Stapleton really doesn’t sound like anyone but herself- a bright new star in the ascendant.

With the appreciative audience now well-primed, Mick Harvey took to the stage accompanied by long-time PJ Harvey collaborator Jean-Marc Butty on drums and JP Shilo on Fender Jazzmaster and fiddle. Harvey was in very fine vocal form, his smooth, authoritative voice perfect for the narrative nature of the songs. Butty’s drumming was a masterclass in understatement, making much use of the floor tom in a clearly Mo Tucker-influenced percussive style that created an atmospheric canvas for Harvey and Shilo to paint their evocative vignettes with Harvey’s acoustic strumming and Shilo’s sensitive deployment of the full range of the Jazzmaster’s sonic possibilities. We got shimmering twang, subtle harmonics played behind the bridge, Sonny Sharrock invention and all points in between. Shilo switched to country fiddle for some songs, under-scoring the Scottish and Irish folk roots which were present in the DNA of these songs, as they are in the work of so many Australian artists, The Saints and The Go-Betweens being prime examples.

Harvey’s set created a dream-like atmosphere, each song forming part of a panoramic picture. With Lee Hazelwood’s ‘First St Blues’ opening proceedings, the majority of the songs comprised of selections from 2011’s ‘Sketches from the Book of The Dead’ and 2013’s ‘Four (Acts of Love)’.

Like Stapleton, Harvey also acknowledged Glasgow’s past, with a reference to The Sensational Alex Harvey Band’s ‘Midnight Moses’. Glasgow’s celebrated son had been a key influence on The Boys Next Door, who covered several SAHB numbers in their live performances. Perhaps Alex’s catholic tastes in song-craft, be it music hall, blues, country or rock ‘n’ roll, had played a formative role in the development of his younger namesake’s own predilections. Certainly, SAHB’s use of innovative arrangements to make a song their own must surely have rubbed off on the budding musician.

The closing section of the show- including a generous encore- yielded many delights, most notably the surly ‘Down on the Street’ swagger of ‘Famous Last Words’, a stunning take on Guy Clark’s ‘Hank Williams Said It Best’ and ‘The Bells Never Rang’, its title a pleasingly serendipitous connection to St Mungo’s Bell, “The bell that never rang” in Glasgow’s historic motto and coat-of-arms.

A raucous version of Exuma’s ‘Summertime in New York’ introduced a thrilling free jazz squall to the encore and Harvey, Shilo and Butty concluded with an emphatic cover of Gainsbourg’s ‘Bonnie and Clyde’, slightly lessened by the absence of Harvey’s wife on vocals due to illness.

Explaining that he had been touring a separate show of Gainsbourg covers, Harvey floated the possibility of another Glasgow concert dedicated to the work of the master provocateur, drawing a rousing roar of approval from the appreciative Glasgow audience.

All images by Pat McGuire of PMG Photog. Many thanks to Pat for his excellent work at short notice.

All words by Gus Ironside, whose Louder Than War author’s archive can be found here.