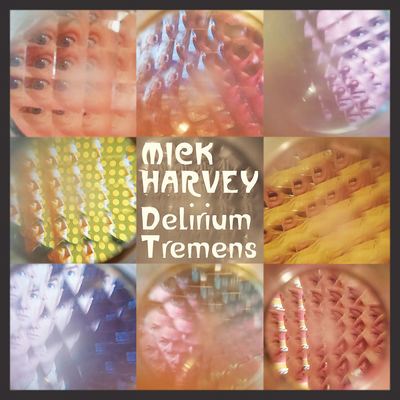 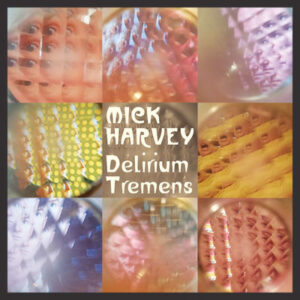 It has taken 20 years for Mick Harvey (former member of the Birthday Party and the Bad Seeds) to resume his project of translating Serge Gainsbourg’s songs into English and after the reissue of the first two volumes – Intoxicated Man and Pink Elephants – as a double album in 2014, here is, what for many is the long hoped for continuation of the series. Ged Babey is delirious.

I am an ignoramus.  I never knew what the letters in “the DT’s” stood for, until now.

delirium tremens   (dĭ-lîr’ē-əm trē’mənz)
An acute, sometimes fatal episode of delirium that is usually caused by withdrawal or abstinence from alcohol following habitual excessive drinking or an episode of heavy alcohol consumption. It is characterized by trembling, sweating, acute anxiety, confusion, and hallucinations.

This album, Delerium Tremens,  is up there with the Bad Seeds very best work.

It is also probably the best of the three Mick-does-Serge volumes, in terms of sheer musical wallop and being a fully-cohesive album is concerned.    It seems darker and sexier. It has an arrogance and a world-weary ennui.  A vicious tongue and a fist in a velvet glove. Mania and lassitude.

“I envisage the worst..” and “I am the Man with the Cabbage Head” are sentiments and lines that I can easily imagine the Nick Cave of twenty-years-ago groaning out with that unique mixture of gravitas  and wry-humour.

Mick Harvey performs them well, but the fact some of the music herein has echoes of the Birthday Party, makes me yearn momentarily for it to have been a partial reunion of the surviving Party members.

But fuck that, this is a astonishing work, whether or not you are a Gainsbourg fan or a devout follower of Harveys various bands and film-music over the years. You might well only have heard of Mick due to the fact his  cover of Manu Negra’s ‘Out of Time Man’ appeared in an episode of Breaking Bad. And if you have, get this album first and work backwards.

There is not an English equivalent to Serge Gainsbourg really.  Oliver Reed and George Best come nearest to his status and legendary loverman and drinker, only they didn’t write clever, funny, dark songs.

Jarvis Cockers onstage persona and the sleazy & darker side of his songwriting come as close to Serge as any Englishman has got.  A couple of the songs on this album reminded me of the fact as they do sound distinctly Cocker-esque.

Anyway, here are some facts and figures from the Press Release

Delirium Tremens brings us another wide cross-section of Gainsbourg material. From 1976’s ‘The Man With The Cabbage Head’ (L’homme à Tête De Chou) all the way back to early songs such as ‘Deadly Tedium’ (Ce Mortel Ennui) and ‘Coffee Colour’ (Couleur Cafe) from the late 50s and early 60s. There is even a version of ‘SS C’est Bon’ (Est-ce Est-ce Si Bon), from Gainsbourg’s controversial album Rock Around The Bunker, an album drenched in black humour and bad taste, coming as it does from a French man with Jewish ancestry. In addition, Harvey presents a selection of five songs from the TV special ‘Anna’ (starring Anna Karina) – including ‘Don’t Say A Thing’ (Ne Dis Rien) – with the female parts here executed with enormous charm by Xanthe Waite who has been joining Harvey on his recent shows. The album is rounded out by a beautiful rendering of the late period Jane Birkin duet ‘The Decadance’ (La Décadanse) with Harvey joined on vocals by his wife Katy Beale.

Gainsbourgs lyrics still manage to break taboos and cause offense to those who wish to be offended.  Requiem For A Cunt ( from Pink Elephants)  still stands to my mind as the greatest song-title ever. Lemon Incest doesn’t bear close examination but was based on a pun.

Relationships are ‘Deadly Tedium’ except for the sex, which go “From desire to disgust and from disgust to desire”.   Serge prefered his women ‘Coffee Colour’ it seems. ‘SS C’est Bon’ is very black humour indeed from ‘Rock around the Bunker’ (which you can read about here), not that you can hear the lyrics that well as its sung machine gun fast.

‘A Violent Poison That’s What Love Is’, ‘The Decadance’ and ‘I Envisage’ are the three absolute killer tracks – venomously passionate, languid & sensual and deliciously doom-laden respectively.

Mick Harvey has carved out a highly respectable and respected career path for himself on his own, but the guitar on some of these track (SS C’est Bon is very Mr Clarinet) is so reminiscent of the dear, departed Rowland S Howard that its impossible to shake the ghosts of his former co-conspirators.

What Harvey achieves is translating these songs without loosing the feel and intent of the originals and retaining the poetry.

In ‘The Convict’s Song’: “Qui ne s’est jamais laissé enchainer,
Ne saura jamais ce qu’est la liberté”, becomes “He who has never been under lock and key, will never know what it is to be free”.

Serge was a prisoner of his own desires but at the same time, they set him free it seems.

Mick Harvey is the perfect musical  ghost autobiographer for the great man, and this is his finest piece of work.