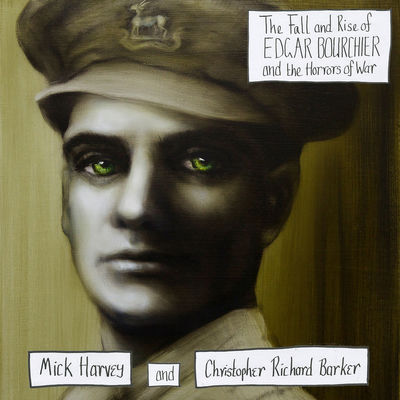 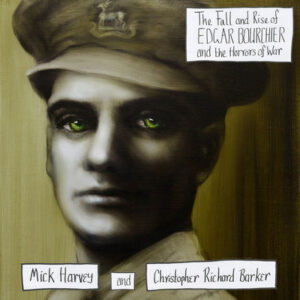 “I am the lost bastard son of war and I bring you death and destruction!
Death & destruction… DEATH & DESTRUCTION!”

The album examines the work of a long forgotten World War I poet, Edgar Bourchier, through his poetry as put to music in a concept album. Its release coincides with the 100th anniversary of the Armistice, on 11 November 2018.

Listen to the first track, a violent and pertinent reminder of the horrors of all war, not just the Great War, ‘The Lost Bastard Son of War’.

The works of this long forgotten war poet arrive in 2018 indirectly from the trenches of the Western Front. The wider narrative takes us from Bourchier’s birth in Warwickshire in 1893 through to his final school days and then his pointless death at Passchendaele in 1917, aged only 24. It continues by virtue of the poetry being posthumously published in 1918, adapted into song via a proposed cabaret treatment influenced by the Weimar Republic, through to an Olympia Press reprint of the poems in the 1960s, and then onward into the late 80s when The Moon Lepers translated his words into song. In 2018, Bourchier’s words were revived when the author Christopher Richard Barker approached Mick Harvey to ask if he could help him recreate the scores that had been discovered for the unrealised cabaret show. Happily, Harvey’s interest was piqued.

The route was indirect though, not just because of the twists and turns in the story of Edgar Bourchier and his poetry, but also because Bourchier’s entire backstory and poetry was constructed by Christopher Richard Barker, an author who initially created the character while working on his novel, The Melancholy Haunting Of Nicholas Parkes.

Barker paused from this venture to approach Harvey to ask for his expertise with arranging and recording the scores. In response, a 15-track album was written by Harvey and Barker to give life to an incredibly powerful fictional narrative.

Created as a concept album describing the horror of war, the project seamlessly brings the fictional poetry to life via myriad possibilities of how a forgotten WW1 soldier’s story might open up and continue to be relevant to new generations – from a barely read initial publication of the poetry that came tantalisingly close to being adapted for Weimar era cabaret with the help of German artist, Otto Dix (‘The Kindness of Ravens’, ‘Further Down the Line’, ‘Softly Spoken Bill’), through to the 60s, when Mick Jagger was apparently photographed with a copy of the reprint published by the Parisian underground publishing house which then led to the poetry being discovered by a new generation (‘Listen in the Twilight Breeze’, ‘Poor Poor Surgeon Tim’); then onward to subsequent interpretations of the work by the fictional 80s band, The Moon Lepers on ‘The Expressionist Tell #2’ and ‘Corpse 564’; before finally culminating in the creation of three new pieces by Barker and Harvey (‘I am the Messenger’, ‘The Eternal Black Darkness of my Death’, ‘The Lost Bastard Son of War’).

In addition to Mick Harvey and Christopher Richard Barker, the album features contributions from J.P. Shilo, a long time collaborator of Harvey’s and Jade Imagine, Simon Breed and Alain Johannes as guest vocalists.

The album was recorded primarily in Melbourne, Australia with some additional vocal recordings in the UK and LA.

MICK HARVEY
Mick Harvey is a founding member of The Boys Next Door, The Birthday Party, the Bad Seeds, Crime & The City Solution and The Ministry of Wolves. A long-time collaborator with both Nick Cave and PJ Harvey, his production credits include albums with PJ Harvey and for Robert Forster, Anita Lane, Rowland S. Howard and more. His film soundtrack work includes Chopper (dir. Andrew Dominik, 2000), Australian Rules (dir. Paul Goldman, 2002) and much of this work was collected on Motion Picture Music, released in 2006. Harvey’s departure from the Bad Seeds in 2009 was followed by 2011’s solo album (his fifth solo studio release) Sketches from the Book of the Dead, 2013’s FOUR (Acts of Love) and volumes 3 and 4 of his translations of Serge Gainsbourg (2016’s Delirium Tremens and 2017’s Intoxicated Women).

CHRISTOPHER RICHARD BARKER
After suffering a catastrophic health crisis and then being reanimated by a life-saving organ transplant in 2011, Christopher Richard Barker set about expanding his short story The Melancholy Haunting Of Nicholas Parkes into a 1,500 page novel. Fascinated by the subject of identity – what with having to reconstruct his own – he then created a fictional war poet for the book which in turn led to the musical project, The Fall and Rise of Edgar Bourchier and the Horrors of War. Prior to this series of events he had edited and published the first two collections of short stories by the noted author Reggie Oliver. Further back, he had obtained business management qualifications while working in the civil service, local government and the private sector. He is keenly interested in music, Gothic fiction and C19th supernatural horror, particularly that of a weird and decadent nature.

Press Release from Mute copied and pasted by Ged Babey