Home Music Music Reviews Michelle Leon ‘I Live Inside : Memoirs Of A Babe In Toyland’... 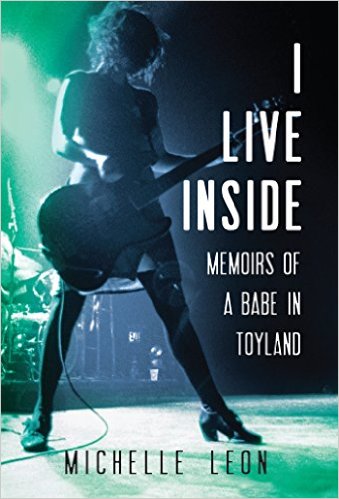 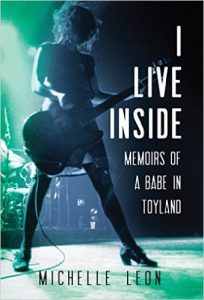 ‘I Live Inside : Memoirs Of A Babe In Toyland’

Being in a band. An intense band and living life in the full glare of a running, open, high decibel wound can be exhilarating and it can be damaging.

Babes In Toyland were something else.

Here was  band who really could scream. Loud.

The Minneapolis band pretty well dragged the template for an all girl band kicking and screaming into the interzone between hardcore and grunge – that interesting period when there were no rules and the major labels were looking the other way and created  fearsome and thrilling racket. Michelle Leon joined them bass just after they started and this book is about her life in the band and beyond.

Somehow Michelle went through the senseless murder of her on/off boyfriend Joe Cole who was shot dead as he returned home from the shops with his best friend Henry Rollins whilst she was away on tour and leaving the band she helped to form Babes In Toyland and came out of the other side. It was a bumpy ride and you can feel the pain.

This book details the hypnotic lure of music and creation and love and life and the helter skelter of relationships cranked to the full white heat glare of constant touring brilliantly. America is big and those relentless tours change people. Those hours in vans travelling from one bar to another are full of outlaw adventure and extremes of geography, human experience and emotion. You get to know people in those long hours. Too well.

On one level this is a rock n roll book but on another it’s book of a life and is a brilliantly written, emotional ride that is sometimes funny and sometimes raw and always beautifully vulnerable and a tell it as it is ride through some life and coming to terms with tragedy and creativity and the vulnerability exposed in the bright glare of the touring machine.

Above all it’s a book about a human being  and the tears and the laughs and the loves and the hates and the lust and the physicality of being human with all its physical and emotional secretions.

Michelle Leon has captured the Babes period and her band’s role in it with keen eye. I Live Inside is partly a brilliantly written account of that decade when touring incessantly in the pre internet USA was the only way to get heard and touring incessantly when bands were genuinely a touch insane and no -one was looking for a career opportunity and the madness of creation was the genuine thrill before the major labels turned it into a grind.

When it comes to rock books the woman have the upper hand. There is no fear of losing face, no uber rock god image to preserve with dull spin, the words flow with the tears, the fragility only enhances the personae with a cutting eye for feeling. As much as Viv Albertine or Brix Smith’s books give you an accurate and perfect depiction of life at the heart of the 1977 UK punk rock scene or the damage of being in The Fall,  Michelle’s book does the same for another vaunted period.

There is humour, pathos and heartbreak in here. The highs are still thrilling and the lows are tearful and the wild nights out are told with their magic intact just like the 48 hour party we had with them when they started and supported my band the Membranes in 1987 just after they started in Madison Wisconsin in 1987 and we ended up fire eating and dancing in the silver moonlight and all sleeping in a huddle on the porch of house and woke up with shocked onlookers at a bus stop looking at the rock n roll carnage. Stuff like that is magical.

Of course there is plenty more of the anecdotal stuff about being in a band- the great war stories from the last great adventure left in these anodyne modern times. The lunatic thrills of playing in a  feisty, thrilling ground breaking rock n roll group and the frustrations of being in near miss band and watching your contemporaries soar sky high. It’s all brilliantly told as it veers from the hilarious to the mundane .

More than anything this a book about a woman’s life – and the highs and the lows of life itself. Rock n roll may have defined this life, it may have been a dominating period that has take a long time to come to terms with but it works as a fascinating and compulsive read through the red raw feelings of living itself.