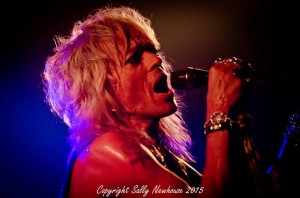 It’s always good to know when you can rely on an artist to put on a show and really ROCK. Or, ‘R.L.F’, as Michael Monroe might say.

I missed first support band, Chase The Ace, but have heard good things about them. Second on, Hardcore Superstar, clearly have a lot of the crowd on their side, but it’s not working for me. They are technically very proficient and aren’t short on energy, but, like most of the audience, I was there first time round, so maybe I expect more. Tunes, in particular. It also seemed odd that a support band should play for an hour. Still, plenty of people liked them.

But we know why we’re here. With his third excellent solo album in a row, ‘Blackout States’, having just been released, Michael Monroe hits the stage determined to give his all. Never expect less than 100% from him and his band; Steve Conte and Rich Jones on guitars, Karl Rockfist on drums and the legendary Sami Yaffa on bass.

Blasting straight into ’78’, it’s hard to believe the last 30 years have passed; he looks and sounds amazing. New songs ‘This Ain’t No Love Song’ and ‘Old Kings Road’ show that he doesn’t have to rely on old tunes, though they will surely arrive. And, after a brutal ‘Trick Of The Wrist’, we are treated to ‘Oriental Beat’. Along the way, the set is peppered with ‘Tragedy’, ‘Malibu Beach Nightmare’ and lost Demolition 23 classics ‘Nothin’s Alright’ and ‘Hammersmith Palais’. The only puzzle is there’s only one song from ‘Horns And Halos’; ‘Ballad Of Lower East Side’, with its huge chorus.

While some of Ginger Wildheart’s writing contributions from ‘Sensory Overdrive’ are highlights, Monroe’s never had a better band. Tight without being too slick, the new album showcases strong songwriting from all the band; a group effort. The aforementioned ‘R.L.F’ will, indeed, have you rocking like flip. ‘Dead, Jail, Or Rock n Roll’ closes the set, before the encore of ‘Nothin’s Alright’ and The Heartbreakers’ ‘I Wanna Be Loved’ sends us back out into Camden on a Thursday that now feels like a Saturday. If someone had told my 15 year old self that he would watch Michael Monroe play a scorching set some 33 years later, I would have wanted to believe them, but, honestly. What were the chances? Sometimes, you have to pinch yourself. 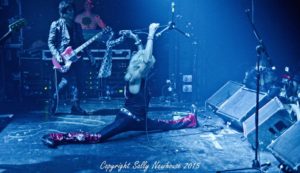 This Ain’t No Love Song

Trick Of The Wrist

Man With No Eyes

Down With The Ship

Up Around The Bend

I Wanna Be Loved