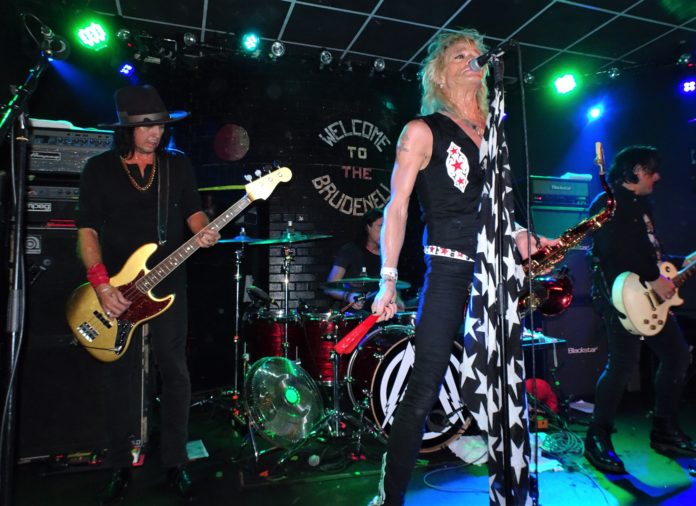 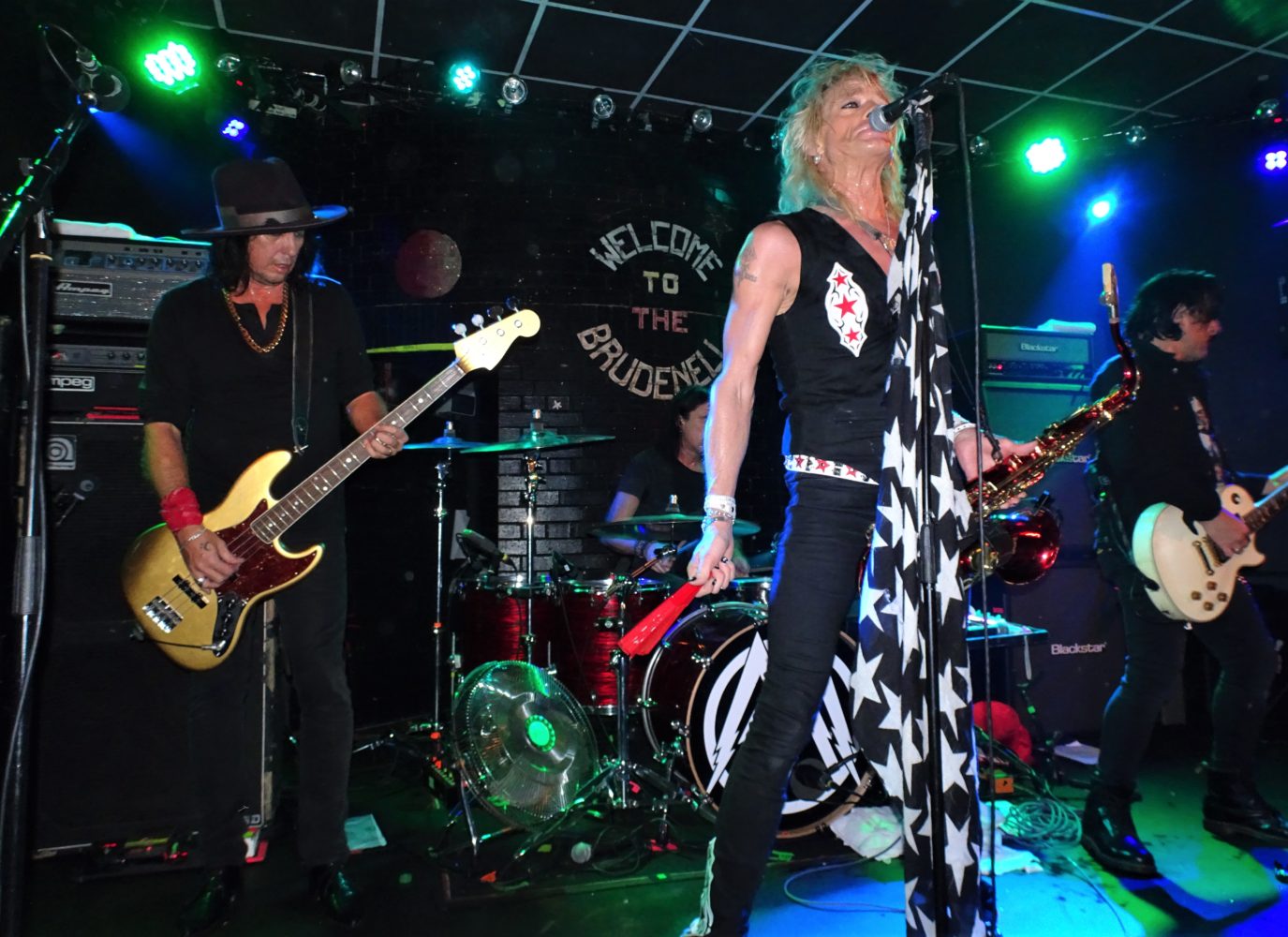 Ian Corbridge joins the One Man Gang as Michael Monroe and his awesome band of musicians storm into Leeds as part of his current European tour promoting their new album.

The impact Michael Monroe has had on the world of rock’n’roll since Hanoi Rocks first burst onto the scene in the early 1980’s should never be underestimated. The fact that Michael has always been one of the most energetic, glamorous and spellbinding performers is also never in doubt. Amongst all this, I also firmly believe that the current membership and pedigree of his band represents possibly the best rock’n’roll band on planet earth right now.

It is also fair to say that Michael, throughout all his various incarnations, has also been one of the most consistent recording artists over a period spanning almost 40 years. The influence of Hanoi in terms of both their songs and live performances has never diminished and this has continued throughout Michael’s post-Hanoi years. As each album comes along you think this could be his pinnacle, until of course that is topped by his subsequent album and on and on it goes. After the rock’n’roll majesty that comprised Blackout States in 2015, One Man Gang immediately builds on that legacy to again reach new heights. So there is no doubt that tonight we are for one helluva ride as Michael and his crew bring the new album and lots, lots more to the sweaty confines of the Brudenell Social Club.

Electric Eel Shock made the journey over from Japan to warm up the proceedings with their 1980’s heavy metal enthused songs. A short yet energetic set which featured significant audience interaction. And the heat clearly got to their drummer who, once his Hanoi Rocks t-shirt was dispensed with, wore only an extremely long sock in a very strategic place to spare all of our blushes.

Michael Monroe’s self-confidence clearly remains in permanent overdrive as he starts the set with a whole batch of songs from the new album. The fearsome drive of the title track, One Man Gang, kicks things off in fine style as Michael immediately prowls the stage looking for the first thing to climb up or hang from. Last Train To Tokyo follows with a trade mark melody and anthemic chorus which immediately brings the assembled crowd together as one in the first of many singalongs. Impressive stuff for an album that has only just been released. It already feels like we have jumped on board a fast moving train and the stomping beat of Junk Planet, courtesy of the magnificent backline of Sami Yaffa and Karl Rockfist, together with the duelling guitars of Steve Conte and Rich Jones, tells me we ain’t getting off anytime soon and that’s just fine by me.

The Pitfalls Of Being An Outsider is simply joyful before we pause only slightly for breath as In The Tall Grass bursts into life with another great chorus, albeit tinged with a sense of mourning for times that have passed us by and people we have lost. So that’s almost half the new album covered and it’s that good no one has even thought about some of the older classics yet – but they will come and we know it.

We do then step back to 2013 with Ballad Of The Lower East Side which depicts the changing landscapes of New York suggesting progress may not always be to everyone’s taste or benefit, certainly in the rock’n’roll world. However as the high level of momentum builds through this song, it all goes quiet very suddenly as it quickly becomes apparent that the amps have gone down and all the power has gone. So not only are the band blowing the roof off but have taken the power off as well. Whilst most of the band head for the bar for some brief respite, Michael, with his boundless energy picks up Karl’s drumsticks and gives us a virtuoso drum solo accompanied by some Ramones style chanting from the crowd, taking me back to the early days of Hanoi when Michael often used to swap with Razzle for the encore to do Blitzkrieg Bop. After about 5 minutes and an additional sax solo from Michael, power is restored and the band finishes the song from where they left off.

Old King’s Road and ’78 are then plundered from 2015’s Blackout States continuing to demonstrate Michael’s undeniable craft in writing classic anthems before the band sharpen their punkier edge with Black Ties And Red Tape from the new album. And then with Michael referencing the undeniable talents of Sami on bass, the iconic bass line that heralds the Hanoi classic Motorvatin’ sends the crowd into a further frenzy.

Hollywood Paranoia off the new album gives us a sense of looking back at what may not have been what it seemed at the time, but with a sense of defiance nonetheless. With barely a moment to spare we head straight into This Ain’t No Love Song, the classic opener on Blackout States with the twin guitar attack in full flow. The brief respite offered from the Hanoi catalogue that is Don’t You Ever Leave Me prompts an always timely reference by Michael to the dear departed Razzle at the end of the song.

As we then hurtle into the triple salvo of classics that close the main set it merely serves to remind us all what a large catalogue of such great rock’n’roll epics Michael has amassed along his magnificent career. Malibu Beach Nightmare and the cover of Creedence’s Up Around The Bend, again from the Hanoi days prompt further mass singalongs from the sweaty crowd with Michael prowling the monitors and Dead, Jail or Rock’n’Roll is as good a set-closer as you will ever find.

The sold-out Leeds crowd will not let it end there of course and the band returns, starting off with the mid tempo rocker from the new album, Low Life In High Places, before turning up the pace for one final push through Nothin’s Alright, Hammersmith Palais – one of my personal favourites from the Demolition 23 era, and finally I Feel Alright. By this stage both Michael and the crowd are all over the place and everyone in the place has a broad grin on their faces with a sense that it just doesn’t get much better than this. 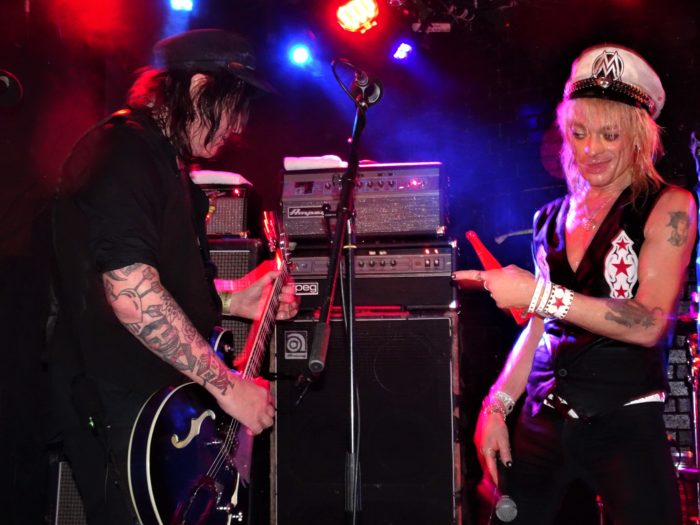 So there we have it, as the juggernaut continues on through the UK leg of the tour with the blond bombshell from Finland at the helm and fuelled by the beating heart of rock’n’roll, we are once again left with the legacy of yet another awesome live performance. Michael Monroe remains as one of the archetypal and greatest frontman of any band in my lifetime and once again the band have taken us on a journey far away from the traumas of everyday life and the mess that is the current economic and political climate. And quite frankly, based on tonight’s outstanding experience, I’m not sure any of us want to return. In the world of rock’n’roll Michael Monroe and his band are the real deal – accept no substitutes.