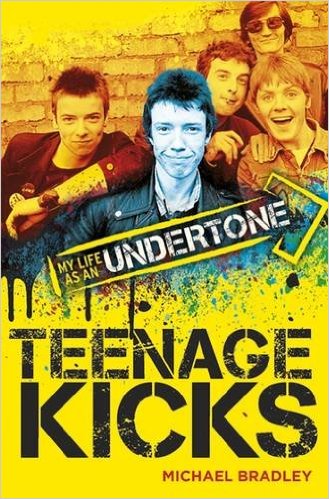 Jamie Havlin reviews a new book by the Undertones bass player Michael Bradley that the author chose to describe on his band’s website as ‘a dark thriller which exposes the corruption at the very heart of our society’.

Okay, Michael Bradley was obviously joking when he came out with that quote but the book’s title and cover gave that away, didn’t it?

It’s now forty years since the Undertones formed and thirty eight since they released the track that’s destined to forever remain synonymous with them, Teenage Kicks, a song that surely still sounds as fresh as it did the day it was recorded in Belfast’s Wizard Studios in the summer of 1978.

Teenage Kicks, the book, tells the story of Michael and his comrades, from their early schoolboy days in Derry, when they started out with a couple of guitars, a mandolin and some bongos, through to their low-key break up in 1983 when singer Feargal Sharkey decided it was time to call it a day.

The Undertones’ initial repertoire comprises of a surprising number of Rolling Stones covers together with tracks like Back in the Night by Dr Feelgood and Sunshine of Your Love by Cream – and I’m still struggling to imagine them ever performing that latter song.

Punk rock then enters the equation and while The Undertones did think of themselves as punk Bradley acknowledges: ‘We were also very far removed from the world of the Roxy club, Sniffin’ Glue fanzine or Malcolm McLaren’s ‘Sex’ shop.’ In fact, one local live appearance is supporting a showband at a Derry community centre where they play Anarchy in the UK to ‘a crowd more used to Shang-A-Lang’.

Before too long they are signed to Terri Hooley’s legendary Good Vibrations label and before they take to the stage at Queen’s University Student Union in Belfast for a Battle of the Bands, Hooley reads out a telegram sent by John Lennon and Yoko Ono from New York wishing everyone all the best for the show.

Bradley still isn’t sure whether the telegram was genuine or not.

In the days after recording Teenage Kicks, he takes on a modestly paid job at a nearby Builders Merchants. When the song is chosen as DJ Peter Powell’s Record of the Week and given a daily airing on his Radio One show, Bradley keeps quiet about his involvement to his co-workers.

Me? I reckon if I had even contributed a single handclap used on a track so utterly thrilling then a significant percentage of each day would have been spent boasting about the fact. Even later, though, at the height of their success, The Undertones undoubtedly remained a modest bunch, keeping their collective Doc Marten clad feet firmly on the ground.

This is how Bradley describes the meeting of the Clash and the Undertones: ‘They looked like sun kissed gods who’d just stepped out of a Marlon Brando movie in order to meet the extras from a Public Information film about the dangers of poor nutrition and bad haircuts.’

Not surprisingly then, if you’re after some salacious gossip with a side order of backstabbing and settling of some old scores then you’re gonna be disappointed. Very disappointed.

As for Mötley Crüe style rock’n’roll debauchery, well there is a night spent with some infamous LA groupies where the band try out a particularly potent cocktail of drugs – okay, I’m kidding on now and I doubt Bradley ever considered using another song title, True Confessions, as the book title even if he does ‘fess up to a pretty sick publicity stunt which I won’t spoil for you.

While many acts spend their time on tour buses emptying bottles of Jack Daniels and vacuuming up lines of coke, Michael and co. work out how many trips to local seaside resort Buncrana that their next drive would equal while the highlight of any journey is when they stop off and troop into motorway service stations to buy an array of chocolate bars and sweets. ‘In appearance we were a band in a minibus on the way to a rock’n’roll show. In our heads we were on a school trip that would continue the next day and the next day and the next.’

Michael does at one point suffer from a debilitating hangover after trying vodka and orange for the first time but this incident was ‘enough to put me off strong drink for the rest of my Undertones career.’

Bad behaviour consists of pilfering some promo LPs from the Sire Records office which are then sold on to Record & Tape Exchange in Notting Hill Gate, a wire coat-hanger fight in a London hotel room and a garden spade is nicked too later and maybe a frozen chicken – yes, this does sound more Father Ted than Led Zeppelin does it not?

Maybe the biggest surprise for me was discovering the Undertones’ connections with the world of contemporary art. Finding out that the band had been pally with Willie Doherty, who went on to be nominated twice for the Turner Prize and gallery curator Declan McGonagle, another Turner Prize nominee, was a bit like finding out that Roxy Music used to drink Coca Cola in restaurants or play Subbuteo together. And for a time cola really was the Undertones’ drink of choice in restaurants.

Throughout the entire book Bradley comes across as a lovely human being, the type of guy that it would be great to meet in a bar and have a drink – or even glass of cola – with. He possesses an admirably conversational writing style and his vividly sketched portrait of the band captures brilliantly the camaraderie and raw enthusiasm of a bunch of working class young men from a troubled part of the world whose unique brand of punk music was truly special.

Not that Michael Bradley would ever likely call it that.

For more on the Undertones check out their official website:  www.theundertones.com