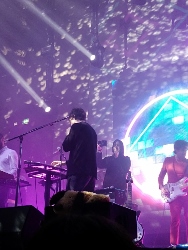 MGMT fill the Manchester crowd with wonder and more than a little love on the final day of their Little Dark Age UK tour. Having never managed to see them live before, Louder Than War’s Roxy Gillespie finally catches up.

MGMT might have once had a reputation for playing what they chose rather than what the crowd expected to hear, but that had obviously not damaged their attractiveness as a live band. The Manchester gig was the last of the tour and was sold out. With many of the younger generation in evidence, it showed this was no nostalgia trip. MGMT continue to be a musical force.

The Albert Hall has an air of slightly faded Victorian glamour, with its circular structure and abundant stained glass. It seemed a fitting venue for such an eclectic and innovative band. With the stage adorned with greenery and substantial amounts of electronica, all that was missing was the musicians.

Matthew Dear took the stage as support providing a mix of deep, sometimes echoing vocals, with backing tracks and his own array of synths. The music was quite experimental and he seemed to have fans in the crowd. With minimalistic guitar adding to the mellow vibe, his alternative sound got the crowd warmed up for the main event.

It is fair to say that when MGMT came on stage the crowd went wild. They started with The Youth, the first of a number of tracks from Oracular Spectacular, showing the crowd were right to get excited. Once the stage was set it was time for a track from the new album Little Dark Age. When You Die, with its ‘Don’t call me nice’ lyrics slotted the exciting new material nicely into an Oracular Spectacular sandwich, completed by Pretend, which pushed the crowd back into an ecstatic frenzy.

Mention needs to be given to the excellent visuals backing the band, which gave an extra dimension to the whole experience and were really atmospheric and beautifully produced. With the excellent James next up, the band forged into less familiar territory. Not that the gig took a downturn. It showed both that their newer material remains strong and the fans are willing to hear and enjoy it. Next up was a track from the Congratulations album, Flash Delirium, MGMT at their eccentric, 60s-influenced best.

Andrew VanWyngarden took the time to chat to the audience, revealing that not only was it the last night of the tour but also Ben Goldwasser’s birthday. Cue a bit of ‘Happy Birthday to You’ action on stage with lots of audience participation. There was also talk of relinquishing a soft-toy dog to the audience, which seemed a pretty popular option. The whole vibe of the gig was incredibly positive. The band seemed really happy to be there and the audience just picked up the love and threw it right back at them.

TSLAMP, another of the relaxed new tracks re-started the music, then Weekend Wars pushed all the right buttons, plunging the crowd into another flurry of dancing. The soft beauty of Siberian Breaks was sublime, then the title track of the new album, Little Dark Age with its 80s pop feel, reminiscent of Pet Shop Boys, changed the tempo yet again. The first bars of Electric Feel sent the crowd wild once more, the pit sending people flying in all directions and everyone singing along. Whilst the newer tracks received a lot of attention, it was clear that Oracular Spectacular still had a special place in the fans’ hearts.

The out-and-out pop ballad Me and Michael saw Andrew snuggling up to the afore-mentioned toy dog, before a girl with pink hair at the front carefully received it. Then the place fairly erupted as Kids began. This was a great gig and this remains a great song. Taking time out in the middle to slot in some great experimental improvised keys added even more kudos. It was a high point and a good time to leave the stage, but the expectant crowd wanted much more.

After a prolonged absence and the intriguing addition of a child’s baby grand piano and little guitars to the stage, the band returned. With Ben, wine glass in hand, at the tiny keyboard, the rest of the band huddled round him. A rubber duck, who we were informed was ‘encore duck, he likes to go crowd surfing’ sat on the little piano making for an even stranger scene. All became apparent when the band launched into When You’re Small as their first encore. The songs continued as the band returned to their more conventional instruments, with crowd pleasers Pieces Of What and Of Moons, Birds and Monsters. To finish the night off, they treated the crowd to Hand It Over. This was a hell of a gig and the audience obviously didn’t want it to end. As the taped music came on and most of the band left the stage, waving as they went, Guitarist James Richardson and Bassist Simon O’Connor graced the audience with some fine and funky dancing, especially the gangsta-style moves from Richardson, making a fun end to the gig.

Perhaps it was last gig of the tour euphoria or just that the audience were just so happy to be there, but this was a gig that felt personal. An excellent night from an excellent band.