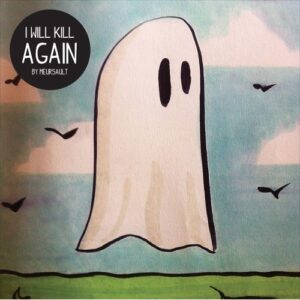 Meursault – I Will Kill Again (Song, By Toad)
CD/LP/DL
Out now

Louder than War’s Ioan Humphreys has a listen to Meursault’s sublime and life affirming latest album.

In 2008 Meursault released their hugely acclaimed debut Pissing On Bonfires/Kissing with Tongues. Since then there have been three more albums, two singles and an EP. Finally, after a break sowing his seeds in other Song, by Toad releases, Meursault are back in business with a new line up and a new album called I Will Kill Again.

The album starts with a gentle beautiful piano and violin duel which culminates with a eerie and disturbing electronic voice at the end declaring ‘I will kill again’. I am presumptuously assuming that the title of the album is taken from the Jarvis Cocker song of the same name.  Either way, it’s a great name for an album!

Second track Ellis Be Damned has a gentle guitar, but BIG pained vocals singing ‘you look stupid when you cry’. The Mill opens with a nice gentle riff with gorgeous chord changes and added orchestration on top of the vulnerable vocals. The track comes to an emotional and tumultuous end.

The gloriously titled Ode to Gremlin has haunted vocals over gentle strumming. With more vocal overdubs and intonation. The piano adds to the heartbreak. This is one of the stand out tracks with THAT voice.

As the 10 track album progresses, the experimental sounds, simple piano and vocal manipulator on Klopfgeist show the range of this band. The lo-fi, but euphoric tune Oh, Sarah has a really nice Daniel Johnston feel to it with its ‘happy’ piano.

Belle Amie has an almost Americana feel to it with its lo-fi, but pained vocals and big dramatic noisy end. Gone Etc… utilises field recordings with piano and vocals that sound miles away. There is an incredible beauty created with this type of recording.

Final track A Walk In The Park is almost like a primed canvas by which Pennycock can paint his gentle vocals along with more of the quiet and gentle piano and violin.

The overall feeling you get when you listen to this relatively short album is one of absolute beauty. It has a life affirming feel to it that resonate long after the final track. It’s a very welcome return from Meursault and expect to see and hear more from this band in the coming months. Just great stuff.