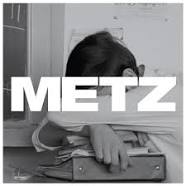 With a brilliant new album soon to drop on Sub Pop Metz popped into London to give us a taster of some of those new songs.

It’s easy to make a brutal racket and play at a volume that threatens to punch an audience’s teeth down their throats, but it’s a lot harder to turn this sonic duffing into something cathartic and compelling, and Toronto’s METZ have this trick nailed.

Shortly before they unleash their thrilling sonic weaponry, Discharge’s ‘Ain’t No Feeble Bastard’ blasts over the PA, as if issuing a warning of what’s ahead. But if anything, the Canadian noise trio make Stoke’s hardcore punk legends sound like softies. With METZ there is no quiet bit/loud bit formula; in their world, nuance is for wimps. Everything is cranked up and played at full-pelt, delivered with punishing intensity.

And yet, as tumbling pile ups like ‘Headache’ and ‘Rats’ send the 100 Club into a frenzy, the aural punishment is meted out with enough twists and turns to keep us gripped, an ultra-heavy riff will stop abruptly as if balanced on the edge of a sheer drop before lurching back into life, leaving your stomach behind; or guitarist Alex will bend his strings amidst the racket until you’re not sure if your ears are playing tricks, but it’s all part of the tumultuous brew. In fact, METZ are awesomely tight, as is most evident in the spitting, hissing ‘Wet Blanket’, where the sound dissolves into a tense percussive breakdown only for drummer Hayden to hammer back in with jaw-dropping precision, finally sending us over the edge into a chasm of hardcore carnage.

New song ‘Acetate’ cranks up the levels to new heights, the guitar urgent like a siren, Chris’s bass unforgiving, relentless, locking everything down. At times METZ sound like industrial machinery spinning out of control, sparks flying, metal grinding, an elemental grunge machine that in many ways resembles ‘Bleach’-era Nirvana, but with Kurt’s pop instincts purged and just the core anger left behind.

And then ‘You’re Wasted’ mutates into an extended blast of drums and feedback, leaving you breathless, until at last the guitar fizzes back into life and explodes, transforming the 100 Club into a forest of upturned feet, surfing bodies and euphoric grins.

METZ are brilliant but terrifying, like an awe-inspiring violent force of nature. Not for the faint hearted.