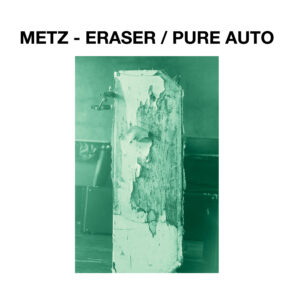 Metz released their solid sophomore album II back in May and their new single keeps in line with the band’s commitment to their signature sound and making things incrementally messier each time around.

Metz refuse to mellow out like a bunch of wusses and thank goodness for that. The Toronto band stick to their guns and their word, having kept their promise to release new material much sooner than they did after the explosive success and extensive touring that followed their self-titled debut back in 2012. They have managed to give it their all both touring and writing this time around (this release comes sandwiched between dates and more dates – including some in Australia and New Zealand). They’ve gone with their gut and created something rawer than previous outputs.

On “Eraser” throws of drum introduce the track and when everything meets up front there’s a moment of 90s alt rock nostalgia, with the core offering a bit of unconventional grooviness . Then enters Hudson’s dissonant, disembodied voice. The chorus is thrashier with more pronounced dual vocals than on previous Metz releases, before a long (by Metz standards) soak of an interlude. Things hang here even more pronounced than on tracks on II, before lurching back into the chorus which is pretty much everything a noise rock fan wants one to be – making you want to turn it up while your ears plead with you to turn it back down.

“Pure Auto” comes in with the sound of screeching metal on metal, before erupting into chaos, feeling very much like a combination of their two previous albums, with a particularly discordant clashing of chords on the chorus. This single feels a lot like the band finding a way to crash the fast-pace on their debut into the more drawn out darkness on II, making it both more erratic and meandering at the same time.

Metz continue to destroy with their pummeling sound. These tracks revel in ugliness and read like a love letter to disarray. As far as what Metz produce, there’s a bit less of a sense of conscious intent. It’s heaving and messy like it’s  supposed to be, sinking a bit deeper into the abyss of madness.

Metz’s page on Sub Pop’s site is here: subpop.com/artists/metz and their Tumblr is here: www.metzztem.tumblr.com.