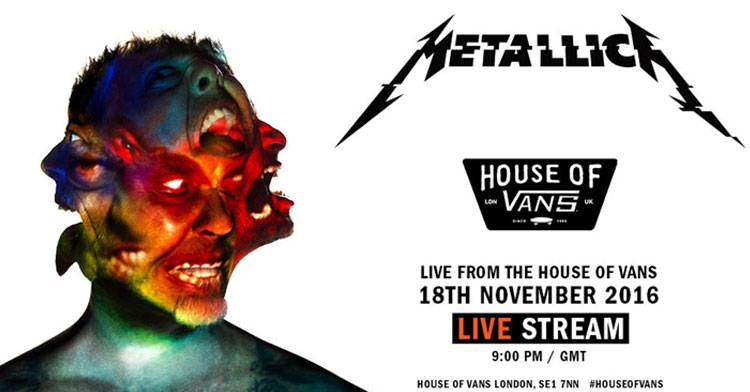 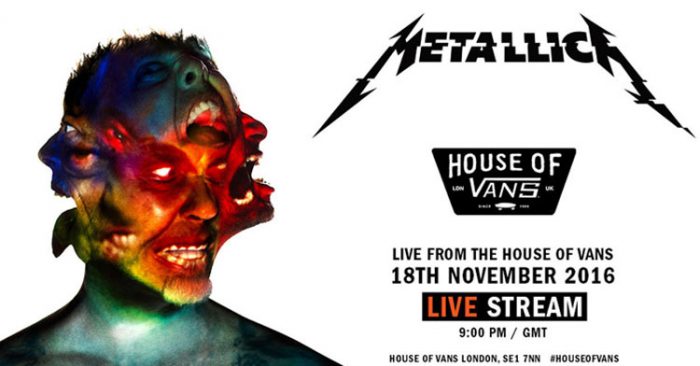 Metallica introduced their latest album, ‘Hardwired…To Self-Destruct’, at the iconic, and intimate House of Vans underneath Waterloo station. Being a Metallica fan for over 20 years, and pretty much knowing every word of every song (barring St Anger), it’s safe to say I’d lost both my hearing and the use of my voice by the end of the night.

Having only seen them at festivals and larger venues, I knew this exclusive gig was going to be different. There are normally a good few thousand people between me the stage, but tonight I was a mere stone throw away.  For me, this was the most unique gig I had encountered – excited was an understatement.

It’s been eight years since Metallica’s last record, Death Magnetic, and this year sees the release of their latest album. They celebrated the “the birth of Hardwired” (as Lars put it), at the immensely atmospheric House of Vans, nestled in the arches under Waterloo station. This was the album release date which many fans had been waiting patiently for, and how privileged we were that London was the chosen city to celebrate it in. Having a band built for stadiums and huge arenas play to a small crowd was something I never thought I would experience, and it’s probably safe to say this review will be horrendously biased.

I arrived at Waterloo, and made my way around the back of the station. Meandering through a graffitied tunnel, I knew I was in the right place when I saw the crowd gathering outside some railway arches, and heard Symphony of Destruction by Megadeth blasting through some hidden speakers. I joined the queue and tried not to make eye contact with the hopeful people walking past, begging to be anyone’s ‘plus one’ for the night, or to swap my ticket for an Opeth gig the following night at Wembley.

After some tight security and photo ID confirmation, I finally made it in. All attendees of the night were asked to make a £20 donation to the Railway Children charity, who help children who are alone and at risk in India, East Africa and the UK (www.railwaychildren.org.uk). The mood inside was buoyant, I was asked to pose for photos, along with 30 or so other random people. The walls inside were awash with hardwired projections, and people seemed to think the queue for the cloakroom was the queue for the bar. I decided to bypass this, going straight for the pale ale, and then for some reason I chose to stand right next to a bin as the perfect place to watch the band.

And so it began! The metal gods entered the stage without the customary Ecstasy of Gold and blasted straight into one of their Garage Inc covers Breadfan. A sea of phones and iPads suddenly blocked everyone’s view. It seems bizarre that at a gig, which is being streamed live, people would still feel the need to do this.  I actually saw someone record a whole song and then immediately upload to Instagram, good job there was free wifi.

It was one of the best collections of opening songs they have chosen with for a while, unleashing The Four Horsemen second, causing the crowd to bounce up and down. I immediately regretted not queuing for the cloakroom as I was now drenched in sweat, I actually had thoughts about balancing my belongings and coat over the bin I’d been standing next to.

With no break or even a word to the crowd spoken, they ploughed straight into Battery. Hetfield did his usual cry to the crowd “how does it feel to be alive?…show me!” routine, followed by Kirk Hammett’s solo, suggesting the cue for the crowd to go manic. “What an opening three songs”, Hetfield proclaimed, and yes, I agreed.

The ultra-heavy Sad but True was next.  The sound was fantastic, the bass drum vibrated through the whole venue.  It was probably the first time I’ve seen them where bassist Robert Trujillo was truly noticeable. His bass was loud and powerful in this small setting and the band sounded all the better for it.

Kirk then decided to do his ‘Kirk doodle’, which I think was a cue for the crowd to go to the bar or find a toilet, because I have never found it in any way satisfying. But in all actuality, it was more so that the stagehands could set up Hetfield’s acoustic guitar for the next song Fade to Black.

Of course, with the promotion a new album, we couldn’t expect them to just play the old stuff to please the masses. Atlas Rise!, the third single from the new album was next. Having listened to this song on repeat during the weeks after its release, it settled well into their set list with its amazingly heavy mid-section riff and harmonised guitars. This led nicely into Harvester of Sorrow off the …And Justice for All album, and the catchy new song Moth into Flame.

The next four songs One,  Master of Puppets, For Whom the Bell Tolls and Enter Sandman represented the four albums which made me, and so many other fans, fall in love with this band. This is not to say anything they did later was bad (Load and Reload I still regularly listen too), but these songs show the best of Metallica. Fast drumming, fast shredding, catchy melodies and powerful riffs. They must have played these songs so many times, but they still appear in almost every set they play. It was during For Whom the Bell Tolls that a man in front of me, obviously very excited, kept turning around to high five everyone. I’m glad most of the people at the gig, who had won the ballot, were true fans and were truly loving this experience.

The band rushed off stage, insinuating that this glorious night had come to an end, and a few uninformed people made way for the exit, but of course there would be an encore. After a chorus of chants they come back out, a ‘surprise’ to all. “I am really looking forward to this one” Hetfield tells the crowd, striking up Whiskey in the Jar. Everyone is singing along, I had finally lost my voice by this point and my legs and neck were starting to ache. Could I use the bin as a seat? No. Hardwired, the lead single from the new album played out, a throwback thrash song that could have been on their first album Kill ‘em All, James screams “we’re so fucked”, yes James, I am (and probably Lars too).

Ending on a high note, they played the inevitable Seek and Destroy. I half expected the massive Metallica balls (the inflatable kind), that are thrown out at their bigger concerts to appear, but it was probably wise not to as I think this would have been absolute carnage in the enclosed, tiny venue. The night ended with Hammett getting the traditional pie in the face as a birthday surprise from his fellow band members, much to the crowd’s amusement.

Lars signed off the night by praising the UK fans, their support throughout the years and he couldn’t think of a better place to give birth to ‘Hardwired… to Self Destruct’ than in London. He also announced their 2017 world tour.

Will I be there? Hell yes.