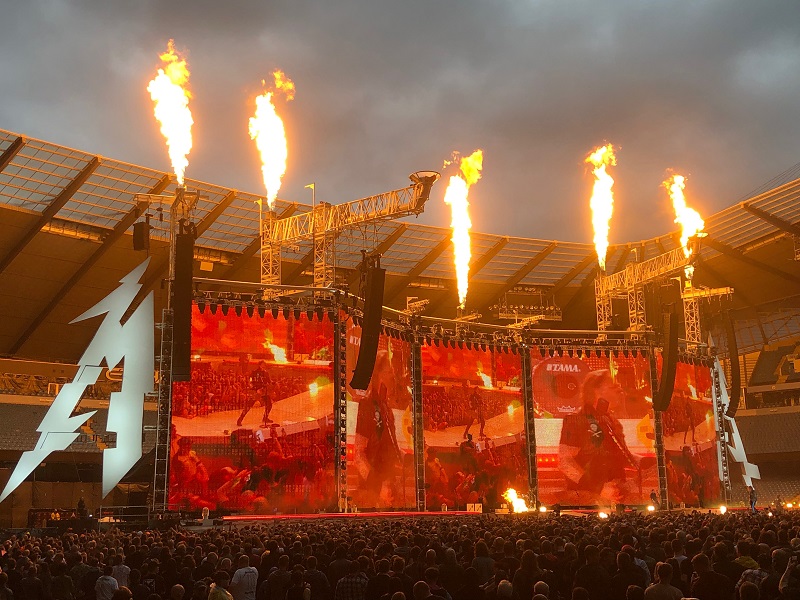 San Francisco’s metal titans brought the latest leg of their tour in support of Hardwired…To Self-Destruct back to Manchester for a victory lap. Following on from 2017’s tech-savvy arena jaunt, this summer jaunt feels more stripped back. Just a huge screen with HD visuals and the mandatory pyro flanked the band.

Opening with the title track of their 2016 album, the band rifled straight into a glut of older tracks including the massive Memory Remains, complete with Marianne Faithful vocal and a 60.000 strong choir of fans.

“You look beautiful!” proclaims James Hetfield for the first of many compliments towards this wonderful city. God That Failed and Unforgiven from 1991’s mega-selling ‘Black’ album both allowed the band to warm up and ease into their repertoire. Kirk Hammett stalked the catwalk complete with glittery pink/purple Converse trainers with his nails adorned with black nail polish. Rob Trujillo complements Hammett perfectly as they goaded the crowd with their timeless playing. Their ‘doodle’ section broke down into a cover of Stone Roses I Wanna Be Adored. Some people loved it, and some people probably had no idea what it was; still, it sounded great.

Hetfield continued to compliment the Metallica ‘famileh!’ “We’re here to have fun,” he hollers as Here Comes Revenge is lifted from Hardwired with Hetfield in the centre of the stadium with the ever increasing heavy rain. Moth Into Flamed completed a brace of newer tracks with the latter being one of Metallica’s strongest songs in years. More thank you’s followed; “Looking at faces that f+cking love music…thank you from the band and crew – you pay good money and it’s appreciated.”

The band got heavy(er) with Sad But True (backed by some awesome visuals) and another nod towards Master of Puppets with Welcome Home (Sanitarium). This led nicely into Rob Trujillo playing solo bass in the unwavering downpour as images of the sadly departed Cliff Burton were projected to the masses.

Surprisingly, St Anger was aired which is from the album probably polarises most Metallica fans. The video to this single was really cool, and on this more than damp night, it sounded good. It was a nice curveball from a band that has never been afraid to mix things up. It felt a little flat for some (with some punters just taking a seat or a trip to the lavatory).

If anything, the punters choice of a break was probably needed as from here on in, Metallica showcased why they’re one of the biggest bands in the world. One, Master of Puppets, Creeping Death, For Whom The Bell Tolls and Seek & Destroy, back to back, was an unbelievable run of songs. The bombast of One with pyro for days, the march of For Whom The Bell Tolls and the bands signature in Seek & Destroy wowed the audience and ensured that the rain did nothing to dampen spirits. The band looked like they loved every second on stage in the rainy city. Seek & Destroy saw the band all out in the centre, including Lars, who could be seen on the screens hitting his drums through puddles of rain forming on his skins.

The encore opened with a forgettable Lords Of Summer before the monster hits, Nothing Else Matters and Enter Sandman. Images of the Union Jack, James’ unique Manchester guitar picks and more pyro polished off a solid night at the office for Metallica. The driving rain made for a special atmosphere; one that you rarely find in stadium shows. The determination of the four gentlemen with the biggest of metal songs drove on the crowd and the energy to deliver a real spectacle that was not reliant on stadium show gimmicks.

Metallica should also be commended for their continued philanthropy. Prior to the show, the band offered a donation of £40,000 to a local charity, Coffee4Craig as part of their All Within My Hands foundation. Photos, videos and setlist information can be found here.