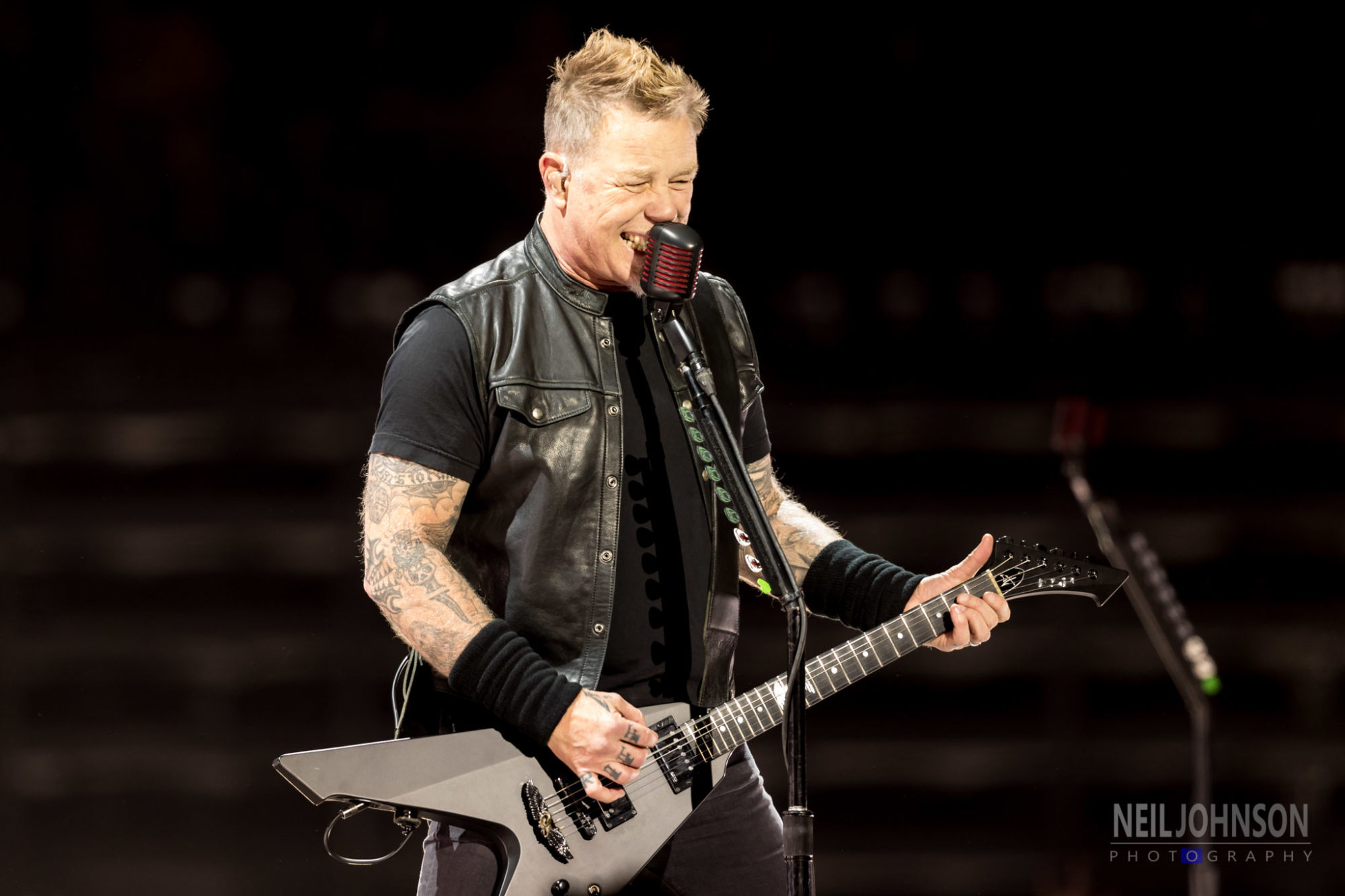 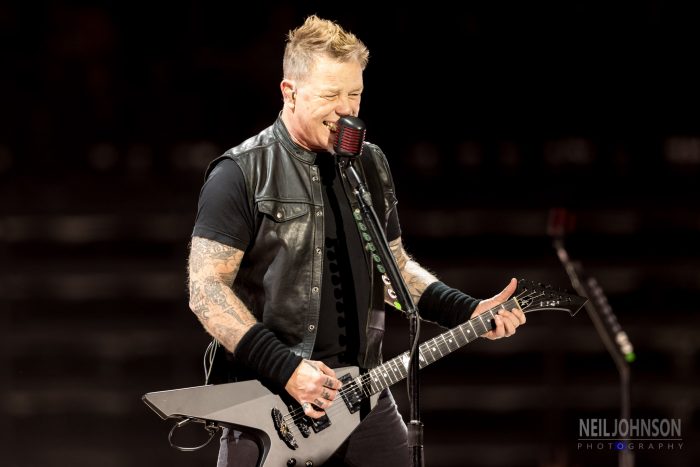 Thirty-six years later and Metallica are still here. Not content with clinging on to their former glory by their fingernails like so many other bands of the same era, they have grabbed hold of it, locked their jaws on it and are running around the world with it like an angry dog.  Metallica today has a new lease of life and energy after the therapy that was St Anger. Neil Johnson goes to the Genting Arena to see the gods of metal performing to the Birmingham crowd.

It’s been eight years since Metallica last played in Birmingham back in 2009 on the World Magnetic tour and thirty-one years since they first played in Birmingham at the Odeon in 1986, for those that can remember that far back! The passion from the queues of people waiting to enter the Genting arena is extraordinary, I can hear small crowds talking about their first and most recent times seeing Metallica. It’s almost, no not almost, it is a definite badge of honour to have seen them live. But then, Metallica are no ordinary metal band, they forged the genre into what it is today, never afraid to experiment and never ones to shy away from doing things their own way. Above all else, Metallica is a band that has stayed true to themselves, not just a poor echo of the people they used to be back in 1986, but changing their style and approach as life has changed them. Metallica fans have gone on that journey along with them. James Hetfield famously welcomes first-timers at a Metallica gig into ‘the family’ and that’s how Metallica feel to many of the fans here, family. 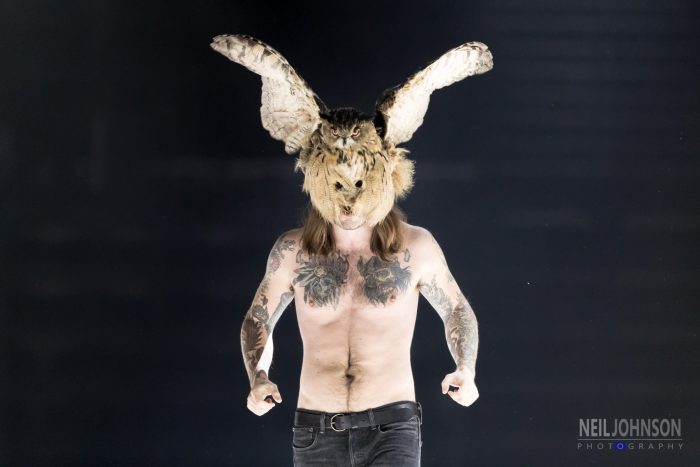 Tonight’s support is Kvelertak, a Norwegian heavy metal band that I’m ashamed to say that I hadn’t heard of before they were announced as support. As you might expect, they seemed a pretty happy bunch as they came out onto the round stage in the middle of the Genting Arena in front of fifteen thousand metal fans. Their blend of heavy grooves and punk influences made for a livening starter. Their track 1985 was especially noteworthy, huge metal riffs made even larger by the Genting Arena’s monster sound rig! Oh and the owl, because according to legend Erlend (Vocals) was raised by owls!

The stage rig is changed over quickly and without much fuss, while they do I take a look around at the sound desk which is where we are photographing from tonight. I count twenty-eight people and thirty-nine computers, the technology and effort behind tonight’s show is significant. This isn’t just heavy metal on a large sound system, it’s a show of epic proportions, volume and light.

As seems to be customary these days, the band come onto the stage to the Ecstasy of Gold and then dive into Hardwired. The sound guys that I watched earlier had obviously been twiddling things because the sound was just stunning, clean, tight and dynamic. Even the powercut through One  didn’t knock the band off pace. Each instrument carved out clearly and perfectly balanced. As James screams “Hardwired to self-destruct” the crowd scream along, we’re two minutes into the gig and it’s clear that Metallica are on top form, energetic and as tight as any band I’ve ever seen. 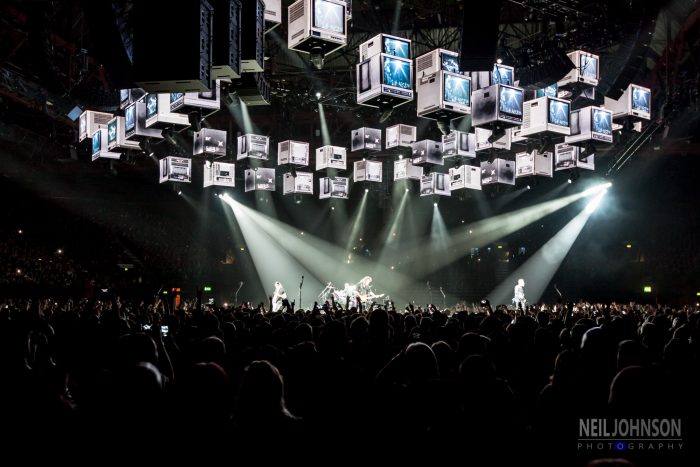 They move on through Atlas, Rise! and then onto Seek and Destroy. I have earplugs in and I can hear the guys standing in front of me screaming their hearts out to every single word as if it was going to be their last. The energetic onslaught continues with The Shortest Straw before the pace slows a little with Sanitarium, It felt as if every single one of the fifteen thousand people in the Genting arena knew every single word, “No more can they keep us in, Listen, damn it, we will win, They see it right, they see it well, But they think this saves us from our hell” rings through the arena. Moving on to Now That We’re Dead and an extended drum solo in which the whole band take part.

The setlist for the show is a great mixture of the old and new, thankfully skipping most of the dreary radio-friendly fluff from the nineties records. I’m am happy to forgive them closing with Enter Sandman, especially since they played the Frayed Ends of Sanity as the outtro which is one of my absolute favourites and I was more than a little disappointed that it didn’t get a run out in the main set.

Overall the show was exactly what you would expect from one of the worlds most successful bands. The production was exquisite, the band were on top form both in terms of playing and interacting with the crowd. James is a true entertainer when he is on form and tonight he was charismatic, cheeky and playful. Listening to people talking on the way out it was clear that I wasn’t the only one to enjoy the show, everyone was buzzing. Even the powercut through One seemed didn’t knock the band off pace, Lars just kept playing without any amplification for his kit and James entertained the crowd the best he could whilst the sound guys frantically switched things off and back on again.

At close to £80 a ticket this is an expensive show, especially when you consider that I paid £10 to see them back in the 80’s! but tonight’s show is exactly that, it’s an event, something to remember and for that the price seems pretty fair.

Highlights of the show for me were Seek and Destroy which is such a crowd pleaser, Sanitarium and Moth into Flame which James dedicated to Amy Winehouse. They also had cool drone-moth-things that flew around the stage during the song, which was really cool to watch. I also have to mention the Black Sabbath War Pigs cover that they did after Halo on Fire, they obviously know the Birmingham audience well! The top two for me though were One and Master of Puppets.

As I left, I did wonder if we will see these guys in Birmingham again or if this might be the last show? I hope they come back.