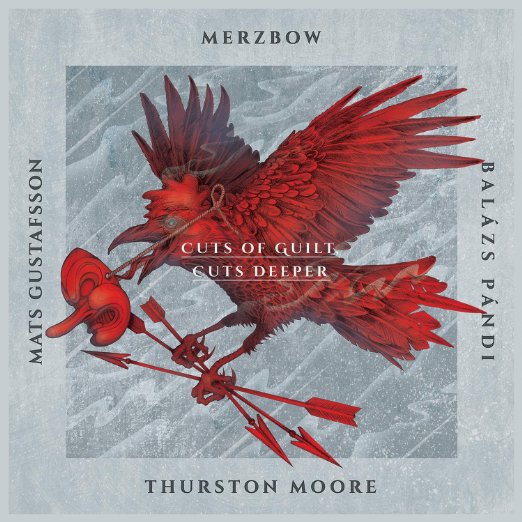 ‘Cuts of Guilt, Cuts Deeper’ the second Cuts project, the follow up to the mind expanding ‘Cuts’ from early 2013; however the trio of Japanese noise purveyor Masami Akita (aka Merzbow), Hungarian drummer Balazs Pandi and Swedish saxophonist Mats Gustasfsson, have been joined by Sonic Youth founder Thurston Moore which should ramp up the intensity to previously unimaginable levels!

In 1952 John Cage crafted his composition “4′33″ – for Cage “4’ 33” was the epitome of his theory that any sounds may constitute music; bear that in mind should you happen across this expansive four part composition, which drummer Pandi himself describes as a “mystery in sound”.

Disc One is comprised of the 20min ‘Replaced By Shame – Only Two Left’ and the 18min ‘Divided By Steel, Falling Gracefully’…a body of work of these proportions demands your attention; set aside a good two hour session, crank the volume up and press play. ‘Replaced By Shame – Only Two Left’ begins with subdued electronic scratching’s, the sounds of whirring machinery almost organically developing, a distant rumble of thunder, shards of savage guitar that almost evoke a pained voice , and a truly tortured g clarinet, otherwise known as a Turkish clarinet; for a point of easy reference think of the section in Ian Dury’s ‘Hit Me With Your Rhythm Stick’ – Davey Payne plays two saxophones simultaneously; at the very apex of the squeal that he produces – that’s the entry point for Gustassfson, as he competes with Pandi’s throbbing beats and Merzbow’s deeply unsettling white noise; the entire composition building further in intensity; the pace itself doesn’t particularly quicken, just the frequency of the various layers of attack, constantly shifting; this I suspect could be similar to the condition of Synaesthesia ‘mixed sensations’ – the recipient receives stimulus in one sensory modality e.g. hearing which involuntarily elicits a sensation/experience in another modality e.g. sight so sound becomes colour, that being the case this entire album is an explosive kaleidoscope, a blazing swatch of lurid colour, some 10min in the track breaks down – a moment to draw breath before the sonic pummelling continues unabated, as uncomfortable as it is it becomes strangely hypnotic, there are no melodies but patterns do emerge, and you find yourself subconsciously digging deeper into the malaise, fixing on a particular sound and following its transition, a guide through the maze of squall.

Gustassfson described the improvised recording “We had no game plan…it all depends on the day, the energy…just a wall of noise-poetry” – ‘Divided By Steel, Falling Gracefully’ continues in similar vein, a collision of pure energy; despite the technology of the instrumentation this is almost primeval, I’d spent the night before watching a documentary about the Voyager 2 space probe, at some point in its near 40yr journey away from earth it captured the actual sounds of radiation emanating from Jupiter, Merzbow | Pandi | Gustassfson | Moore have brought those sounds home – this is particularly brutal, Merzbow ramping up the waves of distortion, Moore violently manipulating his guitar, the sounds of heavy industry, of tectonic plate shifts…unrelenting to the point of exhaustion, but at no point did I hit the pause button – the sound of masochism?

Disc two begins with ‘Too Late, Too Sharp – It Is Over’ – barely audible noises, found sounds, similar to a wind chime, in the background bursts of electronic noise, deep in the mix, guitar screeches, splintering glass, and rumbling drum refrains; it’s almost meditative but over the course of an epic 21min journey the intensity continues to build; that’s part of the beauty of this entire piece of work – the entire recording is an exercise in improvisation, the three musicians and Merzbow who does not considering himself as such have free reign, there are no time limits, no constraints – nothing, absolutely nothing is off limits, each instrument blends with another into a truly apocalyptic primal scream. The later 5min of the piece is perhaps the most accessible, it’s expansive – sounding like a seriously disturbed reimagining of Vangelis’ Bladerunner.

Closing with ‘All His Teeth In Hand, Asking Her Once More’ is a masterstroke – sheets of misdirected noise, a genuinely terrifying wall of noise that wraps you in mesmeric confinement; this is the sound of everything you know falling apart, your life shredding away…slowly piece by piece.

Replaced By Shame, Only Two Left
Divided By Steel, Falling Gracefully;
Too Late, Too Sharp – It Is Over
All His Teeth In Hand, Asking Her Once More