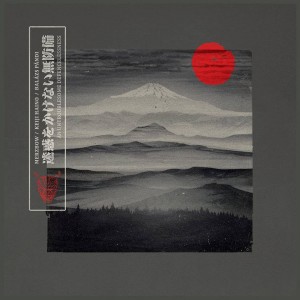 Another Merzbow associated release for RareNoise Records, and once again it’s a collaborative piece – this time noise maestro Merzbow joins forces with Hungarian drummer Balazas Pandi, and fellow countryman Keijo Haino for a further journey into sonic experimentation; Merzbow and Pandi having previously collaborated on two earlier RareNoise releases (‘Cuts’ in 2013, ‘Cuts of Guilt, Cuts Deeper’ in 2015), the addition of Haino, a renowned noise guitarist and improv vocalist taking the sound into ever deeper and darker recesses of their collective psyche – if what they have produced is a reflection then this trio are currently occupying locations the majority daren’t even imagine!

The album is effectively two absorbing suites divided into individual movements; opening with the chaotic ‘Why Is The Courtesy Of The Prey Always Confused With The Courtesy Of The Hunters…(Part I)’ the title of which I suggest is an adaptation of the Haitian proverb “Day For the Hunter, Day for the Prey”, the piece builds (un)rhythmically around complex free jazz drum refrains, taut slashes of guitar, and beneath this are the typically scorched earth electronics of Merzbow crafting cavernous noise and high end squall over which Haino has free reign to offer up apparent plucked noise – this guitar is not gently weeping, its screeching out its final death throes; tracks 2 and 3 bear the same title, only being identified by the additions of Part II, and Part III monikers.

‘Part II’ spread across a daunting 10mins and across three distinct phases is perhaps more patterned, initially Merzbow coming more the fore – Pandi responding generously, at times quite atmospheric, an eerie presence, during the later stages Haino even produces some almost recognisable guitar work…’Part III’ – another extended piece that builds ominously, its cloying, wrapping you in tightening darkness, flashes of light break through; this is the most listenable piece – the expected Merzbow assault being switched in favour of blackened pulses and textures.

It’s a style that continues across the four pieces of second movement ‘How Differ The Instructions On The Left From The Instructions On The Right?’ Space seems to be the key, space for Merzbow, Pandi, and Haino to first create and to then collectively occupy, each performer reacting accordingly to the other and the textures they are creating; there is no explanation within the sleeve notes as to the structure of each composition, but such is the free reign each performer clearly has and exercises I suggest it’s safe to assume that none of this was written in advance, rehearsed or notated.

‘Part VI’ is the only piece that features vocals, heavily accented, strained, command like barbs over more traditional Merzbow noise – charred vibrato electronics, semi-rhythmic, animal like rumbles, the entire piece concludes with ‘Part VII’ builds upon its predecessor and evolves from Pandi’s unstructured drum patterns, Merzbow laying down seemingly apocalyptic foundations which are then flecked with shards of solar colour, at times the sounds he creates resemble those produced by a primitive trumpet made from the hollowed-out horn or shell of an animal adding a further organic feel to the walls of electronic noise that underpins this entire work.

An intense, deeply unsettling, even un-nerving recording that the vast majority would consider unlistenable; persist with it – prepare for the listening experience, this is not background music, this is not music, but within blast furnace of sound there are enough strands to allow the more determined listener to understand the journey Merzbow / Haino / Pandi are taking.