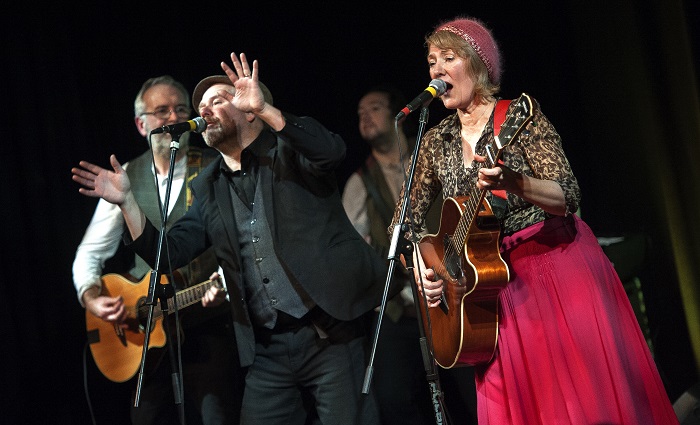 MERRY HELL, HARP AND A MONKEY

At last a box ticked off. Seeing Merry Hell live has been on the ‘to do’ list for a while.

Disgraceful really that although we’ve done our best to support their album releases, there’s been no Louder presence at a MH gig, particularly when the band are so local to many of us in the North West and the fact that  they have such a worthy a gig ethic. However, it has been alluded that the latter may  be something to do with the fact that it doesn’t give Andrew Kettle enough time to forget the words to the songs…their comment, not ours. It may also be apt to hijack the ‘best thing to come out of Wigan since…’ and add your own interpretation here although it may involve George Formby, Richard Ashcroft  or  some sort of pie.

However, first up as a real bonus were Harp And A Monkey and a  pleasure it was too, to see them too after several encounters in the past and them being under my personal radar for a short while. For the uninitiated, yes there is a harp, but no monkey as the trio of Northern Folk experimentalists treated us to a musical journey that took in  a host  of Lancashire stories, songs and traditions as the core. Refreshing too to hear the dialect driven Bolton’s Yard referring to the town as ‘Bou’ton’ which takes me back to elderly relatives who always used the term. It’s a theme the headliners return to with the cold/cowd leading into a bizarre series of ‘cow’ed’ bovine references. Peter Kay eat your heart out. 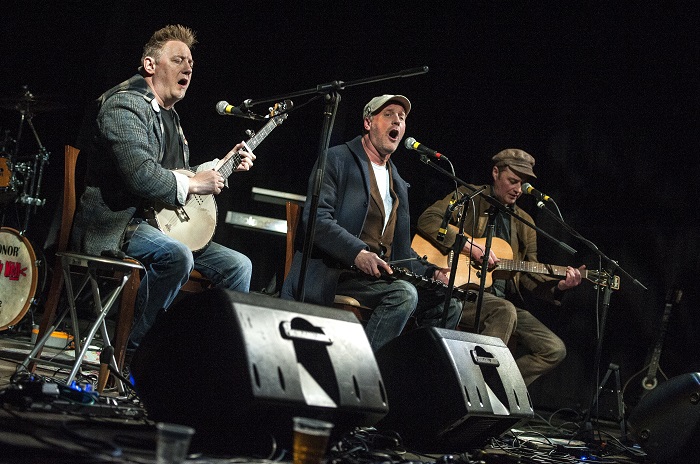 The H&AM  sound revolves around the distinctive glockenspiel plus banjo, guitar and electronic rhythms; one that inspired the Katy’s Twinkly Band song, but certainly a good time to revisit a couple of their albums that are sat on my shelves and dip into a fascinating insight into Lancashire ‘stuff’.

The full electric eight piece Merry Hell – there are also stripped back acoustic  and acousitic-ish versions (you can catch a performance at Over Hulton Folk Club in Bolton on 6th Feb) – trooped on for their first gig of the year and first in seven weeks. No real hint of rustiness to these ears in their jamboree filled set. 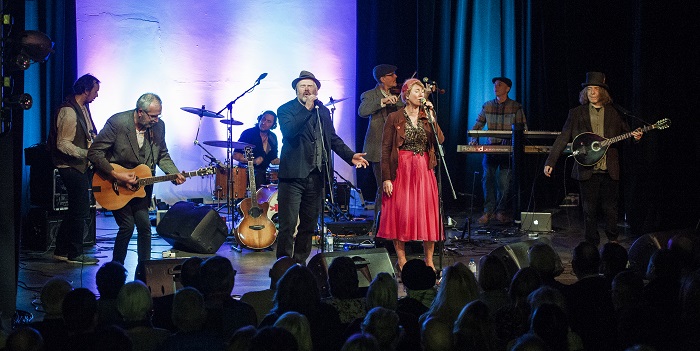 Fronted by a row of four of the Kettle family, there was more than a hint of relaxed humour, plenty of hey’ups and ne’then’s and I have to say that on first viewing, surely I can’t have been the only one to be  struck by  Andrew Kettle  rocking a ‘Karl Pilkington in a hat’ look. Like Merry Hell musical chairs, watching the eight become six as drums and keyboards took a break, and then switching to five solo voices around a couple of mics before Virginia Kettle’s solo spot, they provide a fresh alternative to the often too serious for their own good folk audience, even for a seated show.

Their well established set pieces came in the form of the rousing anthem Come On England, emitting laser beam rays of positive vibes; We Need Each Other Now (enough said) and there’s a highly anticipated and expected sway along to Bury Me Naked.  The ante was upped further as they worked up a head of steam on Baker’s Daughter (more audience participation and everyone knows the drill) and Drunken Serenade that provides proof why you’ll see  Merry Hell filed alongside The Levellers, Blackbeard’s Tea Party;  good time live bands who know how to set up a party vibe, even in a seated room, and provide a thoroughly healthy dose of entertainment. It  explains why the Merry Hell audience is like a family reunion who  continue to return for more. Ladies and gentlemen, raise your teacups and glasses.

You can find Merry Hell  online

Harp And A Monkey online