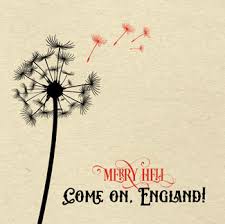 An alternative national anthem – and boy do we need something – Come On England! is a little collection of cheer and hope in troubled times.

Four tracks built around an anthemic, if not quite national anthemic track from the Bloodlines album (reviewed by Louder here). A hint of The Pogues in a calm moment as the Merries fairport their way in a nostalgic trip through what England means (or used to mean). Wandering paths, wild meadows of dandelions, woodland, river and bluebells. Thunderstorm summertimes and  fires in the snow all the while noting the influx of encounters with  greed, hatred and  robbers and racists.

We Need Each Other Now, also from Bloodlines, provides a similar sentiment. Are Merry Hell evolving into  protest singers? As they rise up, they almost strike a celtic Big Country vein that’s a whistle away from a bagpipe moment with the guitar break .

Combined with a taste of the forthcoming acoustic album Anthems To The Wind in Lean On Me, Love. Taking the political sentiment into a personal shift of direction, it’s a promising taster of what’s to come. If you’re not on your feet already punching the air yet, a final live blast through The War Between Ourselves – it’s their Meet On The Ledge moment, played at every Merry Hell gig – is a stadium/festival rocking version recorded in front of the ladies and gentlemen of Clitheroe at The Grand in February 2015, A fine establishment itself and prophetically introduced “the peace of the world hangs in the balance.” If only they knew.

A reminder of the Merry Hell calling card that’s all encompassing – uplifting, tear jerking, chest pumping and blood stirring. A celebration of unity, sweet liberty and community and a chance to boil the kettle and “raise your teacups and glasses”  to a spirit that refuses to lie down.

You can watch the video for Come On England here:

You can find Merry Hell online at https://www.merryhell.co.uk/