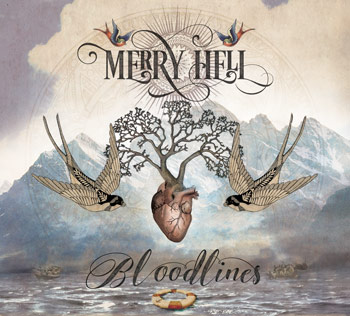 Merry Hell, emerging from the ashes of The Tansads, deliver an energetic blend  of folk rock from the North West. Now into their fourth album, their enthusiastic identity is once again captured on ‘Bloodlines’.

It’s what they’ve called their “togetherness album” – one on which all eight voices feature for the first time in what they call the full fat electric band and also one which is declared as their most overtly political to date and with the current state of the world why not?

It’s also defined as their most personal; not surprising with the band based round the core of the Kettle family – brothers John, Andrew and Bob plus John’s wife Virginia. The title track  appropriately explores heritage – the tag line  “where d’you get those eyes?” an indication of the personal level they’re hinting at. At the core though is a solid foundation of folk rock. Think Fairport and Oysterband and you’d not be far off the mark. In fact opener ‘We Need Each Other Now’ is a dead ringer for the Oysters.

Celtic elements abound and there are hooks aplenty.  ‘All The Bright Blossoms’ and ‘Sweet Oblivion’  are going to be the moments in the gig when the audience participation kicks in; the latter a folk and roll jug band trouser swinging celebration. Variety, the spice of life, comes thick and fast rom the sentimentality of ‘When We Are Old’  and  ‘Man Of Few Words’ to prison break songs;  from the clarion call of ‘Come On England!’  to  the defiant stance against selfishness in ‘Stand Down’, the latter something which could sit quite easily as a more aggressive and angry interpretation by The Levellers or Ferocious Dog before developing into a lively jig, their folk/punk roots briefly surfacing.

They go unaccompanied on ‘Coming Home Song’ and show they can do the more tranquil and stripped back traditional folk approach on the philosophical subject of resolving conflict in times of war. Ultimately what stands out is their philosophy which is bound around the call for togetherness as a response to personal or political strife and discord. An optimistic yet worthy message.

You can see the video for ‘Bloodlines’ here: