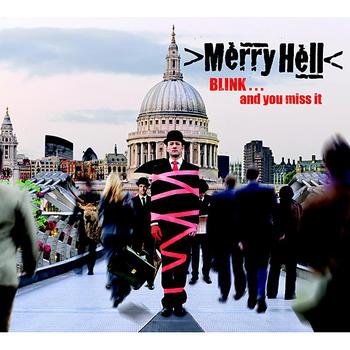 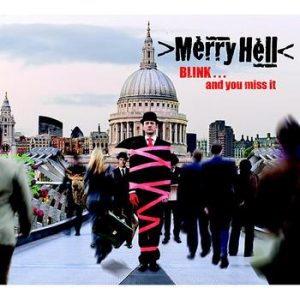 The debut album from the north-west based folk rockers Merry Hell who recently featured as a LTW new Band of the day ”â€œ the band name being lifted from a line within The Tansads song ”ËœSeparate Souls’; The Tansads were a Wigan based quasi folk/punk/rock outfit who released a total of five critically received albums, though inexplicably failed to break through to a mainstream audience. The Tansads re-grouped in 2010 for a couple of anniversary concerts at their spiritual home The Citadel in St Helens, and from those gatherings a decision was taken to take the continuing energy of The Tansads forward into a new era ”â€œ hence Merry Hell was raised.

Merry Hell in very short time have successfully earned themselves an enviable reputation for high energy gigs, anthemic songs and politically charged questioning lyrics ”â€œ the challenge was always to capture that energy, that vitality on record; ”ËœBLINK”Â¦ And You Miss It’ suggests them have done just that.

Opener ”ËœDrunken Serenade’ is a physical connection to The Tansads legacy, it being the final release upon their 1998 swansong album ”ËœReason To Be’ ”â€œ it’s everything Merry Hell offer shoe-horned into 2.36mins; the gravel voice of front man Andrew Kettle, his foil being his sister-in-law Virginia Kettle who provides warmth to Andrews vocal which sit atop a propulsive beat, shouty sing-a-long rabble rousing anthems; ”ËœOver The Border’ again features vocals to the fore, but includes an exquisite guitar melody and some tender harmonising. ”ËœThe Crooked Man’ is based around a rockier looping bass that will strike a chord as it confronts the financial wheeler dealers who successfully dragged the country deep into its current economic demise. ”ËœThe Butcher & The Vegan’ along with ”ËœRosanna’s Song’ are the most traditional folk tracks the former being an amusing and tender tale of an unlikely romantic pairing, whilst the later is set within the somewhat inauspicious location of Burnham-on-Sea; the sort of tales once told by Glenn Tilbrook. The album is tinged with darkness; lyrically it presents themes including unbridled love in the face of adversity ”â€œ ”ËœLean On Me Love’ with the line “when you’ve given all that you can give, and your wallet’s leaking like a sieve, when they’re repossessing where you live, lean on me love”Â ”â€œ however the darkness does not pervade, such is the sheer jauntiness of the music that despite the themes you will be left with a huge beaming smile upon your face.

What is transparent throughout is the sheer quality of the song writing ”â€œ the more folk based tracks do not allow for power chords, crashing drums etc ”â€œ as such these songs stand or fall purely on the songs, and Merry Hell have deftly mastered the art of song writing; this is easily one of the most impressive, and accessible debut releases in a long time.

There will be some reading this questioning the rationale of including essentially a folk group within the confines of a website whose DNA is basically punk rock ”â€œ Merry Hell is built around the nucleus of the Kettle family, they conceived the band, wrote the album, played all the instruments, produced and engineered the release, the lyrics question they challenge the system ”â€œ then they went and released the whole thing on a small totally independent label ”â€œ no sign of ”Ëœthe Man’ here, how much more punk rock do you want?

Merry Hell are clearly looking towards the future, it would have been easy to rekindle The Tansads, to try and reignite the fire ”â€œ however, and credit to them – Merry Hell are, and have largely succeeded in continuing the journey that their former band began, we can only hope this release will enable their music to be heard by the numbers they deserve… buy this album.