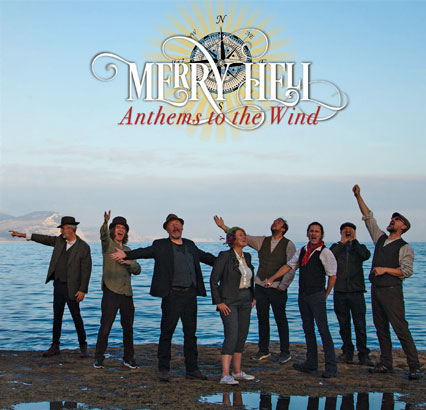 ANTHEMS TO THE WIND

An acoustic album that reworks songs from the relentless force of the ‘folk charabanc’ of Merry Hell.

And yes they do need to be seen live to appreciate that billing and no we haven’t broken our duck yet despite all the good intentions and promises made to the similar force that is Damian Liptrot whose work as the fifth Beatle in spreading the Merry word, is unremitting and ceaseless.

Regardless, Anthems To The Wind finds the band in unplugged mode – one they’re very familiar with to be frank – but no less passionate nor vibrant. The Kettle led band have added  Neil McCartney’s fiddle to the mix since many of these songs were recorded and it’s that added potency and energy that is celebrated here. Inspired, if that’s the right word, by what they call “the atmospheric hush” of the folk clubs (yes, sometimes you daren’t breath never mind risking the thunderous click of the mirror on a DSLR) the arrangements have been stripped back, yet recording much of the album with the band playing live makes sure that their zeal and ardour shines through.

The twelve songs are kick started by a Drunken Serenade (including The Banshee Reel) that does what it says on the tin and aside from ‘owt else, it makes sure that attentions have been grabbed – probably by the lapels and forced up against the wall. It also kicks off a  set that  alternates between Merry Hell letting loose on some joyous big band jamborees and joie de vivre, and  showing their more sensitive side with more reflective moments. The Butcher And The Vegan reinforces Macca and Jacko’s vision of ebony and ivory, or indeed any extremes on the same spectrum,   living together in perfect harmony, but it’s the energy of the uptempo party pieces that gets the blood and the knees pumping. Yet having said that and for however much we’ve enjoyed the rollicking acoustic versions, Leave A Light On and Satisfied close out the record on a note that’s both heartfelt  and tender.

Here’s Loving The Skin You’re In taken in  acoustic form and channelling a bit of fist pumping Levellers styled passion: